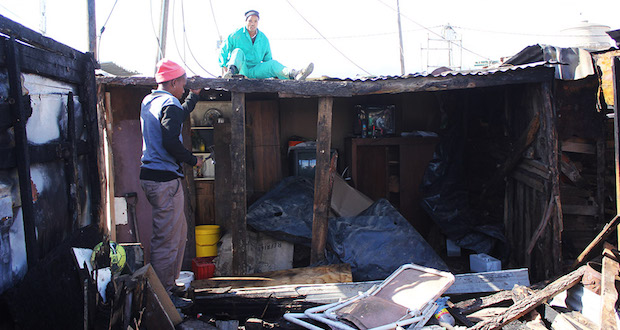 A shack fire has left about 200 people homeless in the David Nkanti township near Lwandle, Strand. The fire started earlyÂ Wednesday morning, as residents were heading to work. RAâ€™EESA PATHER was there as they attempted to pick up the pieces of their homes and begin to rebuild. David Nkanti is small settlement in Strand. The fire started shortly after 7am. Many residents, who had been headed for work, turned back after seeing the smoke or receiving phone calls from family, onlyÂ to find their belongings already in ashes. Residents pull burnt material from the rubble to rebuild new shacks. They need poles, corrugated iron sheets, and pallets to make new homes. Although they were waiting for the municipality to provide new material, residents started rebuilding quickly, usingÂ whatever materials they could salvage for fear they would have no place to sleep on Wednesday night. Children dig through the debris for nails and anything else they could find to help their parents rebuild their homes. Thomas Semango pushes a burnt cupboard from what remains of his shack. Residents in the informal settlement are impoverished and have little means to replace what was lost. Inside Semangoâ€™s shack, the remnants of his breakfast sit on what was once his stove. Everyday items like pots, stoves and cupboards will be expensiveÂ to replace. Residents use spades to dig holes in the sand so they can pitch the poles around which new shacks will be constructed. Some waited, hoping the municipality would arrive soon with newÂ building material. Community organisers take down the names of people affected by the fire. They record the possessions that were lost and hand the data over to the municipality, which willÂ then see to the residentsâ€™ needs. Congestion in the settlement helped spread the fire. With the shacks built so close together, the fire passed easily from one home to the next. As the afternoon wore on, a tired man sat down to eat a sparse meal. Eighteen-year-old Esihle Villem was at school when one of his peers told him about the fire. He hurriedÂ home to help his father clean up the mess and rebuild their home. Villem is determined not to let the fire disrupt his future.

â€œThis will not have any affect on my future, because Iâ€™m going to build a new shack and itâ€™s going to be fine,â€ heÂ said. People take down the remains of aÂ shack that burned butÂ remainedÂ standing. Burnt shacks would be replaced with new ones, and in the meantime, the old material was salvaged in case it was needed to provide shelter for the night. Wiseman Makhasi sits on her bed in the middle of the settlement. It isÂ one of the fewÂ possessions she managed to save before her shack was razed to the ground. Like many around her, she doesnâ€™t know when she will be able to fully rebuild herÂ home or whether she will be able toÂ replace everything she lost.

â€œI feel sad and worried. Thereâ€™s nothing left of my shack,â€ Makhasi said.

All images: By Raâ€™eesa Pather.