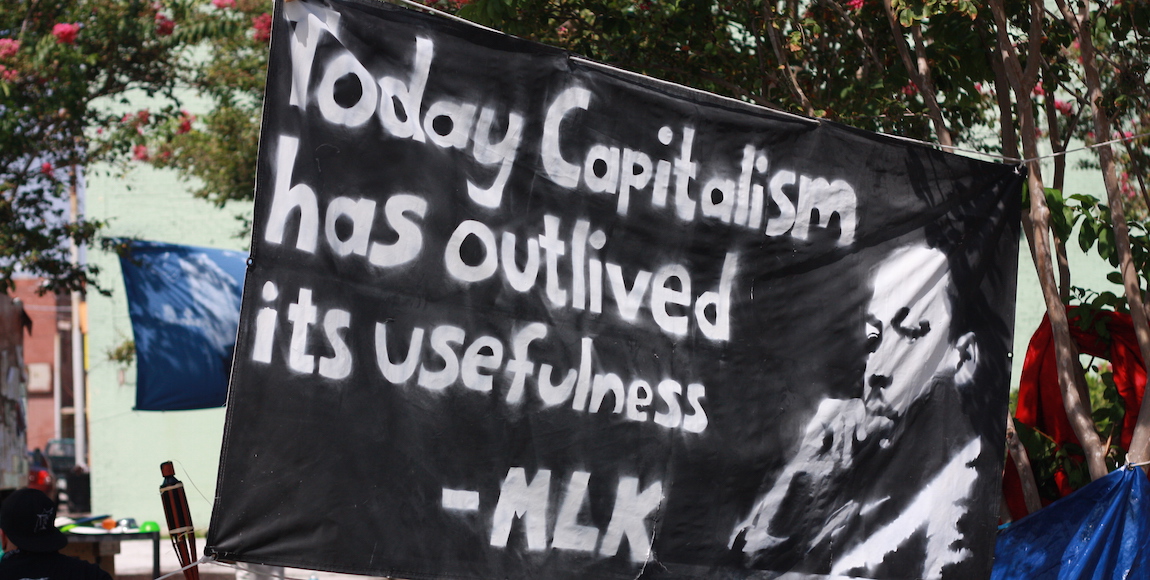 The Economic Freedom Fighter protest against H&M stores in South Africa has caused controversy both locally and overseas. People are calling their actions “unnecessary hooliganism, mindless vandalism and a shaking of democratic values of peaceful protest.” But this narrative is fundamentally misguided.

Monday was Martin Luther King (#MLK) day, and while many South Africans were debating the actions of the EFF, in doing so they were unwittingly paying homage to MLK’s contested legacy. King, an icon often likened to Mandela, is generally celebrated for his dedication to peaceful civil protest in the face of grave racial injustice. Many likely believe that MLK would turn in his grave at the actions of the EFF. But the lesser known history of MLK is that he held strong radical views on black resistance, anti-capitalism and the ethics of protest.

MLK argued that the greater obstacle to racial justice was not the Klu Klux Klan but â€œthe white moderate, who is more devoted to “order” than to justice… who constantly says: “I agree with you in the goal you seek, but I cannot agree with your methods of direct action”.

He defended riots, saying “[Intolerable] conditions are the things that cause individuals to feel that they have no other alternative than to engage in violent rebellions to get attention. And I must say tonight that a riot is the language of the unheard.”

The point here is that according to one of our heroes militant dissent and riotous behaviour are not incompatible with a just and caring society – they have in fact been fundamental in moving towards one. If we are to celebrate figures such as MLK, we also have to recognise that sometimes an obsessive hold to political order and the confines of the law is misplaced. Direct action and the destruction of exploitative and apathetic industry – such as H&M – is historically embedded in democracy. Popular claims that resorting to direct action are signs of barbarism, lack of civility, stupidity or a mindless thuggery are quite simply historically inaccurate – and in a South African context, these sentiments are often tinged with a thinly veiled racism.

So no, it is not irrational or mindless to take direct action against entities that seem immune to honest accountability by other means. What is irrational is our pretence that businesses such as H&M view the backlash against them as anything more than a public relations exercise – that the apologies they dole out are anything more than damage-control to protect their brand. And as a reminder, this is not H&M’s first racist incident.

In South Africa racial hatred, victimisation and inequality remain entrenched within our daily lives. It is within this context that H&M’s careless disregard for racial slurs pours salt on open wounds. Calls that people are overreacting ignore the historical evidence and personal accounts of how dehumanising it is to be referred to as a monkey. And whether it’s the mother of the child who wore the infamous hoodie or anyone else, no one gets to tell people how they should react or feel about the perpetuation of generations of harm. In a country such as South Africa, taking action against racism will always be valid. The fact that it happened to a company that is also guilty of unapologetically exploiting workers and children, is honestly a plus.

But does all this mean we should believe that EFF are saintly defenders of justice? Definitely not. Any reasonable person is deceiving themselves if they believe the EFF’s timing, choice of H&M as a target and sudden unapologetic embrace of radical action were not influenced by political opportunism.

It was not coincidental that the protest which garnered international attention took place at the very same time when newly elected ANC president Cyril Ramaphosa was giving one his first public addresses – selling his vision and hopes for South Africa to a media-base that seems to adore the prospect of him as a leader.

It was not coincidental that the EFF chose the viral narrative of H&M’s hoodie over lesser-known, but possibly more insidious examples of injustice. Where was their direct action against Spur for bowing to racists, their trashing of Steinhoff brands, their protest against corrupt business cartels, ABSA, KPMG, the dop system, the hiring of sex offenders into our SOEs or the occupation of Helen Zille’s property for her defense of colonialism?

It is not coincidental that the EFF suddenly decided to be unapologetic about breaking the law if it means taking action against racism. In 2016 at the EFF march against Zuma in Tshwane, EFF leadership called their own members criminals and ANC agent provocateurs for attempting to vandalise and petrol bomb the statue of Paul Kruger – a figure the EFF themselves have called a colonial racist. Where was their unapologetic dedication against racism then? Why the inconsistency? In 2016 it was no doubt more beneficial to project the image of law-abiding protectors of democracy as this drew appeal in contrast to the ungovernable image of President Zuma. It’s now seems that radical activism is the preferred narrative to capture support from those who are dissuaded by the perception of Ramaphosa as the darling of neoliberalism.

But the presence of political opportunism does not invalidate the EFF’s actions, it only marks them as politicians. There’s no contradiction in supporting activism but remaining wary of duplicity. The cause and praxis remains legitimate, even if the EFF may not be.

Because at the end of the day people should be angry when it seems the norms we live by continually step on the dignity of those at the bottom of the ladder. We should be angry when it seems powerful entities have found comfortable routes to shrug off substantial accountability. In such cases action needs to be taken to draw attention to the contradictions that exist between our supposed values and the way the world is. And the greater the disparity between our values and the norms of society, the greater the need to jolt society in the direction it should be.

As MLK put it: “It is not enough for me to stand before you tonight and condemn riots. It would be morally irresponsible for me to do that without, at the same time, condemning the contingent, intolerable conditions that exist in our society.”

To this end, we should stand by the EFF’s actions against H&M – as we should stand by any action that unsettles the chokehold that exploitative multinationals, governments and individuals have on people’s dignity. But if the EFF or any other body is to remain consistent in its purported dedication to radical justice, they need to move beyond acting only when it is opportune to do so. And hopefully in the future their calls for radical action will be on issues more substantial than a hoodie.