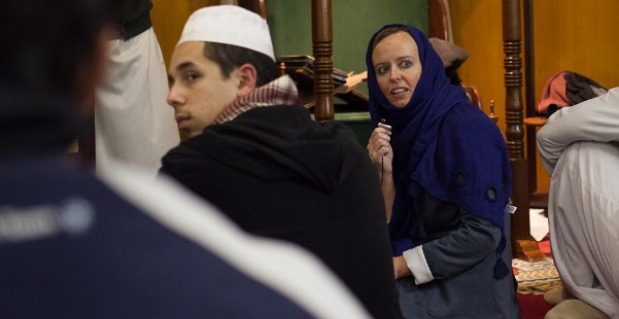 DESHNEE SUBRAMANY responds to Rebecca Davis’ latest column and the Twitter spat that resulted from Davis’ talk at the Claremont Main Road Mosque on 23 June.

â€œDamned if you do, damned if you donâ€™tâ€ may sound like a typical comment on any news site that allows white people to complain about how they â€œjust canâ€™t winâ€ in South Africa anymore. And that basically sums up Rebecca Davisâ€™s dangerous opinion piece of the same title in the Mail & Guardian on Friday.

Davis explains her pain with being white, and how that replicated itself after she faced â€œbacklashâ€ from â€œthe Twitteratiâ€ – referring to three people (including me) who tweeted after local news site The Daily Vox wrote a story about her visit to a mosque to talk about homophobia.

I retweeted the article titled â€œRebecca Davis is helping this Cape Town mosque address homophobiaâ€ with the comment: â€œThere are no Muslim feminists doing this orâ€¦? I donâ€™tâ€¦ OK.â€

That tweet was not about Davis. Itâ€™s a shame this even needs to be spelled out. The Daily Vox, whose tweet it actually was, didnâ€™t respond, save for liking my response. But somehow Davis felt touched, perhaps because it got a few retweets and likes from others.

The tweet was about the â€œprogressiveâ€ Claremont Main Road Mosque. If it was that progressive, why was a white person asked to do the talk? That was the only conversation I sought to open, and it was also the only question I asked Davis after I saw two others engage with my tweet.

This is not the first time Iâ€™ve seen Davis react prematurely to a tweet. She once asked for comments about black hair products, to which someone responded â€œBlack twitter, please help white twitterâ€ – phrases and names those of us on the social media platform for longer than 10 minutes are quite familiar with. She responded saying she needed help because she doesnâ€™t use the products herself, and said she was not looking to â€œatone for apartheidâ€. I canâ€™t quote verbatim because it seems that tweet no longer exists.

Thereâ€™s no need to explain further what transpired last week – itâ€™s on Twitter and free to read. But whatâ€™s scary about Davisâ€™s piece is how a comment that was not about her, suddenly became the topic of the top piece in “Africaâ€™s best readâ€™s” newsletter mailer on its publication day.

Davis was able to drudge up all her self-pity and put it into a few hundred words, pretending that it was unique to her as a white. This might be surprising to her, but all the doubt and criticism she speaks of is what so many middle-class people go through, not whites (or her) alone. The constant aching anxiety of â€œAm I doing the right thing?â€ is normal life to most of us who think we understand our socio-political status. And we donâ€™t get to write up how someone hurt our feelings on Twitter after we thought we did such a good job conversing with other people.

When blacks talk to whites (and sometimes to each other) about controversial topics, itâ€™s usually violent and painful, and sometimes avoided until absolutely necessary. For example, how do I as a black woman writer explain to my white man editor that him asking me to clean cups that heâ€™s left behind is sexist and racist, without feeling that my job may be put in jeopardy? By virtue of her privilege, Davis can be offered the opportunity to interlope and approach homosexuality with merely â€œa sense of curiosity about how the topic would be engaged withâ€. Must be fun.

How a homosexual Davis is seen by the parents and siblings of the Muslim community compared to how someone of that space is viewed for the same reasons is completely different. She is aware of this, as she explains: â€œâ€¦ the feminist issue of Muslim women veiling is one that I simply donâ€™t feel particularly entitled to have an opinion onâ€. So to be dumbfounded by the tweets questioning what was going on is confusing.

And to drive the whole point home for me (because there are plenty other people who say it better than a black woman, right?), a man named Shuaib Manjra jumped to Davisâ€™s defence, saying: â€œHere you have progressive mosque attempting to advance this issue and all I find is bitching!â€. He also told me and the other black person tweeting to â€œwork on that chipâ€.

How did it come to be that Davis was allowed to self-deprecate and humanise her privilege with cute anecdotes of a stolen bar stool, drunkenly throwing R10 from a balcony to a man on the street, and how much she hates her liberal self, only to concede at the end in a single paragraph that the points raised about the very serious privilege of being white and an out-and-proud atheist lesbian in a mosque probably had validity? More importantly, why else would we have brought it up?

I think the answer may be that Davis surrounds herself with too many people allowing her to be the Good White, while ignoring her Becky-with-the-bad-politics tendencies. That, or her satire skills really need to be honed.

Deshnee is a digital editor, eater, and passionate whiteness crusher.