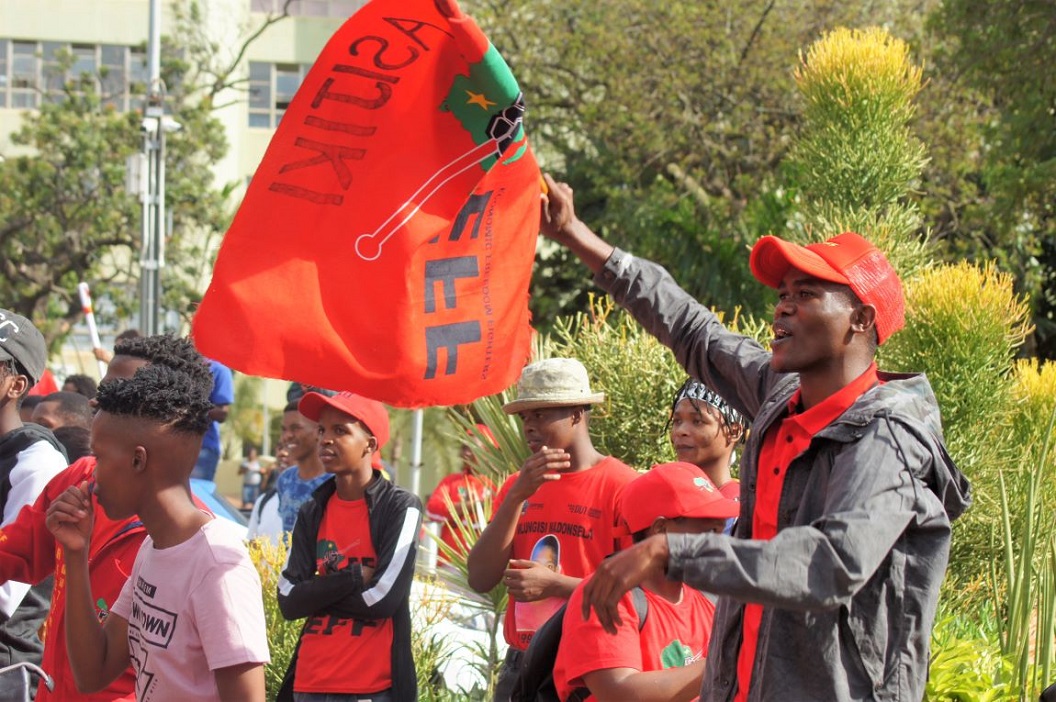 The Economic Freedom Fighters Student Command (EFFSC) is holding firm at the Durban University of Technology (DUT), in spite of several high-profile incidents of strife. This is as the university continues to be hit by protests over various issues.

June marked 10 months since the EFFSC took over the student representative council (SRC) at the DUT, and although some issues persist, the current student leadership has presented a united front. Unlike the previous SRCs, where factionalism was loud and detrimental for the masses of students.

In February this year, EFFSC member Mlungisi Madonsela was killed during a protest over registration and accommodation at DUT. The shooting had a rallying effect on the EFFSC and SRC, even as protests on campus continued.

Early in June, the SRC president Sesiyanda Godlimpi was suspended by the institution, following an alleged misconduct; the party came out in full force and rallied behind him.

Godlimpi’s precautionary suspension came after the SRC called on the management to register all the students who had been attending classes the entire first semester without being registered. Management believes that during a confrontation between staff and SRC members, there was verbal attacks and intimidation against staffers.

Soon after the Godlimpi suspension, another six EFFSC members were also suspended on charges of intimidation, physical and verbal attack.

Since 2015, the Daily Vox has been following the struggle of students in KwaZulu-Natal universities; with accommodation and funding topping the long list of issues.

The issues at DUT have persisted long after other campuses have quieted down.

One of the issues that students have been at loggerheads with the management over, is a NSFAS money payout system called S-bux, which was rooted out early this year after calls for it to be scrapped had fallen on deaf ears, for years. The EFFSC made it a central priority to have the system removed.

In April last year, the Daily Vox reported how the Sasco-led SRC had failed to effectively engage university management on behalf of students.

However, the current SRC in its tenure seems to have had the grip of things. Like its parent organisation the EFF, the EFFSC has been a consistently radical agitator.

The Daily Vox has been following EFFsc led protests at DUT, and has witnessed students fighting in full force for accommodation and funding.

Since it took office, the organisation has been at loggerheads with the management. Recently, EFFSC has accused management of colluding with opposition parties on a quest to stop them from fighting for students.

The organisation went on to allege that management has paid out R10,000 to the said organisation to use as a means to lure students into the campaign.

The allegations have been refuted by the management, dubbing them an attempt to cause chaos ahead of upcoming elections.

“The University Management has no preference in who is elected as the 2019/2020 SRC but Management has a responsibility, to ensure compliance with the Council approved SRC constitution.

“The University strongly refutes both of the allegations.  However, the seriousness of these allegations warrants further investigation and the University invites any aggrieved party to submit concrete evidence to the relevant University authority,” said senior director of corporate affairs Alan Khan to the Daily Vox.

While politics continue to be at play at DUT, the ANC-aligned Sasco, continues to struggle.

However, with the allegations levelled against them by EFFsc, the organisation says it’s politics at play.

According to Sasco’s Zola Mzimela, the EFFSC is failing to resolve some of the issues they also failed to resolve and now resorting to using them as bait.

“We are approaching election season soon and EFFSC realises now that they are unable to solve some of the issues they promised to solve. They are now using anything to play with students’ mind, remember, we are in politics. They are just afraid of losing power back to Sasco come election time,” he said.