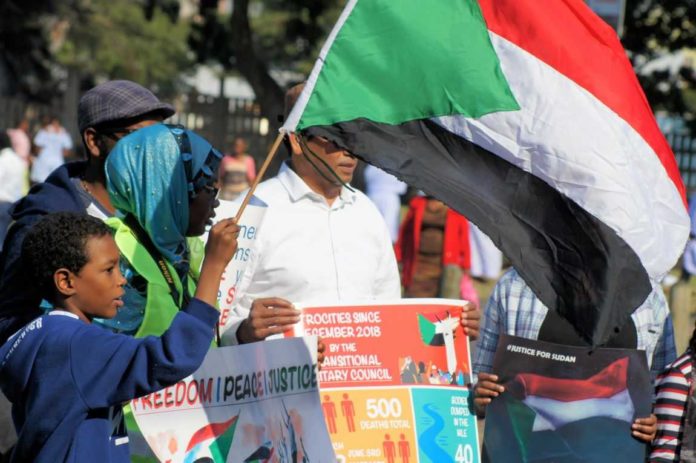 “Yesterday was the million man march which was successful beyond measure,” said Reem O. M. Gaafar, a Sudanese doctor, writer and documentary filmmaker on July 1. On June 30, an estimated thousand Sudanese people took to the streets of the capital Khartoum and other parts of Sudan in protest. The march was organised by the Sudanese Professionals Association (SPA).

UPDATE: Protest leaders and the transitional military council (TMC) in Sudan have reached a deal to form a “joint civilian-military ruling body, which will install a new government and parliament for a transitional period of three years.” Following this agreement, and after a court order, the internet which has been shut since June 3 has been slowly restored.

Ramey Dawoud, a Sudanese hip hop artist and actor told The Daily Vox that with the internet still down, he has only been able to contact people via direct call on their landlines. He says while there has been a feeling of depression and shutdown because of the June 3rd massacre, the June 30th marches changed the feeling on the ground.

“The millions protest has had a tremendous effect on the morale of the people. Hope, excitement, and the spirit of the revolution now seem to be at an all time high,” said Dawoud.

Amidst anticipation of a pushback by the Transitional Military Council (TMC) and Rapid Support Forces (RSF) the people of Sudan came out in their numbers on the streets. Gaafar says they were “in shock about the sheer number of people who turned out.”

People in Sudan spent the days before the June 30 march preparing for it. “There was a lot of activity around getting the word as far and wide as possible without internet by sms, distributing flyers, walking around neighbourhoods chanting about it, and even distributing invitations in weddings and social events,” said Gaafar.

According to Gaafar there was an estimated 97,000 people on just one main road in Khartoum. There were many marches around the country. Each of these were met with violence from the military. At the latest report from the country, the death toll sits at 10. More than 180 people were injured during the march.

“As usual protesters have been targeted with tear canisters directly to the head and eyes,” he said. The TMC said the casualties were the fault of the protest leaders who changed the route of the march towards the military headquarters and presidential headquarters.

Opposition leader Ahmed Rabie said: “The TMC bears full responsibility for what happened yesterday … We hold the TMC responsible because those who were killed were shot under the eyes of the security forces, which either killed them or failed to protect them.”

On June 3 when the military attacked protestors having a sit-in outside the military headquarters, they also shut down access to the internet. Gaafar says that mobile internet which is most widely used is still cut off.

“Only landlines running, but roaming international number sim cards have been sent in and that’s what people are using inside while people outside recharge them,” Gaafar said.

Just the weekend before the June 30 march took place, there were mixed messages about the way forward for the country. Forces of Freedom and Change (FFC) said they’d accepted the terms of an Ethiopian plan. In contrast the TMC said they’d accepted unknown plans from the African Union (AU). Gaafar says the council are telling everyone they want to negotiate but “keeps harassing and arresting the people it should be negotiating with.”

She says the council have gone ahead with working on issues that are the responsibility of a functioning government. “They are also talking about forming a civilian government themselves, and they have lots of parasitic opportunistic supporters that are more than happy to join them,” said Gaafar.

For Gaafar the Ethiopian peace deal is a “complicated and irritating matter.” She says the Ethipioan deal suggests that seven generals and seven civilians from FFC plus one civilian that both parties agreed on, and rotating head of the council. However, the seven generals are likely to include Mohammed Himedti the notorious army general and current deputy head of the military council.

In interviews with African Arguments many Sudanese women have said their main demand for the future is gender equality. One of the women they spoke to was a member of the coalition known as MANSAM, which consists of 8 political women’s groups, 18 civil society organisations, and several youth groups.

The group is one of the signatories of the 1 January Declaration of Freedom and Change however, they have not been represented in any of the talks with the TMC. This has led to many calls being made to include women in future decision-making.

Gaafar makes it clear that the deal has been accepted by the FFC. “The protesters have not accepted the Ethiopian peace deal,” said Gaafar adding that protestors “want a civilian government and complete removal and criminal charges against the current TMC.”

“The ultimate plan is to keep pressuring both the FFC and the TMC to handover to a civilian government,” said Gaafar.

Currently Dawoud says the FFC put out a schedule which includes nightly neighborhood processions and awareness campaigns. Another “millions” protest has been planned for June 13.