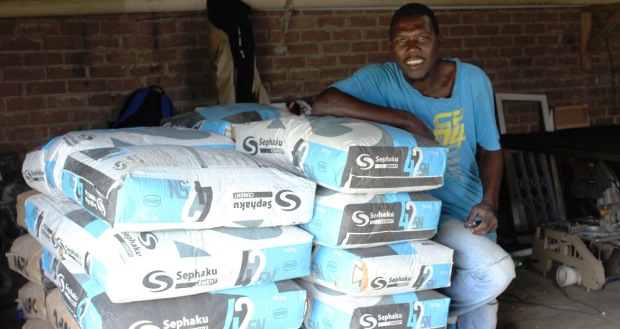 34-year-old SBONGISENI NGCOBO, from KwaNongoma in Kwazulu Natal, Â was convicted of murder when he was 15 years old, and served half of a 20-year sentence. Without any qualifications and with a criminal record, he now runs his own brick-making business and employs four people. Qiniso Mbili spoke to him aboutÂ bricks, being “on the inside” and running his own business.

I grew up as a very angry child. This was further perpetuated by the culture of my environment, where boys would often fist-fight just because they were bored. I grew up knowing that no one was allowed to mess with me – I would usually be the one to win at these fights and would never allow another boy to beat me. As aggressive as it was, I enjoyed my short-lived childhood.

One evening I returned home late, when my mother would usually have come back from work already. But that evening she was not home and this was strange, but I did not pay attention to it. The elders were a bit more worried than I was. I went to sleep and expected to see her in the morning. When morning came, she was still not back and I could not go to school that morning. This was the time to worry; everyone was calling relatives to find out if they had seen her. When everyone had given up on the searching, we were notified by police that my mother had been found dead in a valley, not too far from home, with her throat slit.

My life changed for worse because I quit school immediately and focused on cigarettes and alcohol. My mother was buried, and I was never the same person again.

Weeks passed after her death and no one was arrested, but it was rumoured that two local boys were responsible for the death of my mother. Someone claimed to have seen them dragging her. I knew these two boys as they were notorious thugs and it was not hard to believe word on the street. They were both years older than me – men in their early 20s.

They were taken in for questioning by the police but that was it, they then disappeared for a few months as they knew that everyone knew it was them. One day I saw one of them was back in the village. I saw him once and he couldnâ€™t even look me in the eye. I knew he had done it. The second time we met, we were at a tavern. There was a strong tension between us but he did not leave because he knew I was a kid. I drank a lot that evening until I got drunk and decided to go home and fetch a knife because I was going to confront him.

When I came back, he was still there and I got angry at his guts to walk freely after what he had done. I walked up to him and asked him where he was on the day my mother died. He grabbed me and told me I was a small boy who shouldnâ€™t talk about things he doesnâ€™t know anything about. I drew my knife and stabbed him three times, one deep wound in the neck and two jabs to the chest. He fell down the same time, everyone was looking at me in awe, and I ran out. I moved away from my house without telling anyone what had happened. I stayed at my cousinâ€™s house and a week later I was arrested and charged with murder.

The most stressful thing inside is thinking about what will you do with your life when you are outside without a matric certificate or any other qualification. In 2007, I was let out on parole. I realised my life was sinking, I couldnâ€™t live on handouts all the time, I had to do something.

I hooked up with Vusi, a friend I had met in jail. He introduced me to this guy who hired me in his brick-making business. His business was suffering because he did not have enough employees and did not deliver on time for customers. A few months later he gave up on the business and sold me the brick-making machine cheaply. He told me I could use the workshop for free while keeping watch over his house.

I worked alone for quite some time, cooking one brick at a time and always kept up to clientsâ€™ deadlines. Business was booming and soon enough I could afford a new brick-making machine which cooks four bricks at a time and I employed four people. I have since been able to afford to buy the whole workshop, the house and a van for deliveries. On top of that, I get the fulfillment of knowing that four people go to sleep on a full stomach because of me. I am now a proud owner of the whole business: if you see a new house here at uMgababa, it’s most likely that my bricks were used.

Violent crime is wrong, any kind of crime is wrong and does more harm to the perpetrator than it does to the victim. Young people need to focus on their future and resist any form of criminal acts. When I killed a person I was in a different stage of life. I did not wait for that time to pass, I acted on it and that should be the difference between me and you. This has held me back for ten years. My business has grown so much in the past eight years since it began, imagine how big it would have been by now had I not lost ten years of my life?

If people can afford varsity, then it is good for them to go there and study. But for those who can’t afford university, you need to start thinking of ways you can make money. Look at your community, identify their needs or wants and then capitalise on them. Even for those who went to university, you need to start thinking of business, people need to work on their own dreams, if you work for a company then you are working for someone elseâ€™s dream.

I lead a peaceful life now and very proud of being able to work for my own self. I wouldnâ€™t have it any other way.

As told to Qinio Mbili, edited for brevity and clarity.
Images by Qiniso Mbili