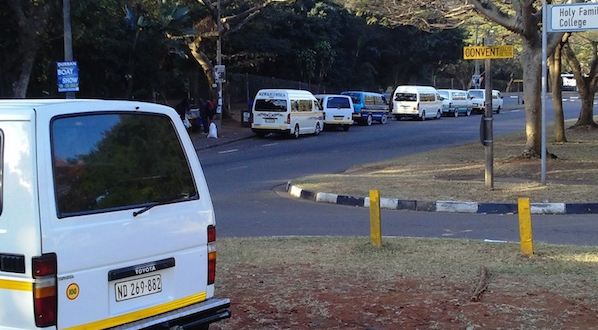 An intrepid South African couple, Lionel Faull and Kate Laing, is trekking through the continent using only public transport. Starting in South Africa, they are travelling about 7,000km through Mozambique, Zimbabwe, Zambia, Malawi, Tanzania, Kenya, Uganda and Rwanda. The pair is documenting their journey on a travelogue called Public Transport Diaries.

Even in South Africa, the significance of public transport is evident in the chaos that ensues every time there is a taxi strike. â€œRaising the topic of transport and travel never fails to elicit a reaction from someone, no matter their income level or the regularity with which they do or donâ€™t take public transport,â€ they write.

As well as looking for an adventure, they also have a vested interest in seeing this journey through. Faull is an investigative journalist at the Mail & Guardian Centre of Investigative Journalism (AmaBhungane) and he focuses on infrastructure-development plans in the transport and energy sectors. Laing is a strategy consultant in the transport and water industries, with a keen interest in developing countries.

In December 2014, Faull and Laing started their seven-week expedition. So far their blog has revealed that relying on public transportation (excluding flights) in Africa, is a time-consuming, unreliable and often tiring experience.

â€œJust when you think youâ€™re there, however, travel throws you a curve ball. Within 2km of Vilankulo, a 16-wheeler truck carrying copper rods had jack-knifed in the sand and blocked the road. With nothing for it and no toilets nearby, we hoisted our backpacks and walked the remaining 4km to Baobab Backpackers,â€ they explain in a post about their trip from Maputo to Vilankulo.

The pairâ€™s decision to go on this journey was a choice, but for many other people public transport is the only way to travel â€“ even if the conditions are below standard. On their trip from Lilongwe to Mbeya, Faull and Laing met a man who was travelling to visit friends.

â€œThe next day at 6pm we presented ourselves in the same alley and joined the motley crew of travellers. This included two nuns, one Brazilian and one Malawian; a woman in burqa with her two children and three suitcases; and Paul Ndjambula, a Namibian, who had arrived on a bus that morning. He was travelling through to Dar Es Salaam to visit friends for four days before taking the same bus trip back home.â€

– Featured image: Taxis in Durban by The Daily Vox.