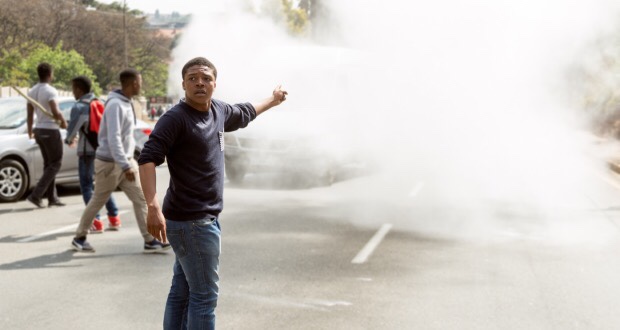 On Tuesday night, after students at Howard College UKZN assembled to discuss their protest action, a voice note was shared on social media warning students about destruction set to take place on Wednesday morning.

â€œThe strike is carrying on and if I were youâ€š unless you want to be part of the strikeâ€š I wouldn’t come to campus because tomorrow it’s basically mass destruction. So you come at your own risk or you don’t come at all,â€ the unidentified voice is quoted as saying.

The Deputy SRC President at Howard College UKZN, Sunshine Myende told the Daily Vox she was uncertain about where the message came from.

â€œI donâ€™t have any information on the person that recorded the voice note but it is not an official SRC statement. However, if the students mandate us to take to the streets for free education among other issues, then we will,â€ said Myende.

On Thursday morning, residence entrances at the Pietermaritzburg campus were set alight when students gathered in protest. Police fired rubber bullets, stun grenades and tear gas at students to deter them from marching in the streets. A broke out when protesters allegedly threw stones and bottles at the SAPS.

According to Nomonde Zondo, deputy president of the PMB SRC, the student who was shot in the arm by the SAPS had suffered severely.

â€œI have my doubts about what kind of ammunition was used. The doctorâ€™s report says her bone is broken so she was scheduled for an emergency operation last night,â€ says Zondo.

Soon after the showdown, SAPS arrested eleven students and took them to the Alexandra Road Police Station where they were held overnight. They appeared at the Pietermaritzburg magistrateâ€™s court on Friday morning, where they were denied bail and will appear again on 30 September.

â€œApparently the arrested students will be detained for seven days. The guys are going to New Prison here in Maritzburg and the girls are going to Westville Prison,â€ Zondo told The Daily Vox.

There was a large police presence on the Howard campus on Thursday, but mass student meetings continued without incident.

On Thursday, UCT Vice Chancellor Max Price invited all stakeholders to take part in a picket at parliament to address the current crisis in higher education. The picket was initially proposed by UCTâ€™s faculty of Health Sciences but was rejected by student leaders within their faculty because of divergent stances on key issues and students believing it hypocritical to protest with the same individuals who are have excluded students for the very same cause.

â€œStudent leaders met the health sciences faculty and deans to ask them what their stances are on particular position like the militarisation of campuses, free decolonised education and a doubling of spending to higher education to 1.5% of GDPâ€, said Sinawo Thambo, one of the prospective SRC candidates leading the #ShackvilleTRC movement.

As a result, the students leading the protests at UCT rejected the parliamentary picket and deployed a group of students to call out the picket at parliament.

Thambo says that the group of students brought some students and the media back from the picket to a briefing, where students of #ShackvilleTRC read out their full statement outlining their disassociation with the picket, disagreement with UCTâ€™s stance on free education and rejection of any grouping of Sasco groups related to the ruling party.

On Friday, UCT students travelled to Stellenbosch University and protested in solidarity with the 11 suspended Stellenbosch students.

UCT remains shut down until Sunday 25 September but students plan to continue with their shutdown come Monday until an agreement is made with UCT management on their demands.

Classes at Stellenbosch University have continued as usual this week. The university cracked down on students, hoping to quell the protests by suspending 11 students on Wednesday and serving 30 students with an interdict on Thursday. The suspended students are awaiting disciplinary proceedings.

â€œStudents and staff have a right to peaceful protest. However, the occupation of buildings, the interruption of classes, tests and study sessions, the threats and verbal abuse, and the physical assaults that we have experienced the past few days have been contrary to the values of our institution and completely unacceptable,â€ said Vice-Chancellor Wim de Villiers in an email sent sent to students on Thursday.

The Stellenbosch FMF movement is not lacking in internal politics. There are divisions on the basis on patriarchy and feminism. Ashanti Kunene, one of the student protesters said students need to remember that â€œnobody owns the revolution.â€

Protest action continued on Thursday morning at the Tygerberg campus. The protest was dispelled and followed by discussion between staff and students. According to de Villiers, â€œthe meeting concluded with a commitment to keep on talking and working towards a mutual understanding of pertinent issues.â€

De Villiers refused to address students, but Dean of Students Tonia Overmeyer met with students to receive a memorandum of demands on Friday afternoon on the Rooiplein regarding Fees Must Fall. A mass meeting then took place to decide on a way forward where UCT students were also present.

Following the meeting, students marched through campus shutting down university buildings on their way.

On Tuesday, the University of Fort Hare announced a 0% fee increaseÂ for 2017.

The announcement was made following the studentsâ€™ demand for the university to announce its position in 48 hours.

All students will be exempt from fee increases as most of the students at Fort Hare are among the NSFAS and missing middle categories.

There has been no academic activity at Fort Hare this week. The students have been participating in a stayaway since the 13th of September and talks with management are ongoing. The stayaway is concerning poor security at the university.

The stayaway is institutional but not completely unrelated to FMF. â€œIn our memorandum to the management, one of our demands is the rejection of the zero-fee increment but a proposal of free education. The protests at Fort Hare are FMF related but also have internal issues that we encounter as an institution,â€ said PASMA chairperson, Zukisani Nyewe.

After a meeting between students and management went awry on Thursday, but in an indirect Fees Must Fall protest, a building on the Alice Campus was torched.

â€œWe are always harassed by the police and we canâ€™t organise ourselves,â€ Sopazi said.

Despite being committed to free and decolonised education (and not a zero percent increment), it is unclear whether the students at Fort Hare will be able to formally mobilise for Fees Must Fall in the coming weeks.

The University of Free State (UFS) had suspended academic activities for the week due to protests.

The SRC at UFS drew up a plan to speak to the corporate sector on Wednesday, march to the provincial government on Thursday and consolidate responses and a way forward in a mass meeting on Friday.

There have been scuffles between EFF-aligned and SRC members. There is also with AfriForum who have started a petition to reopen the campuses.

Management has taken a leap by committing to supporting the Free Education Movement (FEM) of UFS students and helping them build proper structures.

On Friday, UFS management, SRC members and student leaders led the students in a march to the provincial legislature. The Public Gatherings Act was read to the protestors to encourage a successful demonstration and full cooperation with SAPS regulations.

Member of Parliament for the ANC and June 1976 student protester Manana Mechoara addressed the students in front of the provincial offices. â€œMy children, what is happening now is not what we fought for. Let me tell you what we fought for and what we demand right now. As a parent, a member of the ANC and a member of parliament I want to say that we are not doing right by our children. We are taking our rights as per the Constitution of South Africa which is the supreme law of the country,â€ Mechoara told assembled sudents.

Students and university management were preparing themselves for the SRC elections this week. Minister Nzimandeâ€™s announcement was scheduled just before the final SRC circus. The gathering quickly turned into a mass meeting and students decided to shut down the university.

PYA student activist Mxolisi Ngulube says it was the EFFSC and PASMA students who disrupted classes, stopped the elections and shutdown the university.

â€œCertain individuals of UP24 were caught on camera and they are not supposed to be seen on the forefront. People are facing charges but they still insist on giving the prosecutor something to work with.

â€œI think it didnâ€™t really start of well. Students from DASO and other organisations agreed that free education has to be addressed but we wanted to have the elections first. I donâ€™t know about the leadership, it’s still the same people who are 5% of the university speaking for the majority of the students.â€ said Ngulube.

Amla Monageng, chairperson of EFFSC at UP said that students and PYA members got into a physical altercation about whether we should proceed with a shutdown or not at 5pm on Tuesday evening.

â€œStudents agreed on Thursday that the protest was a national crisis. They said government operations and the private sector must shut down so we can coordinate nationally. In the meantime, we canâ€™t have TUT and UNISA operating while we are shut down at UP,â€ said Monageng.

University of the Witwatersrand

Wits SRCâ€™s Secretary General Fasiha Hassan spoke to The Daily Vox on Thursday night. â€œThursday was a very productive day for the student movement. We had a mass meeting at 2pm to introduce the SRC leadership to students so that they know who they’re following, but it was also strategic because task teams were created. The creation of task teams – such as social media, research, mobilisation – has assisted because it’s given us a lot of content for the course, but also allowed us to channel our energies in a more constructive manner to show the public again that we can remain nonviolent and peaceful.

“These are the people who are going to lead us to the promised land of free education” #FeesMustFall #Wits pic.twitter.com/htMejsstph

â€œWe are going to consolidate a list of internal demands. Monday will not be a normal academic day. We continue in protest action. We also acknowledge there need to be national strategies and targets, so we’re working towards those now in the upcoming week and a half, where we will get input and streamlined communication with other institutions. We are trying to link struggles across the provinces, starting in Gauteng for now.

â€œThe demand remains free and quality education. We need to speed up the [Fees] commission because it seems it’s mainly a talk shop. And in terms of the timeline, that’s exactly what the student movement is pushing for. We want to know when we are implementing – we need to know, when will we pilot, and have a model, and we’re hoping it will be in the next year/two years.â€

The university sent an email on Friday afternoon saying that academic activities had been suspended until further notice.

On Friday, students marched to COSATU in a bid to mobilise workers to join their calls for free education.