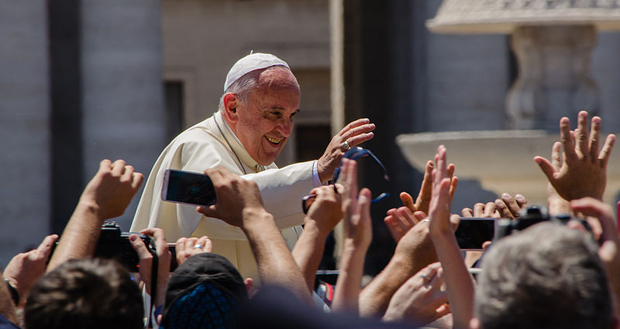 Pope Francis has been in office since 2011, after his predecessor Pope Benedict XVIâ€™s disastrous term ended when he unexpectedly resigned from papacy. During his short term in the Vatican, the pope has won the hearts of many â€“ even beyond his 1.2 billion Catholic following â€“ not to mention being awarded Time Magazineâ€™s person of the year in 2013. PONTSHO PILANE looks at five things that have made Francis a rock star.

1. He’s accepting of homosexuals
History has proved that when it comes to religion and homosexuality, religious people can be really bigoted. So when Francis said, â€œWho am I to judge a gay person of goodwill who seeks the Lord? You canâ€™t marginalise these people,â€ he left the world in shock. Francis has shown acceptance and love to members of the LGBTQI community and has called out Christians, saying that they donâ€™t have the right to condemn homosexual people. He also stated that love must be put before moral doctrines, and has accused the Church of being â€œobsessedâ€ with contraception, gay marriage and abortions. That said, it doesnâ€™t appear that any institutional reform is on theÂ agenda when it comes to the Catholic Church officially marrying homosexual couples.

2. He likes giving to the needy and is not all about the bling
Traditionally, when a new pope comes into office the staff at the Vatican gets a bonus.When Pope Benedict XVI was elected, the Vatican employees received a â‚¬500 (about R6,500 at current exchange rates)Â bonus. But upon his ascent to the papacy, FrancisÂ ordered staff to donate their bonuses to charity. Francis is also known for taking a more humble approach to his position by choosingÂ to live in a guesthouse instead of the papal apartments. In addition, he has chosen to wear plainer outfits than the popes that preceded him.

3. He encourages interfaith dialogue
Not only did he acknowledge and bless the end of Ramadan during his Angelus address last year, Francis has also urged Muslims and Christians to cultivate mutual respect for one another. In November 2014, the pope prayed in a mosque during his visit to Turkey, to show his commitment to improving relations between Christians and Muslims.

4. He used to be a bouncer at a night club
Yes. The adorable man who kisses and blesses babies used to be a bouncer. Before becoming a priest, the man who is now Pope Francis, was a bouncer in a bar in Buenos Aires. Once news spread about his colourful past, New York Magazine made up a scenario on the popeâ€™s stint as a bouncer and concluded that he wouldâ€™ve been the worldâ€™s worst bouncer. From the beginning of his term in the papacy, Francis made it clear that he intends toÂ connect with the youth. So, it was no surprise when, in August 2013, he took the worldâ€™s first Papal selfie. On a trip to the Philippines this January, Francis indulged again when he took a selfieÂ with two girls at the Villamor Air Base.