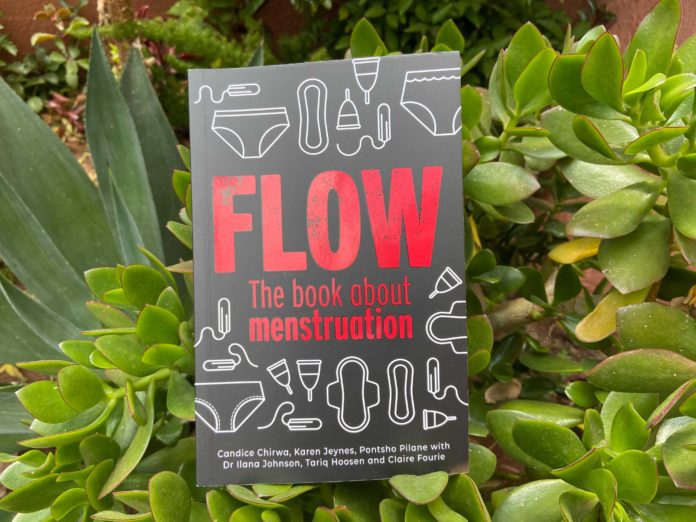 Flow: the book about menstruation is an informative and empowering book about menstruators. Written by Pontsho Pilane, Candice Chirwa and Karen Jeynes, it’s a book everyone should read. It also contains contributions from Dr Illana Johnson, Tariq Hoosen and Claire Fourie.

There are many books about menstruation out there. They deal with the intricacies and specificities around the experience of menstruating. However, within a South African and even African context, there are things menstruators experience which is world’s apart from those books. Flow manages to tick most of those boxes. The book goes into the general and much-needed biological information around menstruation. But the book also expands on the specific cultural stigmas and experiences.

What makes the book so important is that the three main writers are established and leading menstrual rights activists. From social media to articles and activism, they are well-known for their menstrual rights’ work. The reason why this has a bigger impact on the book is because the writers bring their work experiences into the book. It doesn’t read as academic text around menstruation. Instead along with the physical, psychological and political elements which are spoken about, the writers weave in their personal anecdotes and experiences.

Menstruation for the longest time has been viewed with shame and disgust by broader society and by menstruators themselves. While there have been campaigns around period positivity, it is difficult to change centuries of shame. For this reason, the book needs to be a must-read for everyone. The book focuses a great deal on school and the difficulties menstruators face in school. There is the fact that many school-going menstruators have to deal with a lack of access to menstrual products and a clean, sanitary environment to menstruate. But these difficulties do not go away even as menstruators grow older.

Even for menstruators in the workplace, there are many difficulties. There is still the shame and shaming that accompanies menstruation. That’s why this book should be mandatory for everyone. Creating a more period positive world requires menstruators to be unafraid to speak about their periods and what they are going through. More than that, it requires the people around them to understand what is happening to menstruators and how best to help.

“It’s Only Blood” Fights Stigma And Shame Around Menstruation

A particular thing that stood out to me from the book was the inclusion of commentary from a psychologist. Many myths around menstruation are being busted and there might be a slighter better awareness than there used to be. However, often the psychological element still continues to be ignored. Menstruation is not just a physical thing. It is psychological and political as well as physical which is why the writers focused on the three aspects.

The inclusion of the psychologist’s perspective was necessary. One comment in particular stood out: “the more we talk and the more we share, the more we empower ourselves and others.” Talking about menstruation and the experiences of menstruators is needed for the individual. But it’s also needed for other menstruators.

There are many anecdotes from people in the book speaking about their first experiences with menstruation. Some were positive but many were terrifying and negative. A lack of information and guidance tainted that first period. This is a reality of many young menstruators across the country. If this book was available for people of all ages, it would be an answer to the many questions menstruators and the people around them have.

Menstruating and periods are a normal biological function. But as with most things in society (which don’t happen to cisgendered men) there is an attempt to other it and make it seem unnatural. But that is not the case and should not be. Whether you hate your period, appreciate it or are past experiencing it, this book’s message is clear – talk about it. Creating period positivity and justice for all menstruators requires boldness and openness.

Afterall, the silence around periods and menstruators can literally be deadly for many. From menstruators not having access to proper products or being outcast due to their period, people can get ill or die.

Building a more equal and just world for all, especially menstruators, means making the personal political. This book will hopefully be the beginning of many other books, conversations and public forums that give menstruators the dignity and respect and most importantly the rights they deserve.

Flow is published by Kwela Publishers and is available at all good bookstores and online.