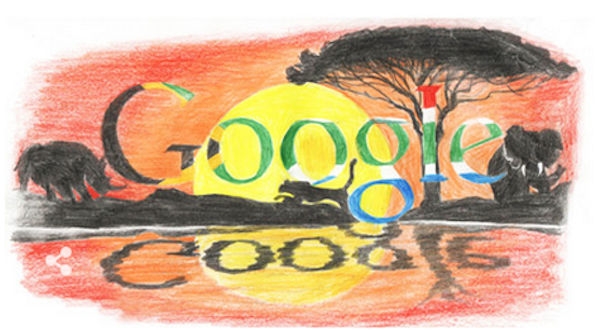 Google received thousands of entries from across the country for the Doodle competition, which was looking for entries from children centred on the theme â€œSouth Africa of Their Dreamsâ€.Â The winning entry, from grade 8 pupil Katya Ludick, is an acacia tree with a sunset in the background.

You may think this is a bit harsh but for context, it was back in May when a writer on Africa Is a Country pointed out the acacia tree meme, which usually features “an acacia tree, an orange sunset over the veld, or bothâ€.

â€œIn short, the covers of most novels â€˜about Africaâ€™ seem to have been designed by someone whose principal idea of the continent comes from The Lion King,â€ it said.

This is incredible. “The reason every book about Africa has the same cover” http://t.co/NIU67cVkPm pic.twitter.com/25Ibi5JbpS â€” Meredith Frost (@MeredithFrost) November 16, 2014

Images of the shockingly similar book covers, which were produced by a variety of publishing houses for various genres of writing, soon started doing the rounds online.

I’m not judging young Katya Ludick – her illustration is lovely, and she told TimesLive that her doodle was meant to depict her hopes for a country without poaching. “In my South African dream, there is no more poaching. We must fight for those that canâ€™t speak,â€ said the 14 year old.

(You can see more of the competition entries here.)

But it was, presumably, mainly adults who voted for the winning entry and I hope that at some point, South Africans young and old will move past these types of stereotypes, and start telling the world about our country in our own unique way.