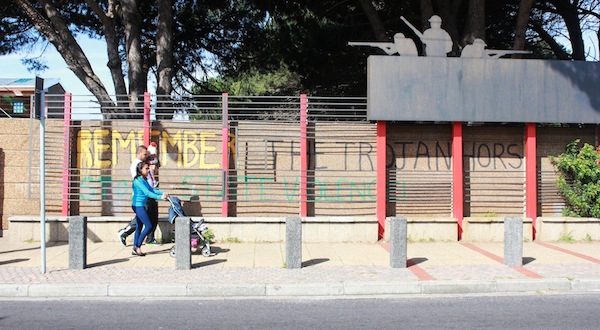 Heritage is an inheritance of the past. It impacts who we are, where we call home, and the traditions we follow. OnÂ 24 September, people across the country will fire up their braais in celebration of Heritage Day, but South Africa is still living with the effects of apartheid. RAâ€™EESA PATHER spoke with residents of District Six, the Bo Kaap, Woodstock,Â Athlone, and Groot Constantia about the stories that evoke the cityâ€™s diversity. I remember bringing my father the newspaper every night after he came home from work. He used to read the paper from front to back each night. One night, the 11 February 1966, the headline said: â€œDistrict Six declared a white areaâ€. That night he took the newspaper, he tore it up and told me to bring the bin.

Most of the people feel they are part of the soil in District Six. Our lives there started generations back, and I lived there for 26 years. We need to be there, that place belongs to us, and if that isnâ€™t heritage then I donâ€™t know what is.

Mr Mandela said â€œubuntuâ€, which is the spirit of helping, we say â€œkanallahâ€. Thatâ€™s a Malaysian word, but now some people shy away from these words and I donâ€™t know why. Itâ€™s what we grew up with. Aboubarker Brown, 72, pensioner, District Six
People still havenâ€™t moved back, and thatâ€™s because of politics and money. This in the CBD area, itâ€™s prime land. They already sold most of the land off behind our backs. Thatâ€™s our land that [the technikon], CPUT is on.

Every year on Heritage Day people used to write a message on a stone, and weâ€™d pile it up to make a monument. Last time we went there, there was a sign that said something like â€œfor CPUT residencesâ€.

Itâ€™s not right to impose on other peopleâ€™s feelings like that. They changed street names to erase the memory. If you look at District Six, about seven streets have been taken away. In the apartheid days already they were changing the names. The reason they change names is to confuse the youth, but they didnâ€™t know that we will always remember. They even changed the name District Six to Zonnebloem, but Zonnebloem was just a college. When we left they changed everything, so that people could forget, but I can close my eyes, walk up Kiezersgracht Street and tell you every street name. Petrus Wilson, 50, unemployed, Woodstock
Iâ€™ve been homeless since I was 13. I was busy during apartheid, throwing petrol bombs in the white areas. Iâ€™ve been in Woodstock for the last 17 years. First I stayed in Sea Point, then I got into gangsterism and all this stuff and it taught me a lesson. I went to jail, got out of jail and the whole system had been changed. It was the same year Mandela came out of jail, 1994.

Woodstock has changed for the better. Since these big businesses have started operating here, the police had to improve their visibility. So, the criminals were removed from their hideouts. Heritage is supposed to mean that we must remember those years of oppression. But now, the oppression has just been turned around and itâ€™s happening from the other end. We, as coloureds, are stuck in the middle all the time. So, heritage means nothing to me. Petrus Wilson, 50, unemployed, Woodstock
There are people moving in who have lots of spare cash, and now they want to just take over places. Thereâ€™s nothing I can say about the evictions. This woman [Sylvia Carlisle] was born in this house, she got married in this house, now who the hell do they think they are?Â  If they had a heart they would let her stay until she died.

I saw it happen in Cornwall Street. A whole block of flats was pulled down and people had to sleep outside on the street with their belongings. I donâ€™t have a home. Iâ€™ve got someone upstairs who looks after me everyday.Â I went through a hard school, thatâ€™s how I know about these things. Iâ€™ve seen what corruption does to people, Iâ€™ve seen what bribery can do. Itâ€™s more or less the same these days. Louie Petersen, 66, pensioner, Athlone
During apartheid I made bombs for the resistance. A friend of mine down the road here in Athlone got shot and killed. They were chasing me, but he was with me, so they shot and killed him. These houses were all my friendsâ€™, the cops couldnâ€™t enter this area. They couldnâ€™t take away our rights like that so I was fighting for it, not in a way that I would to kill them, but just to tell them to stay clear of us. Louie Petersen, 66, pensioner, Athlone
Nowadays, Athlone is quite cool, well at least this side of Klipfontein Road. There are gangsters, but youâ€™ll seldom hear that a foreigner to the area has been injured. Youâ€™ll get different gangs linked to different groups and there is that animosity of drug dealing. That is what the big problem is in Cape Town â€“ drugs.

Heritage has no real meaning today, because people have no respect. As coloured people, we are not remembered for what we did those years, and that disturbs me. Even today, there is an animosity among coloured people because we are competing with each other now, trying to make ourselves better than our neighbours. In those years, people would help each other. Fouziah Davids, 67, pensioner, Bo Kaap
I came from District Six and heritage means a lot because we were thrown out and we had to move. I married and moved here to Bo Kaap. We still have a community here, but now there are elements coming in and new generations moving here.

During apartheid, the riots were going on here. It was schoolchildren and they were all running down the streets. My children went to school here in Bo Kaap, and when they all started running, I would just look out the window trying to see whereâ€™s my children. They started rioting in Bo Kaap, and then they would go down into town. The police was after all of us. The kids were stoning and going on. Fouziah Davids, 67, pensioner, Bo Kaap
We were all Muslims here, until the next people started moving in. Itâ€™s so sad, we were the Malay Quarter. But now itâ€™s almost gone. The rent is high, and thatâ€™s why many people rent out their homes. They put two or three people in a room, and each one must pay. We are owners, so itâ€™s okay for us. Most of the people that come in are all students. They drink [alcohol], and we donâ€™t want any drinking in this community.

The community has changed since apartheid ended. I canâ€™t say itâ€™s changed for the worse, but there were things that were better in those days. Our culture was respected, we didnâ€™t have drug houses and crime. People have all got gates on now, but it wasnâ€™t like this before. When we first got here it was lovely. Everybody greeted everybody. The Coons started here, and people never complained or objected to it. Thatâ€™s the cultural heritage. But when other people moved in they said itâ€™s a noise. Nowadays itâ€™s not the same like it used to be. Sylvia Xasa, 52, shebeen worker, Langa
During apartheid I wasnâ€™t here in Cape Town, I was in the Eastern Cape. I came to Langa in 1995. I brewÂ umqombothi (traditional beer) to sell in traditional shebeens. I believe that heritage reminds me of my traditions and customs, where I come from and where I belong. We are all humans, but we have different cultures, so itâ€™s about my background and where I belong. I belong in Langa now, itâ€™s where Iâ€™m going to end my life journey. Sylvia Xasa, 52, shebeen worker, Langa
The housing development programme is one of the changes that I see because now people are getting houses. Social welfare means that we can now get grants for our children to go to school, so they have an educational opportunity to learn about the world.

There are things that are happening now that never happened when I was growing up during apartheid. Young people are using alcohol and drugs, theyâ€™re not going to school. Theyâ€™re not doing positive things for their future and that leads them to crime. Children knew what was the right thing do before. Now kids have rights and freedom to do whatever they want, and they abuse it.

Some of our black people have uplifted themselves so they can live in the suburbs. To my abilities, itâ€™s how I work for my children and my family. I would love to uplift myself to a better standard, but I am unprivileged in terms of education. Floricious Beukes, 43, Groot Constantia estate manager, Groot Constantia
Heritage is actually the history side of things. Itâ€™s the things I didnâ€™t earn, I just got it; itâ€™s for a free, itâ€™s a gift, particularly for those in the future, for our childrenâ€™s children. Thatâ€™s almost what this whole farm is about. Weâ€™re protecting it, but itâ€™s not ours, it belongs to the nation. Itâ€™s probably one of the oldest wine farms in the country.

Iâ€™ve been here for about four years. Itâ€™s fantastic to live here, itâ€™s a privilege. Itâ€™s a beautiful area, and this farm is making wine for more than 300 years without skipping one year. Youâ€™re close to the ocean, youâ€™ve got the mountain, youâ€™re 23km outside of Cape Town and youâ€™re on a farm. The first thing I think of when you mention Constantia is Simon van der Stel. But I also think of the families that were behind him, the ones that lived on the farm. Their families are still here, they carry the same name, and that means a lot to us.

Often when people say Constantia they just think of money and thatâ€™s wrong. Itâ€™s history that money canâ€™t buy. I am an Afrikaner, and Afrikaans is such a young language. I am in an English society and for me, I wish I could speak better English. I would probably bring up my children speaking English, because you need English here. But Afrikaans, in the house Iâ€™ll always speak it, my parents will always speak it. I donâ€™t want it to die out, itâ€™s one of those things you have to protect.

In my house we still feed people traditional poeitjie kos or braaivleis or the bobotie, thatâ€™s part of our traditions. I grew up like that, it canâ€™t be taken away. I donâ€™t think Afrikaner culture will be as strong in the future as it was in the past, but it would be good if it can last. I would like the Afrikaans culture to carry on.