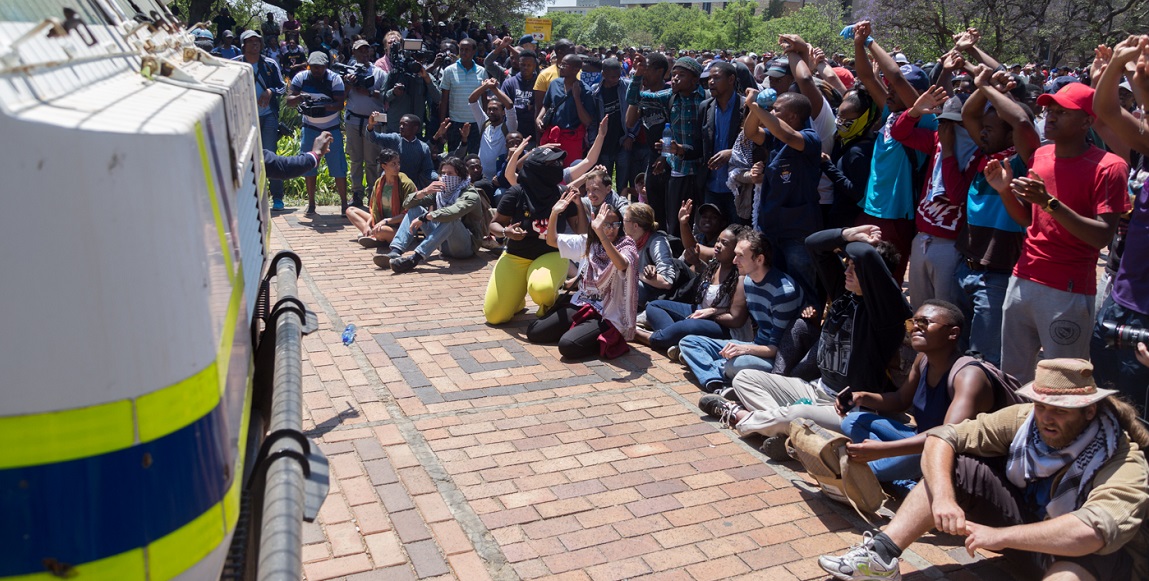 â€œNever regret thy fall, O Icarus of the fearless flight
For the greatest tragedy of them all Is never to feel the burning light.â€
â€“ Oscar Wilde

Itâ€™s been just over a year since the now infamous Shackville protest at the University of Cape Town. What started out as a public art-centred protest to highlight the then-imminent housing crisis quickly devolved into chaos most viscerally manifested through the burning of artworks from a nearby residence.

This aftermath was perhaps the lowest moment of public sympathy. A fire at a section of a library at the University of Kwazulu-Natal around this time was linked together fairly naturally in public discourse as evidence of the â€œlogical conclusionâ€ of the ideology of the movement.

As far as I can tell, the tactics of the â€œenemyâ€ have consisted of five major tactics.

In 2016, vice chancellors made use of legal instruments in particular to smash protest occupations within hours, effectively limiting the movementâ€™s ability to conduct mass meetings in the most convenient spaces without the risk of arrest and/or violent engagement with security or police forces. The student-worker movements so far, while differing in leadership, have generally resisted â€œstructured organisationalâ€ approaches. This has meant it has been very difficult calling meetings on a consistent basis without having a â€œbase of operationâ€. Where public space on campus is granted for the movement, concessions to the management team – for example the UCT â€œInstitutional Truth & Reconciliation Commissionâ€ – are traded.

The discourse emanating from the media contributes greatly to the criminalisation of protests more generally, as it constructs protesters as insurgent rioters devoid of motive, reason, or subjectivity. One is often notified of â€œprotestersâ€ through quiet campus announcements but rarely, if ever, informed alongside this about why in fact itâ€™s happening. The ongoing anti-militarisation efforts on campuses have been dealt serious blows by the now seemingly permanent media-fuelled word association of â€œ#FeesMustFallâ€ and â€œviolenceâ€. By consequence, it is proving harder and harder to argue against even the most draconian security upgrades. Several months ago I witnessed biometric fingerprint scanners on access gates at the University of Johannesburg and have little doubt that this â€œsolutionâ€ will be rolled out elsewhere if proven to be effective. This normalisation is perhaps one of the clearest open signals to shift rightwards towards privatisation as a response to the inequality that so many people have come together to find and describe as untenable.

Exploit divisions within the movement

From the onset, divisions along party political, race, class, and gender lines appeared to be housed in a broad church alliance under #FeesMustFall, using descriptors of â€œallyâ€ and â€œsolidarityâ€ as a means of connecting people across different positions; with the injunction of â€œdecolonisationâ€ as being described as being central to the principles of the movement. Differing views on priority and pathways forward have always remained hotly contested. However at the end of 2015 and start of 2016, the movement was unable to convert the critical mass into an alliance that had enough internal dynamism to drive forward its own agenda without provocation from the â€œenemyâ€.

With the flat structure approach and admittedly few checks and balances for accountability, divisions between personalities, political positions, and out of sheer hurt and distrust for then and existing leadership, the task for the authorities to play these groups off each other remains fairly simple. In fact at most campuses I have visited in the past six months, it is virtually impossible to hold an â€œopen dialogue spaceâ€ without it collapsing to these very issues.

The implementation of the curfew during the 2016 Wits protests and numerous residence raids by police at the University of the Western Cape are but two examples of the firm, concrete and violent ways in which the authorities have sought to clamp down on protest and dissent as a response to the uprisings. A closer look at the court interdicts will see a thread of an argument across spaces attempting to redefine â€œlegitimate protestâ€ as something that itself is not disruptive to the â€œnormal functioning of the universityâ€. Quite explicitly this is the criminalisation of protest for those who hold the view that protest by its nature is disruptive. The slow and steady roll back of this position by the authorities, who lean on apartheid legislation geared to mitigate the risk of popular insurrection, has steadily begun clouding the horizon of what movements consider possible under highly secured and paranoid environments.

Separate the â€œleadersâ€ from the mass base

Historically, the use of arrests and political detention have served the dual purpose of discouraging dissent and separating the leaders from the constituency. This can create enough of a vacuum in a political conflict for the authorities to cut and thrust forward. This leaves the opponents forced into settlement agreements as bargaining chips to the release of key figures. The deification of popular leaders during arrests has also visibly caused tensions within the movement, as one would expect some personalities are likely to receive more support, assistance and attention than others – this running in direct conflict with the rhetorical aim of the movement of a non-hierarchical society. The pressures and threats of the tactics from the authorities have forced the movement to become increasingly top-heavy without it having taken its opportunities to develop.

As we now enter the third year of a reasonably distinct era of student-worker protests, it is becoming increasingly difficult to bite back against the setting cynicism and nihilism within ourselves and those who hope to work with us, as the horizon of the objective seems further and further away and our waxed wings ever worse for wear. I would wager that a push for a â€œback to basicsâ€ approach with greater focus on local organising may be what is needed at this phase of the movement despite louder and louder calls for â€œnational leadershipâ€.

Over time Iâ€™ve heard many a time from older sympathiser – â€œFall, fall, fall … you always want things to fall, now what must rise?â€ â€“ and while at least for this moment I resist the urge to protest this sentiment, I canâ€™t help but be reminded of unfortunately yet utterly predictable fate of Icarus. Unable to sustain himself in flight with wings of wax in the harsh heat of the sun, he found himself hurtling to the ground.

For many in our movement, this fall has already in some sense been fatal, its effect damaging and permanent. However while our wings continue to melt, and for some be clipped, we must begin to remember how to push ever forward against the grain of oppression. For that is surely what â€œA luta continuaâ€ has always truly meant.