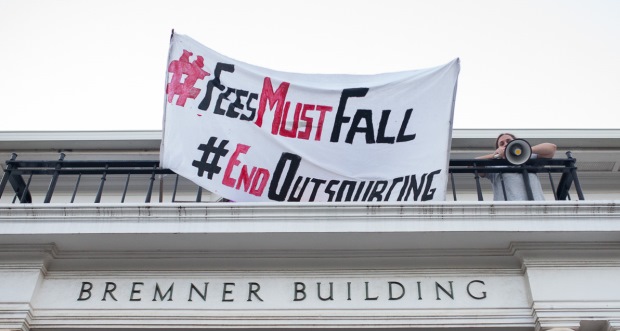 Workers won a major victory during the course of the #FeesMustFall protests, with UCT agreeing to insourcing in principle but there has also been growing discontent with the representation offered by their union, Nehawu. AMANDA XULU explains.

Although UCT signed an agreement with Nehawu on 28 October to agree, in principal, to end outsourcing on campus, union members claim the UCT branch of Nehawu did not enter negotiations with the workersâ€™ real interests in mind. Instead, they say the union has been working in tandem with the university.

The agreement states that five of the six companies UCT currently outsources to – namely, Metro, Supercare, G4S, C3, Turfworks and Sibanye – will be subject to insourcing, once their contracts have run through. However, many workers rejected the agreement and a mass meeting planned for 3 November was cancelled after workers accused the union of trying to â€œtake the credit for the victory achieved by students and workersâ€.

Many workers have praised the efforts of UCTâ€™s students in assisting to make insourcing a reality.

â€œThe students played a very important role in taking our demands seriously,â€ said a worker for Supercare, another of the companies to be insourced. â€œWithout their support, and their refusal to agree the universityâ€™s demands, we would still be outsourced and paid peanuts.â€

Workers say Nehawu is not representing their immediate and long-term interests.

A worker for Turfworks, one of the six companies to be insourced by UCT upon the end of their contract, said,

â€œThese unions are not interested in making my life better, but are just working with UCT and lying to us. Where were they when the students stood up with us?â€

A worker with G4S, who asked not to be named, complained that Nehawu was â€œknown for not being clear with its workersâ€.

â€œThere is never a straight answer with them, as they say that all matters are under consideration. How are we as workers then meant to know if things change if they wonâ€™t communicate?â€ he asked.

There is a growing division between those workers who believe they should look to achieve insourcing on their own terms and those who still believe that NEHAWU is the most practical agent for negotiations with the university. This has delayed any mass worker meetings that could have advanced discussions on concerns like medical aid and pension funds.

Two mass meetings were cancelled in early November as workers and the union were not seeing eye to eye.
Nehawu however maintains that it has always been at the forefront of the fight for insourcing at UCT.
Branch secretary of Nehawu UCT Smartdryck Abrahams said the union has been fighting on the workersâ€™ side since 1985 and that outsourcing has been part of their mandate for the last 10 years.

â€œWe are on the same side as the workers, and want only to represent their best interests. However, we canâ€™t do that when the workers wonâ€™t hear us out when we call meetings. This can only work if we work together, in order to make UCT realise that we are serious about bringing real change,â€ he said.

He denied that the terms of the agreement had not been transparent.

Abrahams further argued that the terms mentioned to in the agreement with UCT are terms that the workers have already been made aware of, and were not discussed without their consent.

At present, UCT has not made any attempts to engage with workers directly, but has chosen to negotiate through NEHAWU.

â€œAll that UCT and NEHAWU have done is to not explain the most important things: a minimum wage and job security when insourcing happens. They keep saying that these will be discussed soon, but we are tired of waiting,â€ said another Supercare worker.

Meanwhile, parliamentary workers associated with Nehawu this week downed tools to protest for better pay and working conditions.Â But asÂ the struggles of workers at UCTÂ have already shown, simply securing a commitment from the people who hold the purse strings means little in the short run.