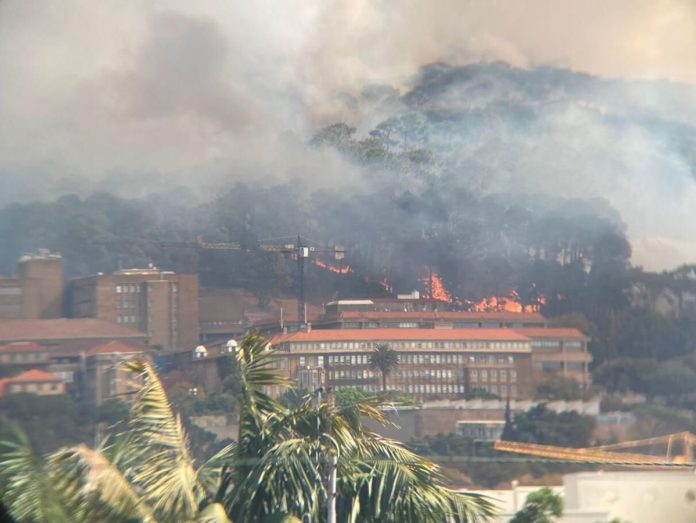 The Cape Town wildfires have displaced thousands of residents, many of whom are students at the University of Cape Town (UCT). On Tuesday morning, the university announced a suspension of the academic programme until April 23.

The Daily Vox team spoke to two students who were evacuated on Sunday.

*Nandi is a fourth-year BsocSci student at UCT who lives at Forest Hill residence.

As the fire progressed yesterday our sub-wardens told us to leave the residence. As per fire drill protocols we took our identity documents and phones to the quad. For a while we were all stranded. The smoke was getting too thick so we went to the main road. Campus Protection Services asked us to go back to the quad as it wasn’t safe. At that point there was no formal communication. It was just hearsay from students. The EFFSC (Economic Freedom Front Student Command) and other SRC members came to Forest Hill to tell us to go to the Mobray bus terminus. We were divided into groups and taken to Hiddingh campus and Graduate School of Business (GSB). I went to Hiddingh. The UCT SRC Treasurer-general Oratile Thothela asked us if we had been addressed by UCT Management yet; we were not.

We got divided up per residence again to go to hotels. There were various student leaders organising things for us. We were waiting and hungry. Donors came to Hiddingh with toiletry packs, and we got food as well. I left at 11pm when I was allocated to a hotel. I think what made us anxious was a lack of communication and lots of hearsay going around. It caused lots of confusion. The SRC really pulled through to check up on us. The Garden Court hotel had a bit of a problem with no place for students, but we were helped. The VC came to say that they got hotels for us after long meetings, and left after. I have been helping at the GSB all day, helping with toiletry packs. The SRC is working to get food to those hotels not offering meals to students. I am anxious in general and this has induced it. The SRC mobilised the Jammie shuttle drivers to transport us, and other staff working overtime to assist. Today the VC thanked her executive team, and it was surprising because none of them were on the ground with us. By the time they actually arrived we were already fed and had an idea of our accommodation. The smartest thing to do is to halt academic work, and let us go on an early vacation. We are grateful for having a place to sleep, but emotional support did not come from management. So to wake up and see them taking credit for the actual support we got from the SRC is very wrong.

Read more: Cape Town wildfires: Here’s how you can help

*Kagiso is from Limpopo and a first-year Bcom Financial Accounting student and a resident of Smuts Hall residence.

It was really hectic. The fire started in the morning at Rhodes Memorial, we actually went up there to check it out. The firefighters asked us to leave. At the time we thought it was under control. I was taking a shower when I felt the thick smoke getting into the res. Fire alarms went off and I got dressed quickly. I could feel flames outside of my window.I really didn’t have time to pack up much.

I managed to leave with my laptop and a few clothing items. We couldn’t see anything clearly and just ran down to the main road. I am staying at the Southern Sun Hotel, Waterfront. UCT is doing their best. We have had fire drills before, but I don’t think this kind of external fire was ever anticipated. Lower campus was better prepared, and students had more time to pack up. I heard about all the important texts and books lost at the African Studies Library. But I see no one is really talking about the other buildings. We really need clothes and toiletries for right now- but I am safe.

*Students preferred to speak to us anonymously