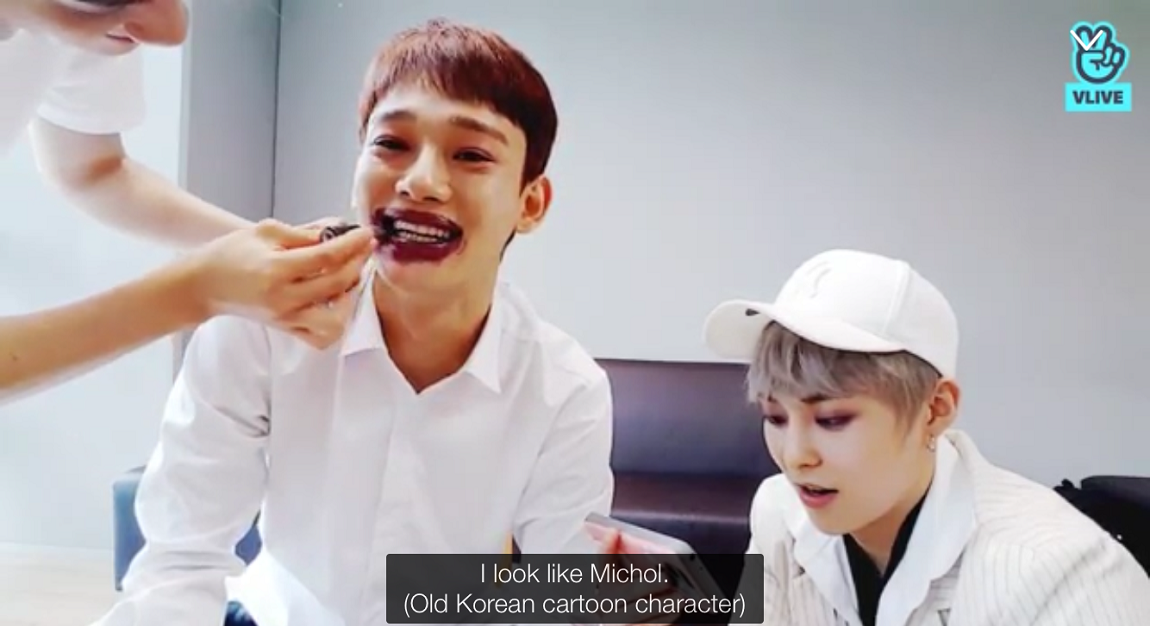 It’s not easy being a fan when the idols you adore display blatantly offensive behaviour. As fans, we have a responsibility to call out harmful behaviour. The K-pop industry has changed perceptions around the world with their music and portrayals of masculinity. But as international fans gravitate towards an appreciation and understanding of Korean culture, the same cannot be said of K-pop idols cultural sensitivities. SHAAZIA EBRAHIM and FATIMA MOOSA discuss the problematic side of the industry – and K-pop idols’ affinity to blackface.

Recently EXO-CBX members Chen, Baekhyun, and Xiumin held a live stream on streaming app V Live to celebrate their mini-comeback. The members played Jenga and it all seemed very cute and fun until it wasn’t. As retribution for losing the members could apply make-up to the loser and it soon veered into the territory of blackface. Baekhyun applied lipstick to Chen’s face, making his lips extra huge. Chen then remarked that he looked like a cartoon character, Michol, which has been criticised of exuding blackface.

Michol is a cartoon character in the popular South Korean cartoon, Dooly. Michol plays a singer whose character has been inspired by Michael Jackson. Many idols and other Korean celebrities have done parodies of Michol on popular television shows and everytime they are called out, the responses have been so cringe.

I feel like people don’t understand why black exo stans are upset. So let me break it down. He basically compared his lips to a korean cartoon character that is based on blackface.

So why didnt you call out namjoonn when he said jk can be like michol when jk didnt put sunscreen??@ksjnovia pic.twitter.com/mduGO28R1Z

Instead of realising that the character in itself is so ill-conceived, the apologies have seemed to indicate that it in fact it’s international fans who have misunderstood the characterisation. However, the problem is not just that there is a divide between understanding Korean popular culture from an outside perspective. Culture cannot be regarded as sacrosanct if it’s proven to be offensive and discriminatory.

michol IS NOT just a character and this isnâ€™t a fandom issue, chen deliberately mocked an entire race by saying he looked like michol, a RACIST SYMBOL in korea that SO many people use to mock black people, even doing black face on variety shows/tv saying theyâ€™re imitaiting michol pic.twitter.com/SJqLBtHUYC

Later in the video Chen remarked that his lips looked too plump, according to the English subtitles in the video, causing the other members to burst into laughter. However, for Korean viewers, he actually said “Isn’t this Kunta Kinte?” Kunta Kinte is the main character of the show Roots – a man from the African continent who is taken to America and sold into slavery. Invoking Kunta Kinte’s name in jest is disregarding the significance of Kinte in telling the story of people from the African continent who were sold into slavery. Many fans have called for Chen to apologise for his actions but there has been no response from the idol or his management as yet.

Last year the K-pop group Mamamoo featured in blackface in their concert video. The quartet ran a parody video of themselves performing Bruno Mars and Mark Ronson’s Uptown Funk wearing the same outfits featured in the original video, and some dark face paint – which was distasteful to say the least. Their actions caused outrage among the group’s international fanbases who castigated them on social media platforms like Tumblr and Twitter.

The group apologised on Facebook and said there was “no excuse” for their insensitivity. The apology read: “We were extremely ignorant of blackface and did not understand the implications of our actions. We will be taking time to understand more about our international fans to ensure this never happens again. We hope that you will help to educate us on these and other issues so that we can become better people and better artists.”

i have never been so betrayed as i was by mamamoo doing blackface. i havent listened to their music since but they were my favourite girl group at the time

i remember i was a whole mamamoo stan until they did blackface…twice. they had so much potential but i guess they couldnt resist the trend of being racist

G-Dragon, of one of the biggest K-pop groups Big Bang, has a long history of offensive behaviour. In one of his worst moments – although they all have been pretty horrendous – posted a horrific photo on Instagram in 2012 in apparent tribute to Trayvon Martin, an unarmed black teen who was gunned down by a neighborhood watchdog that year. But he’s wearing blackface paint in the photo. G-Dragon’s representative told Spin that the photo was a “huge misunderstanding.” But G-Dragon has worn blackface before posing as Andre 3000 in a “tribute” video a few years before.

While Korean society and its relative homogeneity needs to be taken into account, that is no excuse for the behavior of some K-pop idols. Most K-pop idols have become famous globally and travel around the world to meet all their fans. They are exposed to different cultures and people. They have a responsibility to their international fans to sensitise themselves to the different cultures out there. While some practices might be part of Korean culture and aren’t regarded as problematic in Korea, we need to realise that the world is changing. This insensitivity and ignorance could result in the alienation of a number of fans.

As fans, it’s not our duty to educate idols. Sure we can call out their problematic behaviour, but idols and their record labels have a responsibility to their vast fan bases to check themselves and their behavior. We live in a technological age where there is a wealth of information freely available regarding racism, bias, and cultural sensitivity. Idols and their labels need to read up, speak to people or undergo sensitivity training if that’s necessary. If the Korean entertainment industry wants to open up the world to Korean society and spread the Hallyu wave to the rest of the world, then the industry needs to be aware the outside world and account for their actions. It is time for these idols to do better and to be better.

Check out the rest of The Daily Vox’s K-pop coverage:
11 Reasons You Should Stan BTS
Redefining masculinity the BTS way
Hixtape is the lituation we never deserved
6 K-pop groups that are a must listen
Here’s Why BTS Has Such A Strong ARMY In SA
EXO Inspires South African EXO-Ls To Give Back
All The Words You Need To Know To Join A K-Pop Fandom

Editor’s Note: Previously it was mentioned that Xiumin applied the make-up. It was actually Baekhyun.