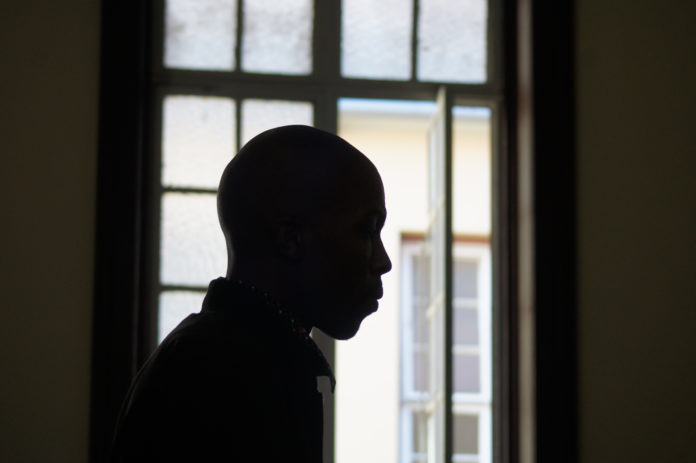 The fight for Kanya Cekeshe’s release is not over. On October 14, the Johannesburg Magistrate’s Court denied bail and leave to appeal his conviction. It was a sombre and tearful court that received the news.

UPDATE: News24 reported on Sunday that Cekeshe has been admitted to hospital. His legal team said he was suffering from ill-health relating to his mental health.

Speaking to the media outside the court, Cekeshe’s legal team, Advocate Tembeka Ngcukaitobi said: “We think that the magistrate was wrong and we think that High Court will likely found in our favour.” Just after the judge denied the applications in court, Ngcukaitobi stood up in court announcing his decision to take the application to the High Court. He asked the judge to release the court documents with his decision so that preparations may start for the High Court application.

Cekeshe is currently serving an eight year sentence with three years suspended. He was charged with public violence and arson related to the 2016 Fees Must Fall (FMF) protests. During the protests, Cekeshe was reportedly caught on camera bending down next to a police car trying to light a match.

During bail and leave to appeal application, Ngcukaitobi said Cekeshe has an unfair trial because his previous legal team did not give him the correct advice. Carstens said: “The applicant is not an immature or unsophisticated or uneducated man. To the contrary, after matriculating he started studying law but subsequently changed to media studies. He had more than enough time during the trial and application for leave to appeal against sentencing to raise any objection to the manner in which his trial was conducted if he had any. The fact that he briefed the same advocate to apply for leave to appeal against sentence indicates he had trust in his competency.”

The state opposed bail and leave to appeal applications because of a possible prejudice that might arise against the National Prosecuting Authority (NPA). The judge echoed this during his judgement. Ngcukaitobi pointed out that the only person being prejudiced against is Cekeshe who will remain in prison.

As Cekeshe’s family and supporters filed out of the court, disheartened by the decision, some of those gathered outside called for a protest against their decision.

Mandla Shikwambane, president of the Economic Freedom Fighters Student Command (EFFSC) told the gathered crowds: “The government of South Africa does not care about young people in this country. [They don’t] care about students of this country.”

Shikwambane said they had no options but to take to the streets, and demand the release of Cekeshe.

Ngcukaitobi said he was not in favour of protests against the decision. “The judicial process still works,” said Ngcukaitobi. He added that he and Wikus Steyl, Cekeshe’s other legal representative would immediately begin with their work on the High Court application.

“We remain optimistic that the High Court will look at the matter differently. Those present in court last week saw the arguments against us were very far-signed. That position has not changed. Keep up the spirits,” said Ngcukaitobi.

A visibly emotional Mnikelo Madala, Cekeshe’s uncle also came out to address media and the crowds on behalf of the family. The effect of the decision was clear on his face. Madala said it was a huge blow but the family will fight on to get Cekeshe released.

Addressing the crowd, Madala said: “There is not a lot to say. Safe to say we’ve taken a body blow but we fight on.”

Monday’s court proceedings were once more delayed when the judge announced that he could not find the condonation paperwork. This is “a defence argument sometimes made when an accuser has previously forgiven or chosen to ignore an act about which they are now legally complaining.” The judge postponed his decision until the afternoon in order to look through the papers. He granted the condonation while denying the rest of the applications.

After the judgement, justice minister Ronald Lamola tweeted: “We note the dismissal of both the leave to appeal and bail for fees must fall activists Khaya Cekeshe by the Johannesburg Magistrate Court. We’re in the process of urgently assisting him with an application for presidential pardon or other legally available avenues.”

Earlier this year, addressing parliament Lamola said the department would not be able to help Fees Must Fall students with a blanket pardon.

“Since the offer was made to date, the department of justice and constitutional development has not received such a list from the student leaders,” said Lamola adding that they have also not received any applications for expungement.