Home As Told to This man polices the streets by day and writes isiZulu novels by...
WhatsApp
Facebook
Twitter
Email
Print 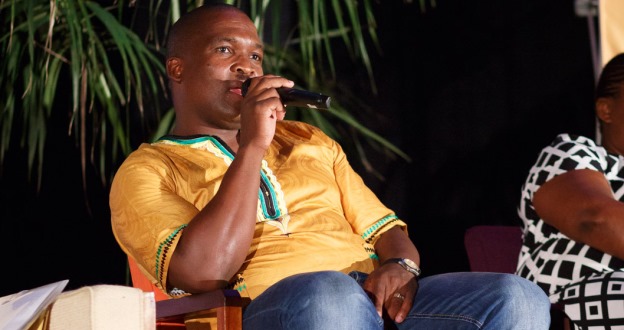 We all know writing doesn’t pay the bills. Unless of course you’re JK Rowling or John Grisham. And what if you’re writing novels in isiZulu? Author of six IsiZulu novels, MANDLA NDLOVU, says its impossible to be a full time writer in South Africa. He works as a police officer by day to make ends meet. He told MBALI ZWANE his story.

My mother was a domestic worker and had to raise three children with the little money she earned.

We had very little to get by with so I had to make sure that I passed my matric and help my mother out. I received a bursary after completing my matric and enrolled for a diploma in paralegal studies.

In high school, my teachers would always choose me to be the one that reads in class.

Thatâ€™s how I fell in love with books. I began writing radio dramas and soon after that, I was advised to start writing novels. Never in my life did I think I could do it. Iâ€™ve published six books since 2002.

My first book was about a young woman who had recently graduated and looking for employment. A director of a company accepts a sexual bribe from the woman in return for a position at the company. Unfortunately, she falls pregnant by this man who is married. The wife finds out and throws the woman out of a window on the sixth floor to make it look like she committed suicide. Itâ€™s based on a true story and because I was writing fiction, Iâ€™ve had to add events of my own. Iâ€™m often asked how I manage to be a policeman and a writer because both of these jobs are demanding and stressful. Iâ€™ve learnt to balance it but it is not easy. I would love to be a fulltime writer and write more novels because thereâ€™s a need for new reading books in IsiZulu for children and scholars. I also enjoy being a policeman because that exposes me to real-life events that I turn into fiction in my books.

Writing my novels in IsiZulu is an attempt to preserve my language, and giving back to the IsiZulu community and literature. Plus it cuts my costs because I donâ€™t need to take it to a language expert to proofread it before sending it to publishers. ‘The IsiZulu authors I used to read when I was growing up are old,â€™ I thought to myself, â€˜If these people die, who will continue writing in IsiZulu? What are our children going to read?â€™ That has been my motivation to keep writing books. The last book I wrote took me a month to finish, can you imagine how many more books Iâ€™d write if all I did was write?

There are several reasons why not all writers are able to live off writing alone.

The cost of production is one, and for me, my target market doesnâ€™t really buy books, they rely on books received at school or at the library.

Thatâ€™s one of the reasons I have had to get into an agreement with the education department in KZN, which will expose my books a lot more. Thereâ€™s no doubt that writing in English expands your readership vastly.

I wouldnâ€™t mind if my novels were to be translated into other languages. Iâ€™ve been approached by one of my publishers to translate the book into French.

The important thing, is that the work and theme of my novels donâ€™t get lost in translation. Translation will enable everyone to read my work, thus increasing the readership and hopefully thatâ€™ll mean more money in my pocket.