Home Features Mbuyiseni Ndlozi says the EFF is the only party in SA with...
WhatsApp
Facebook
Twitter
Email
Print 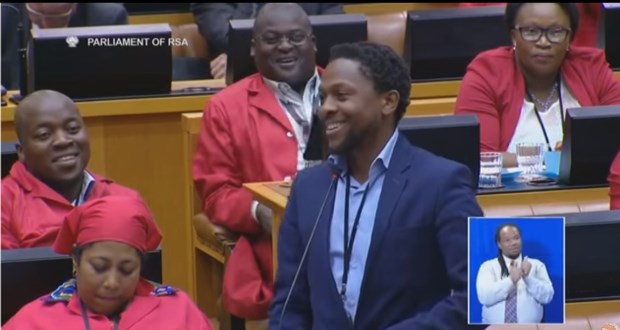 While party officials await the results of Wednesdayâ€™s local government elections, the Economic Freedom Fightersâ€™ spokesperson says his party is calm and content.

â€œThe description of our emotional state is that we are in tranquillity and internal peace,â€ he said to The Daily Vox at the IECâ€™s Results Operations Centre in Pretoria.

Analysts say this, the first local government election which the EFF is contesting, will be the true test of the partyâ€™s support throughout the country.

â€œItâ€™s in the hands of South Africans,â€ Ndlozi said. â€œThereâ€™s nothing to be nervous about because all the pressure has been on us throughout the campaign.â€

I just voted for the EFF. I feel all sorts of emotions. Had no idea a cross could carry melancholy and deep joy. #VoteEFF

He said the party had been put under tremendous pressure in the months ahead of the election, and were tested at â€œbeing able to roll out every strategyâ€. He however feels that the party has successfully done that â€œwith flying coloursâ€.

Political analyst Ebrahim Fakir said that while the ANCâ€™s results will be scrutinised, this election is also important for the EFF, not least to understand how its lower structures operate in the environs of local government.

Ndlozi admits that the preparations for this election tested the partyâ€™s organising abilities.

â€œIt was a serious test of our internal democracy and structures,â€ he said. â€œWe had to go through those structures, elect thousands and thousands of councillors. We managed to do that without any drop of blood.â€

And heâ€™s confident that the EFF will do well.

â€œWe believe we are going to do well precisely because we are that exposed to the local issues, individual communities and wards in South Africa,â€ he said.

Fakir says that while the ANCâ€™s core support base may have soured towards the party, many supporters are still searching for a viable alternative.

Ndlozi however feels the ANC is unable to motivate trust among young South Africans.

â€œThe DA and ANC are asking us to invest in stupidity,â€ he said. Â â€œWe are confident and we trust in the intellect of our people that they will make the right decision,â€ Ndlozi said.