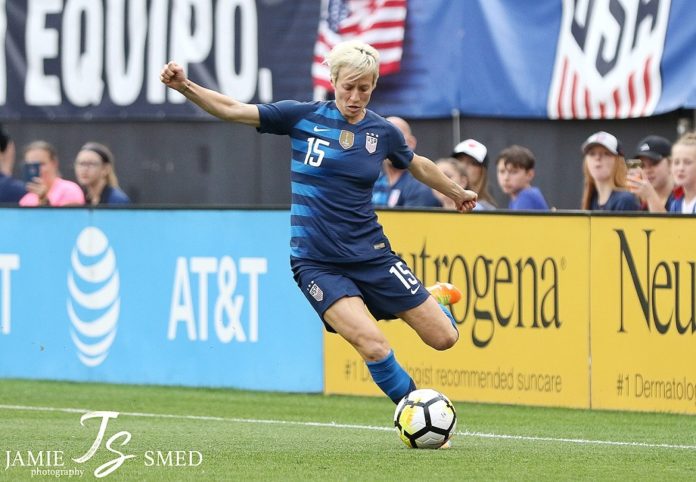 A record number of spectators watched the Fifa Women’s World Cup, an entertaining spectacle that will only grow the game. Despite this, the fight for respect is not over for women, writes LUNGANI ZAMA.

It had to be the brilliant American team that lifted their fourth Fifa Women’s World Cup on Sunday, putting the finishing touches to a brilliant celebration of athleticism and skill in France.

Make no mistake, the 2019 edition was the best watched in the history of the event for a number of reasons, the biggest of those being the sheer quality of football on display. America have won four of the eight tournaments ever played and their dominance of the sport has allowed them to transcend into other, bigger conversations.

They are the custodians of equality and the more brilliantly their light on the field shines, so too does the light they cast on bigger social issues. Their celebrations and their impact is too loud to be ignored, as the audience for women’s football swells by the day.

The heavyweight semifinal between England and the United States was the most watched broadcast on British television in 2019. Being shown on a free-to-air British Broadcasting Corporation channel, the tournament left the ICC Cricket World Cup in the viewership dust, as the pay-TV numbers simply cannot compete.

And thus, a massive chunk of the nation groaned when Alex Morgan scored America’s second goal and celebrating by sipping from an imaginary cup of tea.

The cheek of it!

English fury was then hurled at Morgan for going down too easily just before halftime, after a challenge from England’s Millie Bright.

“That was soft,” came the general consensus from Manchester drinking hole The Footage patrons.

Fighting for respect and equality

The venue is located on Oxford Road, which remains one of the world’s busiest bus routes. When Manchester’s vast student population is in residence, places such as The Footage are, to borrow local parlance, absolutely heaving.

“Normally, for a big game, there is barely room to stand. We should get a few in for Tuesday,” Charis the bartender had said cautiously in the build-up.

Nearly 12 million Britons tuned in for the clash of cultures on 2 July, though even that figure is significantly below the real number, as it takes only households into account.

At The Footage, there wasn’t a stray seat, as fans arrived promptly before 8pm. Some arrived in replica jerseys, and all with stout optimism and good cheer.

Millions more would have watched in pubs across the country, fully behind Phil Neville’s team of Lionesses. They roared into life in the quarterfinals, overwhelming Norway 3-0.

That Norway, however, was hamstrung by the withdrawal of their standout player, Ada Hegerberg, who is at odds with her football association. The four-time Uefa Champions League winner, and the inaugural recipient of the female Ballon d’Or award in 2018, has cited a lack of respect for women’s football.

Given her status as the world’s best player, Norwegian football addressed a range of concerns that were brought to light by Hegerberg’s stance. The director of football for men and women in the country is Lise Klaveness, and the national women’s team remuneration has been doubled.

It is not a situation unique to Norway, however. The American team stood as one to file a gender discrimination case against US Soccer, with the disparity from their infinitely less successful male colleagues a major point.

It is a folly that the multiple World Cup winners suckle on the hind teat of American sport, even as their brilliance is used as one of the biggest billboards of hope for the American dream.

It is still fighting for equality, on and off the field, and it is against that backdrop that the 2019 Women’s World Cup has been a watershed. The target of a billion viewers has been smashed and heroines have emerged from several countries. The Guardian newspaper listed Khadija Shaw as their 2018 Footballer of the Year.

Ahead of any other footballer, in the year of the men’s World Cup and an extraordinary Champions League narrative, the British newspaper found Shaw’s rise to be the most compelling.

She fired Jamaica to their first ever Women’s World Cup, and did so in the midst of incredible tragedy, as she lost four of her seven brothers to gang-related violence. It was a harrowing personal period, interspersed with the greatest leap for Jamaican women’s football.

The Reggae Girlz, as they call themselves. “Wi likkle but wi Tallawah,” captain Konya Plummer said of the Jamaican spirit.

That phrase loosely translates to, we may be a small nation, but we are fearless and strong-willed, and will not be contained by pre-conceived boundaries.

It might as easily be a slogan for the Women’s World Cup, which is a meeting point for so many teams trying to shatter boundaries that have contained their dreams for a long time.

The cream of the crop rose to the quarterfinals, and then the genuine contenders found another gear. It is no coincidence that the semifinalists in the 2019 edition are comprised of countries who take women’s football a lot more seriously than others.

In England, for example, this World Cup has been on the back pages and front of the newspapers. The Lionesses were splashed everywhere, their progress gathering momentum and more support with each passing round. They responded accordingly, daring a nation to dream that they might go to places men’s football hasn’t visited since 1966.

Against a brilliantly efficient American team, England fell short. There was personal agony, too, as the dreaded penalty curse showed that it runs through all of English football. Defender Steph Houghton had the chance to draw England level, deep into the second half, from the penalty spot. Somehow, England had grown stronger as the game dragged on and America battened down the hatches. From 12 yards, Houghton had the chance to ask even more questions of the American character.

Having drilled previous penalties in with gusto, she was the obvious choice. A nation held its breath, and sighed as she struck it with an unusual uncertainty, and cruelly added her name to a long list of English heartbreakers from the spot.

It wasn’t to be, but the ride to the semifinals was incredible.

Their matches were shown live at Glastonbury, of all places, with one of the biggest annual parties in the world keeping in tune with the times. They were just one of many, compelling narratives in France, however.

‘I ain’t going to the fucking White House’

Hegerberg not being at the World Cup is a big loss for the spectacle, but she maintains that her sacrifice now will result in a better future for those who come behind her. It was the champions, of course, who made the biggest headlines. On and off the field.

Megan Rapinoe deservedly won the Golden Boot, which goes to the best player of the tournament, for her drive and excellence over the past month. She has been Captain America, her rainbow of hair colours acting like a beacon for the rest of the side to follow.

Rapinoe also made headlines away from the field. When asked if this brilliant team would take their World Cup to the White House, she didn’t shirk the challenge of the question.

“I ain’t going to the fucking White House,” she sniped.

Naturally, US President Donald Trump took the bait and responded with a flurry of tweets. He challenged Rapinoe to “finish the job” first. Which she and the rest of this outstanding team did.

Rapinoe is no stranger to the art of standing out. She routinely uses her raised platform to shine a light on bigger issues.

In 2011, after a big performance at that year’s World Cup, she came out as being gay. Rapinoe being Rapinoe, she chose to do so in a way that left no questions to be asked. She and her partner posed on the cover of ESPN The Magazine’s Body Issue, naked and unafraid.

While others wondered what impact that might have on her career, she didn’t flinch. She has always seen it as a responsibility to stand up for the causes and people in which she believes. And when she cannot stand, she kneels. Rapinoe was one of the first athletes to take a knee in solidarity with American football player Colin Kaepernick and his fight against police brutality.

“I haven’t experienced over-policing, racial profiling, police brutality or the sight of a family member’s body lying dead in the street. But I cannot stand idly by while there are people in this country who have had to deal with that kind of heartache,” she wrote in The Players Tribune, by way of explanation.

As a team, the American women’s footballers are locked in another battle, away from the bright lights of World Cup fever. In 2016, Rapinoe’s was one of five names that went on the initial lawsuit against US Soccer for wage discrimination.

That fight is still ongoing and talks will continue once the World Cup dust settles. Rapinoe says they will fight and fight to the end. Their courage has already inspired other nations to take similar stances. Australia’s national women’s team, the Matildas, went on strike. Norwegian football has made huge strides, and the collective stance on women’s football and its reward and relevance is changing.

Rapinoe and her teammates have been unwavering on this front – and for good reason. Four times they have won the World Cup. Countless times they have been held up as a beaming example by their bosses and sponsors. It’s about time their achievements reflected where it matters most.

Bringing a fresh World Cup victory to the negotiating table is one heck of a bargaining chip. It’s the elephant in the room for American soccer. These women are the flagship, the standard bearers whose relentless pursuit for more is making a mockery of the pay disparity.

And there, in the midst of it all, is Rapinoe. Her goal celebrations are a symbol of the attitude of this Stars and Stripes unit. Arms wide open, head tilted slightly to the side and a grin that has the certainty of fact that this is their time.

She stands on the ramparts of women’s football, flying the flag for the entire code. She and this bold generation of footballers will no longer be silenced, their quest for equality no longer swept aside.

At the press conference after the World Cup final, Rapinoe called out Fifa for scheduling the Copa América and the Concacaf Gold Cup finals on the same day as the Women’s World Cup final.

It’s that lack of respect that Hegerberg has touched on. That apparent lack of care for this day of days on the calendar. The prize money for this 2019 Women’s World Cup was $30 million.

Is the men’s offering 10 times the product of women’s football?

Fifa president Gianni Infantino spoke of plans to double the money for the next Women’s World Cup after this year’s edition, and of expanding the tournament. Rapinoe will probably tell you that talk is cheap and she will only believe it when she sees it.

Who can blame her, as a decorated footballing legend who has to take her bosses to court for a pay rise to reflect her team’s true standing?

Lungani Zama is an international freelance sport and travel journalist, and a regular contributor to New Frame.

This article was first published by New Frame.