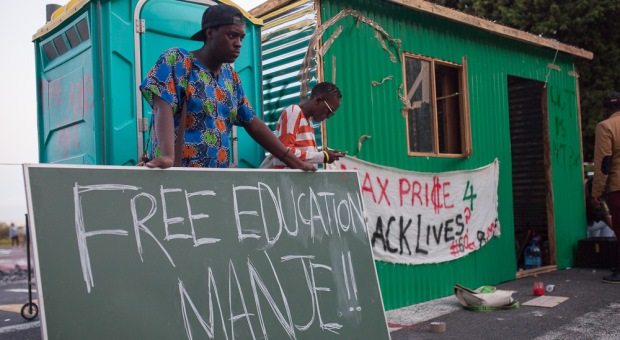 This week, universities and technikons across South Africa were hit by a number of student protests, over issues including crime, misappropriation of NSFAS funds and the suspension and expulsion of students of earlier protests. THE DAILY VOX rounds up what’s been happening at VUT, Durban’s Thekweni FET college and UCT.

Classes at VUT were suspended on Thursday, and students ordered to leave, after a number of university buildings on the Vanderbijlpark campus were torched overnight.

Following a number of reported incidents of theft, VUT students submitted a memorandum to the office of the Executive Chairperson of the Student Support Services demanding an immediate termination of Mafoko Security contract.

Clashes between protesters and security personnel followed the university saying it was not able to immediately terminate the contract with Mafoko immediately.

Executive Chairperson of the Student Support Services Dr Segopane Seroka told The Sowetan that an alternate security services provider must be engaged before Mafoko can withdraw from the campus. â€œWe cannot go without security in our campus where thereâ€™s a high level of conflict and crime because the burning of property by students and the stealing thatâ€™s going on can lead to loss of life and property,â€ he said.

According to VUT management, the university in the process of engaging the services of another security company.

Meanwhile, PowerFM reported that the ANC Youth League have blamed the protests at VUT on the EFF.

#VUT is up in flames. If indeed the rumors and allegations surrounding the reasons are true, Malema must condemn EFF Student Command

Importantly, however, this is not the first time students at VUT have expressed concerns about their safety. Last year students spoke up in the wake of murders on res. â€œThe university must utilise the student levy and get proper security for students on campus. If students are not safe on campus, how can we expect them to be safe off campus? Safety has to begin on campus, and the landlords will follow,â€ then SRC president Troy Mathebula was quoted saying at the time.

The Daily Vox spoke to Jackie Shandu, who is the head of students at the college, and also the deputy chairperson of the EFF in KZN to find out who claims students had prepared to hand over a memorandum to the rector when management responded with violence.

â€œStudents from Thekweni college have been arrested after the fired act by police on Wednesday. During student protests against the misappropriation of NSFAS funds by their institution. Students are asking questions about the money that was given to the institution to help them. Those funds have been stolen. And there are a number of people that are fingered that are suspected to have benefited from that within the management of the institution. So students demanded that the rector of the college addresses them. And face them into his confidence about the money that was received from the National Student Financial Aid Scheme. That is what the fight is between students and the college.

The institution cannot account for the funds given to it by NSFAS. Because there are students whose transportation costs, meal allowance, book allowance and all these other things are not being paid. But in terms of how the funding of FET colleges goes is that all students are given the same amount of funding. Allocation is the same – the package per student is the same and it covers everything. It covers tuition, it covers meals, books, accommodation and transport. But even in terms of the contract we have seen some students have just been given – they just have their tuition fees paid and nothing else. But the institution is unwilling to explain to students how this is possible.

The management is refusing to respond to students. They are trying to contain the situation and they donâ€™t even want the media to get involved. Thereâ€™s been ten millions of rands that have been stolen that are supposed to go and assist the studentsÂ to acquire education.â€

Major Thulani Zwane, a spokesperson from the SAPS said, â€œWe can confirm that students embarked on a protest, blockading the Randles Road and stoned police vehicles. Public Order Police and Sydenham police were alerted, they instructed them to disperse which led to the arrest of eight students. They were charged for public violence and appeared at Durban Magistratesâ€™ Court. Court appearance results are unknown at this stage since the docket is still at court.â€

The University of Cape Town

â€œThereâ€™s a group of students from Rhodes Must Fall who are protesting against this weekâ€™s judgement at the high court. The judge ruled against five students to have the interdict made final – which is essentially an expulsion because they cannot be on campus indefinitely. And on top of that, students are also facing suspension, facing expulsion and disciplinary charges. So right now the university exercised every single power that they have as a state institution. They have repressed students for dissenting against them, repressed activism, defined what violence is and acted violently against that. So students are just powerless right now. Peopleâ€™s lives have been ruined by this, by the university. They use every single resource that they have to make sure that the same people that they perceive as being the masterminds of protests – itâ€™s been the people that they want to make sure that they never see this campus again.

Generally, black students walk past the scene. To describe the scene of the protest, itâ€™s the remembrance of Shackville, thereâ€™s a black cross and it says “Remember Shackville”. Thereâ€™s a huge banner that says “Death of a dream”. And the response there is mainly from black students and a few white students as well. The sad thing right now is the university is responding extremely against students right now. And nothing has happened on campus since Shackville. So it’s beginning to feel like the university is not only interested in responding to instances of escalation. But they’re just interested in anything thatâ€™s strong enough to threaten their reputation, to threaten their property, to threaten anything around themselves.â€