Home Photo Essays â€œNot in our name!â€ â€“ Joburgers come out in their numbers to...
WhatsApp
Facebook
Twitter
Email
Print 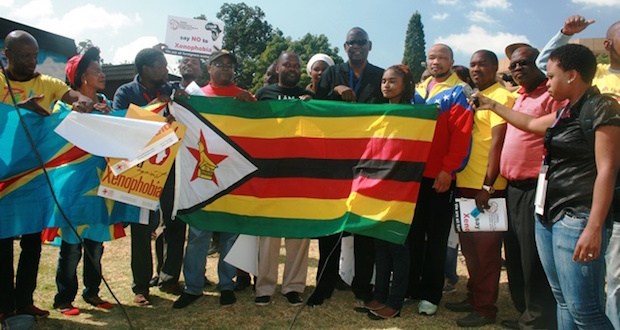 On Thursday, thousands of people took to the streets of Johannesburg in The Peopleâ€™s March Against Xenophobia â€“ an emergency solidarity march that was organised to condemn the xenophobic violence that has engulfed South Africa. PONTSHO PILANE was there.Â The march began at Pieter Roos Park, made its way through Hillbrow and ended at Mary Fitzgerald Square in Newtown. Zwelinzima Vavi (above, centre), one of many high profile people present at the march, told protestors thatÂ unemployment and big businessâ€™ exploitationÂ of workersÂ had contributed to theÂ unrest. Although the initial crowd was small, people joined in their numbers as the march continued alongÂ Empire Road and through Hillbrow. According to the BBC, about 30,000 people participated in the march. Through their demonstration, the South African Prisonersâ€™ Organisation for Human Rights wanted to show that xenophobia is racist and criminal. Many street vendors looked on and cheered for the crowds.Â OneÂ Somali shop ownerÂ saidÂ the march had brought her to tears as she did not expect so many South Africans to stand in solidarity with foreigners. â€œItâ€™s been a hectic two weeks and we have been living in fear,â€ she said. The crowds were chanting â€œWe want peaceâ€, as they walked down the streets. Many foreign nationals cheered as they watched the protestors go by. â€œWe are one. Today we put all our differences aside and make South Africa a better and less discriminatory society. It wonâ€™t be easy but we will work through our prejudice and anger,â€Â said one supporter. Several NGO groups were present at the march, includingÂ the African Diaspora Forum, the Consortium for Refugees and Migrants in South Africa (CoRMSA), SECTION27, the Right2Know campaign, the South African Human Rights Council and Doctors Without Borders (MSF) attended the march.

The march ended at the Mary Fitzgerald Square in Newtown where speakers took to the stage to condemn the violence and prejudice.

“We are coming together to say xenophobia will not succeed in our country and lifetime. We are together for unity and to ensure that a message is sent out loud and clear,â€ Â Gauteng Premier David Makhura told the crowd.

– All images: By Pontsho Pilane.Â