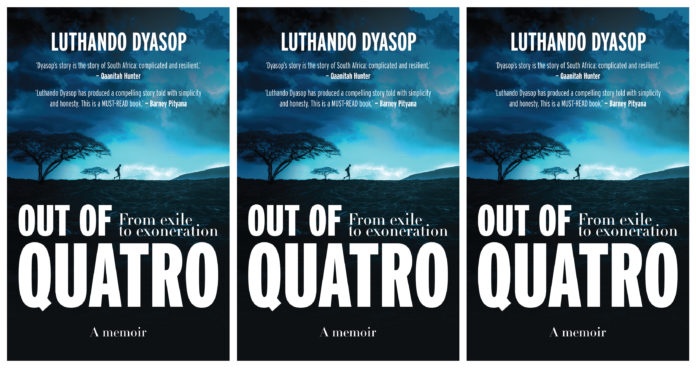 Out of Quatro: From exile to exoneration is Luthando Dyasop’s story. The book is a story not only about Dyasop’s extraordinary life, but also about a tumultuous time in ANC history. Decades after his release from Quatro, Dyasop has found his voice to tell his story.

An extract from the book has been re-published below with permission from Kwela publishers.

Leaving Quatro was a celebration on its own. It was like being promoted from subhuman to being human again. We were all eagerly looking forward to being out there to mingle in a free world and stake our claim to our rights as citizens: to live long enough and die naturally.

Yes, it mattered not where they were taking us, as long as we were leaving that place of suffering. We would be fine; it was a second bite at life – a vacation the doctor recommended.

On that morning we were dressed in the uniform of all MK general combatants as we boarded a truck. For the last time we had to lie face down all the way until the truck was far distant from the prison. After that we were able to sit.

Two vans escorted us, one in front and the other at the rear. The weather that morning had signs of imminent rain: the atmosphere was humid, and the skies were overcast. We gulped the sweetness of the fresh air as we sped towards Luanda, chatting unstoppably.

There was not a single trace of fear of the guards, unlike inside Quatro – they were there to secure our destination against any likely attack from rebels. Funnily enough, they did not call us by our Quatro names. They had to learn our MK names – things had changed big time! It was time to bridge the gap between us, though tentatively. That boded well for when we came to checkpoints manned by the Angolan police: we were one unit with no misunderstanding among us.

We arrived in Luanda in the afternoon and were taken to a newly opened warehouse. We were not allowed to leave the place and seemingly no other MK members were allowed in. Probably no one knew about our release or our whereabouts, except those in the security department.

There was nothing in particular for us to do there except wake up, wash and eat. This went on for more than a week. Because we were emaciated on our arrival, some of us gained so much weight that Mwezi Twala joked cynically that it was a ‘fattening-up process’ so that when people met us they would not be shocked. Another remark was ‘they were starving us to death, now they are killing us with food’. Many interesting philosophies abounded.

What brought us hope of a better future was when we had a medical check-up and were brought brand-new clothes: shoes, shirts, trousers – you name it. And we all got two pairs of everything. That stimulated discussion about individual plans outside of army life. Somewhere out there life was waiting for us.

When we ultimately left the warehouse, we were taken to the airport where we caught a flight to Lusaka. On arrival there we stayed in the airport lobby the whole day. When it was dark, we were smuggled to a house where we were given supper. We thought we were going to stay in Lusaka, and just as we were getting comfortable and ready to sleep, we were told we were to board a bus to Tanzania. At three in the morning!

When we passed the town of Kabwe we only exchanged glances – no comments. Besides the Tanzam railway, which from time to time was visible, there was not much on the journey to write home about. That railway is historic as it connected landlocked Zambia to the seaport of Dar es Salaam. The Chinese had sponsored it, but unfortunately it ended up not being utilised.

We arrived at the Tanzanian border at night and had to wait until morning to cross over because the customs office was closed. The next day was another long day on the road till at last we got to Morogoro. What struck us was the great difference between rural Zambia and its Tanzanian counterpart. The latter was well developed agriculturally, thanks to the Ujamaa programme introduced by Mzee Julius Nyerere.

From Morogoro we were driven to Dakawa. But first, though, before we could meet the people of Dakawa, we were to be debriefed at a place called Ruth First Reception Centre, or Eighteen. This was the ANC security department’s place. It said something that it was named after someone who had been assassinated by the apartheid regime and would have loathed any association with Mbokodo. We were not surprised when we were told we had to abide by the promise not to tell anyone about our experiences in Quatro and afterwards. They also wanted to know if we still felt the mutiny was justified. Of course, we were convinced that our demands and proposals were justified. Somehow we held a unanimous view, although we were interviewed as individuals.

For us it would have been disingenuous to suggest the opposite. It would not have been reflective of our true selves. Sometimes there’s a point of no return, and honesty to oneself is best rather than complicating things in a web that might entangle everyone involved.

Relations between security personnel and the general membership at Dakawa were sour. The atmosphere was gloomy despite cosmetic changes. Attempts to change people’s perception of the security department had failed, despite Mzwai Piliso having been replaced as head of Mbokodo by Fort Hare graduate Sizakele Sigxashe, since the department’s personnel was unchanged. In fact, Mbokodo had consolidated itself after the mutiny and permeated all structures, which could lead only to low morale and disillusionment.

Dakawa was a centre where demobilised MK combatants from all detachments were stationed. There were family units and singles at V4 village. We from Quatro initially pitched our tents and had our own kitchen. That setting, close to V4, was sheltered by trees and so pleasing to the eye that one Bernard named it Hawaii. And Hawaii stood out alone as a vibey place because of the positive attitudes of its inhabitants, despite everything.

That positivity was soon to inspire the neighbouring V4. The welcome we got was warm, but it got warmer as time went on because of our willingness to revive Dakawa’s almost defunct political structures: the Zonal Political Committee (ZPC), the Zonal Youth Committee (ZYC) and the Regional Political Committee (RPC). These structures had been democratically elected by members but were finding it difficult to sustain themselves without support from the leadership, more especially from the headquarters in Lusaka.

The local administration was fully operational because it was apolitical. Despite that, nothing could uplift the people from the doldrums. The housing project had stalled because of a lack of enthusiasm and involvement. People pitched up at work, loitered, got something to eat and dismissed themselves. Some would go to neighbouring Mabhana and Magole villages and spend the rest of the day imbibing alcohol.

With our never-say-die attitude, the need to involve ourselves in all matters concerning us, be they political, cultural or on the labour front, became a paramount necessity. We wholeheartedly engaged ourselves in all areas.

When the administration saw that we were trying to reverse the pattern we had found to be prevalent, it tried by all means to come aboard. What inspired us about the project was that houses were to be built for all of us in V4. They were of brick and mortar, unlike the tents of Hawaii or the wooden structures of V4. Bar the fact that we were no longer to be active in the unfolding struggle for the liberation of South Africa, it was the improvement in the quality of life that attracted us. Besides, it would be in keeping with the clause in the Freedom Charter that says, ‘There shall be houses and security.’ If we could contribute practically towards the realisation of that dream, then so be it.

Also, with some of us having had experience in building from our work at Quatro, it came naturally for us to choose construction work. We were nurturing a skill and at the same time getting paid. It was something new for us to get pocket money while getting free supplies of food and clothing. For someone who had been in Quatro, it was an amazing opportunity that we could not let go by.

Some of us decided to go the academic route. SOMFACO in Mazimbu was the stepping stone to achieving higher education locally or abroad. Surely everything seemed to be coming up roses. But that was what things looked like superficially, because when we dug deeper we discovered the rot.