Home Palestine â€œI am a Palestinian and I think we can learn a lot...
WhatsApp
Facebook
Twitter
Email
Print 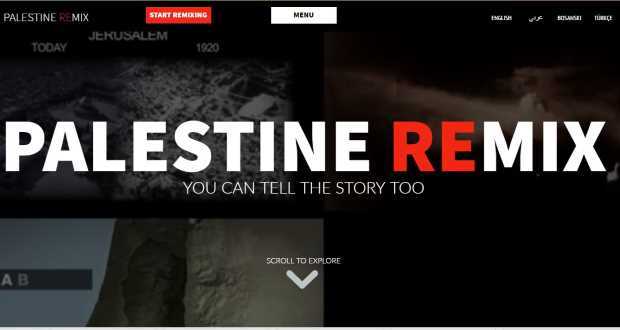 RAWAN DAMEN is a Palestinian documentary filmmaker and senior producer at Al Jazeera. She is also the creator of Al Jazeeraâ€™s award-winning Palestine Remix series. She spoke to Aaisha Dadi Patel about being a female filmmaker,the Oslo Accord, and what she hopes South Africans will take away from the Palestine Remix. As an Arab Palestinian filmmaker woman, I always think that I need to work three times more than my male colleagues to get to where I want to be. Itâ€™s not easy. The problem is the society and the space you work in. Most of your colleagues are men, and if you do not work harder they will not take you seriously.

Before I started doing documentaries on Palestine, I did a series called “Pioneering Women” where I interviewed twelve women from around the Arab world, each in her own domain – arts, literature, astronomy, genetics and science – and all those women, working in different domains, told me the same thing. They needed to work much harder to achieve a fingerprint and make a difference on a pan-Arab level.

I make my own films, and work as a producer, researcher, and director. I also commission filmmakers within Palestine and also Arab and non-Arab filmmakers around the world who make films about Palestine. We got lots of excellent documentaries about Palestine which were made in Arabic and shown on Al Jazeera Arabic. Those same documentaries have been re-versioned and are now available in four different languages – Arabic, English, Bosnian and Turkish. They have a long shelf-life, which means they are not like the news or small features that you broadcast once or twice. I started thinking about a way to get a new life for these documentaries, and we started the Palestine Remix idea. The Palestine Remix is a website which has 120 documentaries in four different languages, and people can not only watch those documentaries and search within the video, but also mix and match the different parts within the video and build their own stories. It’s a fully interactive website, based on classical documentaries.

The project was launched 18 months ago. We’ve had 3 million people visit the website, and ten thousand people have made remixes, but the success I am most proud of is getting the project into the universities. It became an educational tool – teachers and academics in the UK, Holland, Norway, Morocco, Egypt, Qatar, Jordan and even Palestine – started using the project in their classes while teaching about Palestine, the peace process, Middle Eastern history. Teachers began to understand that the new generation is more into visual material. After I did a four-hour documentary on the story of Palestine from 1799 until today, Al Nakba, I did a documentary called The Bitter Peace, on the peace process between Egypt and Israel. And then The Owners of the Land, a five-hour series on the Palestinians inside Israel. So when I started after that with The Price of Oslo, I thought at the beginning that it will be easier than my previous project because itâ€™s talking about a peace process that started in 1993 with the first direct negotiations between the Palestinian Liberation Organisation (PLO) and Israeli Labour Party. But when I got more into reading, I discovered that there is no single history book that talks about the peace process in the informative comprehensive way at all. I had a lot of gaps in the story that needed to fill, and I interviewed Israeli, Palestinian, Norwegian key players in the story as well as historians to make sense of the story and discover that the story goes back to 1974. It didn’t start in 1993 as many people may think, and there is no single document of what happened in that negotiations – no documents or filming of those eight months of secret negotiations. It’s a full-time, one year job to do a documentary, especially on hot politics like this. You have hundreds of hours of footage to cut down to 1-2 hours.

I try in the films that I make and commission to portray Palestine differently. Not only in a sad, crying kind of way – that all we do is cry about the injustice that we encounter – because this is something wrong that many Palestinian filmmakers do. In Al-Nakba, my four-hour documentary, there is not a single drop of blood, and I made sure to have information more than anything else. Of course, I have Zionists who tell me after they watch my documentaries that itâ€™s biased, there isnâ€™t a Zionist narrative of saying Palestine belongs to the Israelis. But from my point of view, it isnâ€™t a Palestinian narrative or an Israeli narrative – itâ€™s the story of what happened in reality, how the Zionist project worked, and how the occupation happened. This is what I am trying to reveal in my documentaries. Recently when I spoke about Palestine Remix in Holland, we got a Zionist saying that this is “Pallywood” – Palestinian Hollywood. She said, â€œyou are making films that are deceiving the people.â€ And I think that the best reply to that is that historians from around the world – South African, British, French, American – have verified those documentaries, and they have been shown on Al Jazeera English internationally and got a huge response. We were keen to verify all the information and not get any wrong information or propaganda that will harm any of the documentaries.

The Oslo Accord’s effects still shape the lives of Palestinians today. When the papers were signed in September 1993, the life of the accord was set to be five years. But that didn’t happen. Now for 23 years it’s been dragged – it’s like putting expired food in a can and saying it has an expiry date.Â I’veÂ [seen] a generation that was born when the Oslo Accord was signed and now they are at university, waiting for this peace to happen in Palestine. Unfortunately the Zionist project – which is a very racist project – dehumanises the Palestinians and so all of Palestine is under occupation. Every small city or village in the Occupied West Bank is isolated from the others by the Israeli military settlements. Even in the Gaza Strip, a besieged area under occupation – there is no ship, aeroplane, or car that can access there without Israeli permission. The Zionist project is reaching its climax these days because it started hundreds of years ago – it was a slow planning until the big ethnic cleansing in Palestine in 1948 when 850, 000 were kicked out of their homes and villages. Now itâ€™s a slow ethnic cleansing happening towards individuals and small groups. If you look at the situation in Palestine you will be very pessimistic – itâ€™s a very sad situation. I think that one day – maybe not someday soon though – people will watch the documentaries that myself and other filmmakers make about Palestine and say some people were trying to raise a different voice and resist the ethnic cleansing through visual mediums, and this is what we were trying to reach.

This is not only for Palestinian society but also to the world, and part of that is to the South African society – we would love for them to know more details about and the truth about whatâ€™s happening in Palestine. There is a problem in the portrayal of the story of Palestine at the hands of Israel – they say Israel bombed this place in Gaza, killed 20 people – we think of these incidents as isolated and donâ€™t look at them in the broader context. I think the majority of the young people in Palestine are fed up with politics. I think it’s a problem all around the world – the young generation lost hope in the politicians and the political movement. And I think this is the major problem we are facing today – the younger generations feel betrayed by the older ones, and this is exactly what the Zionist movementâ€™s aim is: that the people will lose hope and say â€œwe cannot do anything, we have no power, no means of resisting.â€