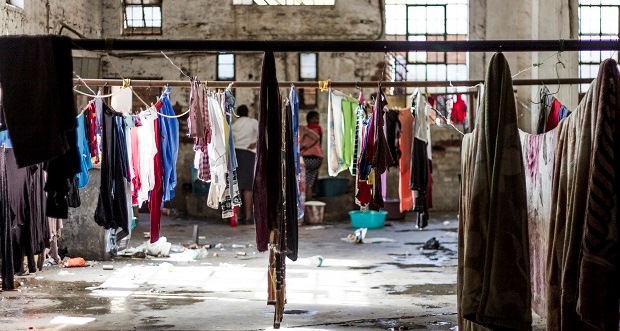 Not everyone benefits from the development of the burgeoning urban neighbourhood straddling Kruger and Fox streets in Jeppestown. A two-minute walk up Fox street ushers you into the reality of the development and the tradeoff between the lives of the city’s marginalised for craft beer.

The Maboneng precinct markets itself as an urban neighbourhood where residents, businesses and tourists are part of a growing tribe connecting the heart of the city of Johannesburg. An integrated social space with a string of artisan restaurants, high-end retail stores and overpriced lofts where the hipsters come out to play on weekends, the precinct is also home to all things creative, including an art gallery and an independent cinema.

Half a kilometre away, self-employed Ntombekhaya Njiyela lives in a 3×6-metre room with her husband and five children in what used to be a factory building on Janie street. Most of the room is filled with a wardrobe and a three quarter bed balanced on four repurposed buckets. The three-storey building on Janie street has been separated by flimsy cardboards into 170 flats, offering very little privacy to residents, with less than seven toilets and one tap.

Tenants previously paid between R300 and R850 in rental per month. However, itâ€™s been months since they last paid rent. Njiyela says tenants refused to pay rent after the owner increased the rent rate twice in a year and served them with an eviction notice, which they protested against. Tenants decided to take ownership of the building, now called Lalanathi, so the owner has done no maintenance or repairs on the building since, and has left the residents to manage the building themselves. “It’s hard to fully enjoy the food and goods at the market when you know that just around the corner there are homeless people sifting through trash cans outside of rundown buildings,” US exchange student Danette Frederique says after visiting the Maboneng Precinct in Jeppestown.

Interest in regenerating Johannesburg’s inner city has grown in recent years. Regeneration projects now stand to displace the inner city’s low-income and unemployed population. Approximately 1,305 buildings in the city were never intended to be places of residence. These erstwhile industrial and corporate spaces, now house more than 250,000 people.

As columnist Andrew Ihsaan Gasnolar notes, “Gentrification is the wet dream of developers and investors but it is the scourge that has taken root across South Africa. The ‘othering’ that has taken place has made those who are poor, dejected and vulnerable, less “they are made to feel that they are unwanted and not cared for.”

“We’re not against the development of the city or area, but if it happens in a way that excludes other people, it’s a problem,” said Njiyela. “I used to get nervous when I had to leave the building because I’d fear that I’ll come back from wherever to find my things thrown out onto the streets but lawyers from SERI [Socio-Economic Rights Institute of South Africa] have come to our rescue”.

On June 14, the Johannesburg High Court rescinded the eviction order against the 463 women and men living in a building on Janie street. The judgement came after SERI argued that the order could not stand due to the flaw in the notice issued to residents, which would render them homeless. Nomzamo Zondo, SERI’s director of litigation, said courts are under a legal duty to investigate the needs of poor people facing eviction and to grant orders that will not lead to homelessness.

According to SERI researcher Dennis Webster, residents of Jeppestown who have lived in the area long before Maboneng was constructed face gradual displacement and homelessness through eviction. This happens because property developers buy up the buildings they live in, evict them, and refurbish the property for occupation by higher-income earners.

He argues that urban regeneration can happen without gentrification through the state’s involvement in the property market.

“The state needs to be more involved, both by requiring property developers to set aside a proportion of their developments for low-income families and by entering the property market itself to purchase land and buildings to be used for public housing for people who cannot afford to rent property on the private market,” Webster says.

Njiyela and residents like her have never been to the Maboneng precinct because, “it’s expensive and not for people like us”. Bush Sithole is another of the longtime residents in Jeppestown who has not set foot in Maboneng, even though itâ€™s a short walk away. Sithole used to be a caretaker of the factory (now converted into flats) 20 years ago. He walks through the dark and narrow corridors of Lalanathi as he tells the story of how the factory was converted to flats. â€œWhile I was working here as a caretaker some years ago, the employers refused to pay us for some time then ran away. Some of the employees decided to occupy the factory demanding their money but the bosses never came back. People began living here so the owners of the building used some cardboard to divide the place into flats and allow people to rentâ€. Last year, hundreds of residents in Jeppestown were left homeless afterÂ they were evicted from buildings surrounding Maboneng. The precinct developer and CEO of Propertuity, Jonathan LiebmannÂ denied allegations that owners of property at the Maboneng Precinct were behind the evictions. He said most of the buildings bought by Propertuity were either vacant or had been previously used for industrial purposes.

Propertuity have bought 32 more properties in Jeppestown, with the latest development planned to house luxury retail brands and a gallery. British architect David Adjaye will lead the renovation of the buildings which will include luxury apartments, restaurants, a rooftop cafÃ© and a boutique hotel.

Amidst the challenges of gentrification, however, a few people do straddle the separate worlds of Jeppestown.

“Darkness makes everything seem impossible. But if you could make it through the night, there’s light in the morning,” reads a placard on aspiring musician, James Hadebe’s wall. Hadebe lives in Lalanathi but spends most of his time in Maboneng, where he records his songs and soaks in the lifestyle. He dubs himself the rap god of Maboneng. “If you want to live a certain life, you must surround yourself with people living that lifestyle. I’m sending positive messages to the universe to make sure it happens,” he said.

Like him, many others in the city aspire to the lifestyle ensconced by Maboneng.

Editor’s note: The reporter contacted Jonathan Liebmann’s office for comment but received no response. This story has also been clarified to read, “The precinct developer and CEO of Propertuity, Jonathan Liebmann denied allegations that owners of property at the Maboneng Precinct were behind the evictions”.