Home Features Israel is why a popular academic is pulling out of this year’s...
WhatsApp
Facebook
Twitter
Email
Print 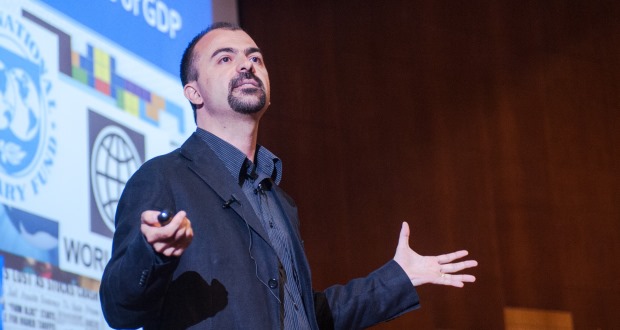 As South Africa’s drought intensifies, the Mail and Guardian in conjunction with the South African Department of Water and Sanitation has organised Water Summit 2016 to focus on issues of water management for poverty alleviation. Director of the Centre for the Study of Governance Innovation and economist at the University of Pretoria, Professor Lorenzo Fioramonti, was set to be a Â panellist at the event.

HeÂ predicted the water crisis early and has been widely published, but pulled out of the event afterÂ hearing Israeli ambassador to South Africa Arthur Lenk would also be speaking on the panel,Â and that there is an entry fee of US$ 50. We spoke to Prof Fiaramonti more about his decision.

1) You are involved with issues regarding “water governance” and the panel is about water security, a serious topic in which your skills are surely needed. Why did you withdraw?

My work on governance transformation in general has been quite relevant to shift the political and economic debate in South Africa from simplistic technical discussions (the so-called “techno fixes” all too often presented as magic bullets to solve all sort of problems) to a comprehensive analysis of the water crisis as a result of a broken development paradigm, a commodification of a public good and a system of consumption that is highly unequal and unsustainable.

In 2014 I predicted the imminent water crisis and, when it broke out in late 2015, I got numerous invitations to give public lectures and interviews. Everybody seemed surprised, when for me it was clear that this was a crisis in the making and that a complicit approach to economic governance has made it possible.

Against this backdrop, I saw the invite by the Mail&Guardian Africa and the Department of Water and Sanitation to be a keynote speaker at the Water Summit 2016 as a sign that a serious debate about transformative actions in water governance had finally arrived. The organisers themselves indicated to me that the summit would focus on water governance in light of the sustainable development goals and the quest for poverty eradication. The summit seemed to have a transformative socio-economic agenda, which I endorsed.

As it turns out, things were quite different. First of all, besides being hosted by a government department, those interested in my talk would have been expected to pay a 50 US dollar fee (about R800). This inevitably cut out a lot of civil society voices, as well as individual citizens interested in participating in an open conversation about the future of water in this country. Moreover, as I learned from the media, a public official from Israel would be participating on the panel, apparentlyÂ to present Israel’s advancements in desalination and drip irrigation as a potential best practice for South Africa. No African voices were invited to speak. Nobody from the water caucuses or even local administrations, which deal with water shortages every day and need to be involved in a public conversation about the future of this precious resource.

This was very problematic to me.

Charging such a high participation fee was likely to turn the event into a “talk shop” for the wealthy upper class. Moreover, there is an international academic boycott against Israel’s public officials, which is supported by progressive groups both in Israel and Palestine, and has a lot of support in South Africa too. This boycott is key to help the cause for sustainable and equitable peace in the Middle East, highlighting how behind the facade of technological solutions lies a systematic exploitation of Palestinian communities.

2) But surely the panel needs your expertise and not a boycott of Israel at this point? Why are you boycotting Israel/Ambassador Lenk, and why is it important at this juncture to make this statement?

It was important to make this statement because our public debate needs a more profound understanding of the nexus between development issues and socio-economic as well as political rights. By withdrawing, I’m delegitimising the summit as the appropriate context within which to discuss the future of water in South Africa. Through this action, I’m helping the debate to move out of the Sandton’s boardrooms to become an issue of national conversation.
We can’t pretend our discussions about water are happening in isolation.

My research shows that we are running out of water not only because of environmental trends that we have decided to consistently ignore but also because our economic system dictates that we take water away from people in need to feed obsolete energy and agricultural systems, mostly controlled by a small elite. Both our denial of climate change and our preference for massive water-dependent industries are a result of a highly unequal society, in which entrenched economic powers are dictating the terms of the debate and the options available. This must be challenged. The same is true in Israel. There is enough evidence to show how Israel’s policies have taken water away from Palestinian communities. Hiding this through a pseudo-technical debate about water technology would be unacceptable. It is also thanks to my withdrawal and the debate this has generated in the media and in civil society that a lot of South Africans are learning about what’s going on with water in the Middle East and how this is not so dissimilar from what poor communities are experiencing here at home when their water supplies are brought under the control of big industry, e.g. Eskom, and or commercial agriculture.

3) Surely Israel, as an arid/semi-arid country has lessons for us asÂ a country battling water security, or are we missing something?

I have no doubt Israel has many interesting innovations to share with South Africa. I also believe that many of them are not based on new technology, but have got more to do with collective management of natural resources, restrictions on industrial development as well as a more participatory management at the local level. If the organisers were interested in technological approaches, they should have clarified that from the very beginning by inviting a technical expert from Israel, not a government official. It’s hard not to see how this can easily smack of propaganda. Moreover, Israel is not the only arid country with some technological expertise to share with South Africa. Why haven’t other Middle Eastern representatives been invited to speak? They also have embarked on impressive (although equally questionable) technological processes to extract water. Why this exclusive focus on Israel?

4) So Israel has been taking water from Palestinians and passing itÂ off as a success story? And how do they manage to sell it as aÂ success?
This is the elephant in the room of Israel’s position on water technology and its attempt to convince South Africa to go down the same route. We cannot ignore that, regardless of the specific technology the Israeli government has embraced, it is based on an unequal and often oppressive policy. As columnists inÂ The Daily Maverick have pointed out, Israel’s alleged success in water management is a “constructed fantasy”.

5) How should this event have been planned? Who should have beenÂ included or excluded?Â

Knowing the Mail and Guardian and its history, it really strikes me that an event called “water summit” and presented as a public dialogue on the nexus between water, sustainable development and poverty turned out to be a conversation among wealthy participants, with a clear input from a country whose water policy is based on the systematic exploitation of an entire people. I also wonder what is the involvement of the SA Department of Water and Sanitation as participants have to pay such a fee to attend. By contrast, I expected the event to be an open gathering with invitations sent out to civil society groups and local administrators, especially those fighting for water as an inalienable right. It is sad to see that a newspaper with such a progressive history is organising a very problematic gathering, which smacks a lot of propaganda, knowing all too well how sensitive South Africans are to the situation in the Middle East and the many similarities it has with apartheid.

7) Does this elite gathering tell us a little about why we are in thisÂ mess in the first place?

Public debates are becoming more and more centralised, with high fees and special invites only extended to a few. Perhaps this is a general syndrome, which we see playing out every year at the World Economic Forum in Davos, where invitees are all too keen to be seen rubbing shoulders with millionaires and financiers. Where heads of state are happy to pay sky-high participation fees to be part of the business clique running the world. I find this disturbing. And it makes me sad that similar approaches are more and more en vogue these days.

Water is too important to be left to a few technocrats. We need an open national debate, involving as many voices as possible.