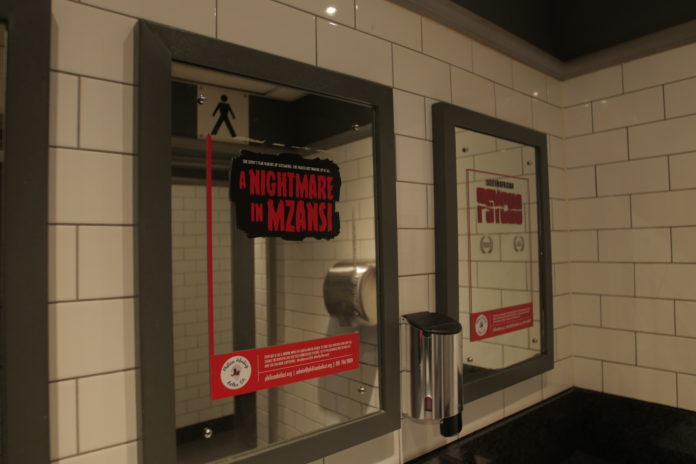 Over the Halloween weekend in South Africa, a campaign was launched to raise awareness about gender-based violence (GBV). Two organisations came together for the campaign. Philisa Abafazi Bethu, an organisation that supports survivors of assault and Hero, an ad agency. It sought to speak to the “real monsters that SA women fear – men.”

Using mirrors in men’s bathrooms, the campaign recreated horror movie posters. The “monster” in the poster would be the man when he looks into the mirror. Jabulani Sigege, Executive Creative Director at Hero spoke with The Daily Vox. He said the campaign was inspired by the murder of Uyinene Mrwetyana. The agency held a gender-based violence workshop, run by a facilitator, to help their staff process.

“It was after this emotional and heart-wrenching session that the idea was born,” said Sigege. They looked at the conversations online and listening to them on the radio. Sigege said it became apparent that “South African women were living in fear, wondering when – not if – they were next”. The agency realised that while women were living in fear of men, men did not realise how “their very being made women feel threatened.”

It was this reason the agency decided that men needed to be shown the reality. For Halloween, the agency realised that “this day of all things meant to be scary would be the perfect time to kick off the campaign”. Their main aim was to make South African men see how South African women see them.

In order to ensure their message reached the very people it was targeting they chose men’s bathrooms as a place to display the campaign.

The campaign consisted of vinyl decals put up on the mirrors, in the style of horror movie posters. The difference was that the “monster” that men would see would be themselves. Additionally, the poster had the message saying that the men could make a difference by getting involved with Philisa Abafazi Bethu (Heal Our Women), which was the agency’s client.

They targeted establishments where they thought the patrons there most needed to receive the message. Based in Cape Town, several establishments including Dubliner’s, Bob’s, Fat Cactus, Café Manhattan, Fireman’s Arms, and Bombay Bicycle Club participated in the initiative.

One manager told the agency “To be honest, the guys who will be here are actually the ones who need to see this message but I can’t risk a powder keg”.

Sigege says there has been a positive reaction to the campaign, even though some men have likened it to the “Men Are Trash” campaign. He says there is a fundamental difference between the two.

“Our campaign doesn’t say or imply that men are monsters – it simply and clearly states that is how women see men, due to what’s happening in the country, and that men can make a difference to change this,” said Sigege.

The current posters up in the venues will remain until a second part of the campaign will launch on 25 November 2019. This is when the 16 Days of Activism for No Violence Against Women and Children begins.

Sigege says the agency is looking forward to continuing to work with Philisa Abafazi Bethu in “order to help get South Africans to create a new normal – one where an incident or story about gender-based violence isn’t just another day in South Africa.”