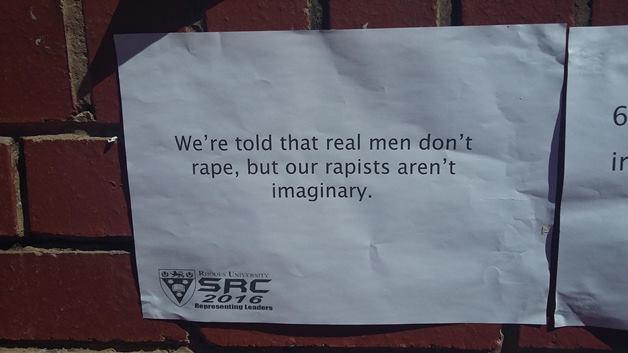 Naledi Nokukhanya Chirwa, member of the EFF Student Command and one of the protestors from the #RememberKhwezi demonstration at the IEC results centre on Saturday, spoke to The Daily Vox about their reasons for choosing to disrupt President Jacob Zumaâ€™s speech – and why the conversation on rape will only end when rape does.

We decided to demonstrate a protest in remembrance of uKhwezi and all the rape survivors in South Africa. We thought Zumaâ€™s speech was the perfect platform to have the whole nation witness and actually start realising that we are serious when we say that this conversation must happen. So we staged a protest, a peaceful silent protest. As Zuma got on the podium, we also got up and stood there with our placards.

The conversation around rape should not stop until rape stops. We are bearers and witnesses of this cruelty, hypermasculinity and misogyny that is performed on our bodies, identities and personalities. We are responding to the violence. It’s really sad that this country is at war with itself – and does not want to hear the words victims of violence have to say. In doing so, we are the ones that put our stamps of approval over these rapes that are happening. Itâ€™s crazy that no one is asking, â€œWhereâ€™s Khwezi? How is she doing?â€ Nobody is asking for a response from Jacob Zuma – why? Why are we defending rapists and all these men who perform hypermasculinity?

So we are the ones who have to explain the protest and the rape… not Jacob Zuma? Not the rapists?

Itâ€™s not the case that political leaders are let off more easily about rape than others. I mean, of the 60, 000 cases last year, only 6, 000 go to court. The other 90% got away with rape. Even those ones that got taken to court get away with it, because at the end of the day, we get raped and whether you get acquitted or not – the rape happened. Nothing, no kind of justice system of vengeance can pay back the crime they do on our bodies. So they do get away with it regardless of who they are. They get away with it.

We have rape stories in our own families that we ignore. We speak up about only on the one day that we have courage. So [Saturday], as much as it was about president Jacob Zuma and his friends, it was for the whole country. Thatâ€™s why we waited for that moment, thatâ€™s why it happened at that moment – the universe agreed that it should happen at that moment.

Because there can never be a right time or place to speak against rape. Especially because your silence is so loud.

People are saying that we humiliated the president, but if thereâ€™s anyone thatâ€™s humiliated at this moment, itâ€™s Khwezi. Her name is now stripped of her identity and now carries the tag of â€œrapeâ€. That is the biggest humiliation ever – that she now has to live with an identity that she did not ask for. All because we are a sick nation.

So Jacob Zuma is the one that's humiliated… not Khwezi? Not the one in three? Guys…