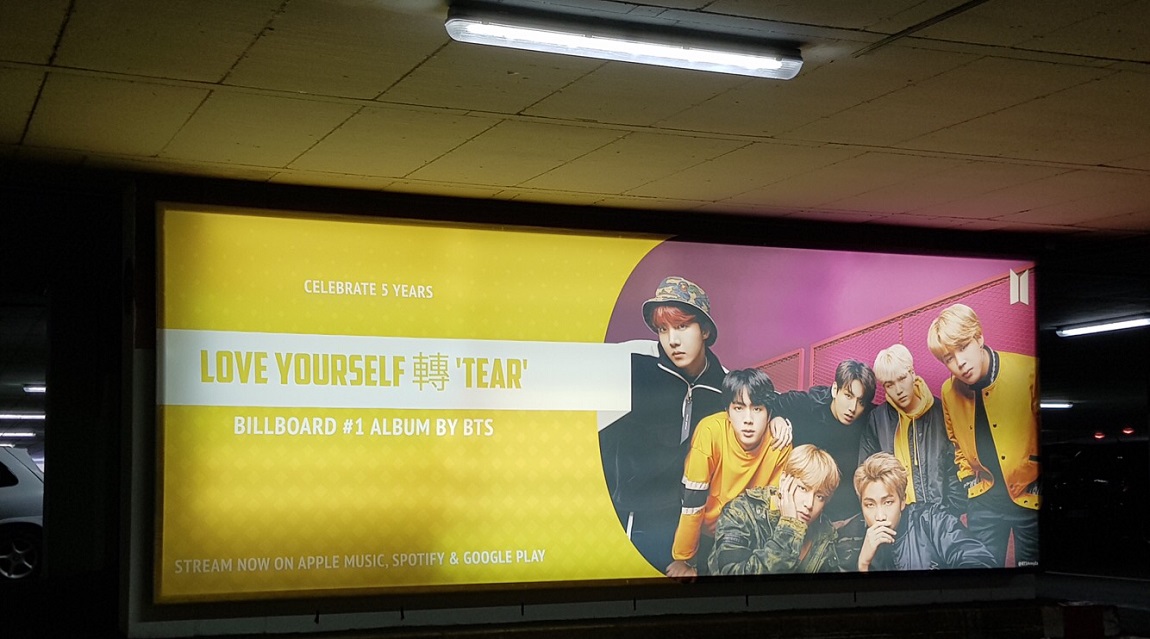 From 1 June to 4 July, two billboards of K-pop group BTS will be displayed at the Canal Walk Shopping Centre in Cape Town. This is to celebrate the fifth year anniversary of the group who debuted on 12 June 2013. SHAAZIA EBRAHIM and FATIMA MOOSA spoke to Naazneen and Tagseen Samsodien of the BTS ARMY fan account behind the billboard.

“I used to see them on social media all of the time. I’ve been an ARMY for about a year. After the Billboards last year they were everywhere and I have a very visceral memory of coming home on a Friday and just going dammit who is this group I’ve been seeing everywhere. I went onto YouTube and that was the beginning of a love affair with them and their music and their message,” said Naazneen.

Naazneen persisted in getting Tagseen to listen to BTS and after watching her first Blood, Sweat and Tears video, Tagseen was hooked too.

me: * sees BTS billboard *
friend: no no please no
me:

The pair said they decided on a billboard to celebrate the group’s fifth anniversary because they couldn’t find any fan projects that were as impactful and they wanted to reach the wider community and not just fellow ARMYs. Billboards have also been used by the wider international community to celebrate BTS.

“I think for me mainly it’s threefold. The one thing is pure and blatant exposure that it makes people curious. It might also be a case of people have heard of BTS and now they’ll see BTS and why am I seeing them everywhere. But I think mainly for both of us the one thing we both wanted was a celebratory initiative that South Africans can be proud of and have fun with,” Naazneen explained as their reasoning.

“In the space of two and a half weeks, we went from oh my word this is possibly a reality to oh my word it’s been installed,” they said.

Naazneen and Tagseen are the admins of the @BTSArmyZa Twitter account along with a third member. They said amongst the three of them, they crowdfunded the billboard themselves because they didn’t want to ask SA ARMY to fund it.

“This project came about because we’re a little bit older and perhaps we have more resources at our disposal that younger SA ARMY does not have,” Tagseen said.

“We work full-time but this is a part-time passion project,” Tagseen said. They started their BTS fan account because they spotted a gap in the South African Twitter market in terms of relevant information for local SA ARMY like the times that content is airing, how to get merchandise, where to get merchandise, what it costs, and how to get BTS on to the radio.

They chose Canal Walk as the location for the billboard because it was the only shopping mall that had gotten back to them about it.

BTS Army ZA did try to use a more recent picture of BTS in the billboard but ended up having to use one from the promos of the Japanese album Face Yourself because of picture resolution and copyright cost requirements.

“We are very pleased with how it turned out,” they said.

“South Africans are way behind the curb in terms of what K-pop is about. They might have heard of it but I don’t think they consider it a serious genre by any stretch of the imagination,” Naazneen said

Previously, South African ARMYs tried to get local radio stations to play BTS by following the lead of international ARMY and flooding the Twitter mentions of local radio DJs requesting that they play BTS music. But the strategy was unsuccessful.

Just had to stop here to get these pics!!!! @BTS_twt pic.twitter.com/BDyIIAVBmc

At the moment, the two are working with other South African ARMYs to get local radio stations to play BTS on air. They will send six or seven South African radio DJs at different radio stations a copy of BTS latest album Love Yourself: Tear with a short description of who BTS are and what they and their music are about.

“It’s an incentive to say: take a look at this, take a look at something that’s completely different to what you’ve seen or experienced before and hopefully with an open mind you can understand that there’s people who are passionate about this group, and are passionate enough to send you something with kindness to say have a listen and tell us what you think,” said Naazneen.

They have also reached out to 5fm DJ Das Kapital and will be meeting with him to discuss and understand how South African music, charts, and radio works.

when i tell you i yelled in canal walk’s parking lot #btsfestasa pic.twitter.com/scKG5nDdNw

11 Reasons You Should Stan BTS
Redefining masculinity the BTS way
Hixtape is the lituation we never deserved
6 K-pop groups that are a must listen
Hereâ€™s Why BTS Has Such A Strong ARMY In SA
EXO Inspires South African EXO-Ls To Give Back
All The Words You Need To Know To Join A K-Pop Fandom
K-Pop Idols And Blackface: Itâ€™s Not Okay!
Extreme Pressures And Fetishisation: The K-Pop Industry Can Be Toxic
Presenting BTS: What You Need To Know About Each Member