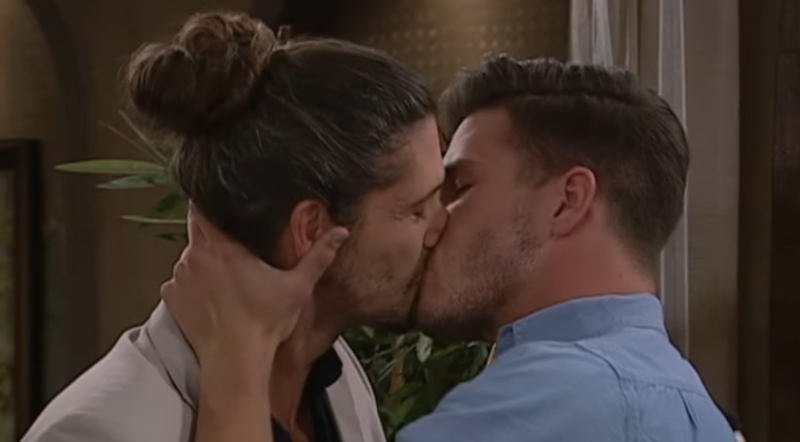 Um, but didnâ€™t Isidingo do this even before gay marriage was legal in South Africa? The popular series, which has been running for 17 years – the same amount of time as 7de Laan – even included a gay wedding just when the country achieved marriage equality back in 2006. Generations followed suit back in 2009. Hell, even Uzalo has an openly gay character.

So no. This is not a historic moment for South African television. It just shows one thing; the Afrikaans show is behind the times, and needed to catch the hell up already.

In Thursday nightâ€™s episode of 7de Laan, two Oppiekoffie waitresses, who had both had a crush on the character Logan, played by Simon Tuit, find out that he’s actually gay when he locks lips with his husband, Divan, played by Arnu de Villiers, in front of them.

Of course, the internet decided to break out into song-and-dance, with the showâ€™s Facebook page pasted with the likes of: â€œYay for 7deLaan for breaking boundaries! Itâ€™s high time you needed a gay couple. They’re such an oulike couple too. To the homophobes: Welcome to the real world.â€

A bit late to the party, we think.

I’m sure 7de laan aim was to get people talking about how ‘groundbreaking’ the scene was. instead, we’re out here giving them blank staresðŸ˜‚

Some tweeps do have a point, though, in saying that 7de Laan is a conservative show for conservative viewers, and the Afrikaans community had a shitstorm when the soapie included an interracial couple into the storyline just last year.

The reality of homophobia is that itâ€™s still very prevalent in society, and even though South Africa has one of the most progressive and humanist constitutions in the world, attitudes are slow to change.

So as much as we shouldnâ€™t be celebrating 7de Laan with more than just a â€œwell done on finally catching up with the rest of South Africaâ€, the showâ€™s team does get a pat on the back from The Daily Vox.