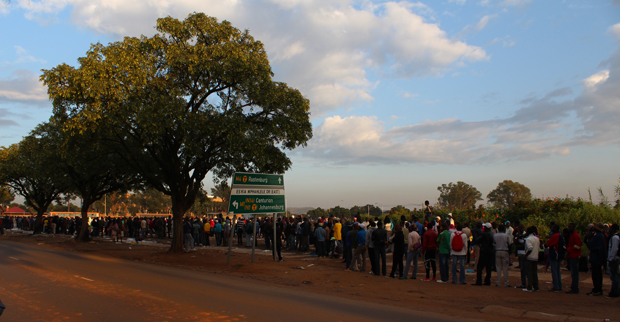 Â A report on corruption levels in South Africaâ€™s asylum-seeking system, called Queue Here for Corruption, has found that almost one-third of refugees have experienced corruption at a refugee reception office. But it doesnâ€™t begin there: the report finds that refugees are at the mercy of corrupt officials fromÂ the second they enter South Africa, a trendÂ that continues as they attempt to access services at the reception offices.Â THE DAILY VOX TEAM summarises six ways in which asylum seekers have to pay to access their rights.Â

Anecdotal evidence of corruption in South Africaâ€™s asylum-seeking system has been available for years, but the Queue Here for Corruption report, by theÂ African Centre for Migration and Society and Lawyers for Human Rights, now providesÂ a more formal assessment of this issue.

Researchers interviewed 928 refugees and asylum seekers while they were queuing at or leaving one of the countryâ€™s five refugee reception offices: Marabastad (Pretoria), Tshwane Interim Refugee Reception Office, Cape Town, Durban and Musina.

For the purposes of the study, corruption was narrowly defined as â€œa request for moneyâ€ â€“ an obstacle that greets refugees every step of the way.

1. Crossing the South African border
The report found that 13% of respondents were asked for money by a border official to allow them to cross into South Africa, and that 12% had paid such a bribe, which ranged from R100 to R700 â€“ with one outlier paying a hefty R2,500.

The data shows that corruption at border posts is less prevalent than at the refugee reception offices; however, considering only those asylum seekers already in South Africa were surveyed, it is impossible to know how many are being turned away after refusing to pay bribes.

In addition, some respondents noted an informal type of corruption, where they had not paid border officials directly but rather given money to the third-party drivers transporting them, who would then effect the transaction.

As the report notes, asylum seekersâ€™ exposure to a corrupt system begins at the border; this means the protection they are seeking is linked to payment, instead of the rule of law.

2. Getting ahead in the queue
Overall, 22% of those surveyed reported having experience corruption in the queue, and in the Marabastad office, 51% of respondents faced this problem. This money was solicited largely by security guards â€“ but also by civilians with links to officials inside â€“ for the purposes of getting to the front of the queue or merelyÂ getting inside the reception offices.

A number of respondents referenced â€œspecial queuesâ€ reserved for those who paid. Of the respondents, 13% said they had been unable to even gain access to a refugee reception office because they did not pay a bribe.

As the report notes, multiple visits often need to be made for a single process to be completed; gaining entry into the office has thus become a nexus of exploitation.

â€œPeople ask for money. Officials donâ€™t help you or tell you what is happening. They play on their phones. Security guards ask for money but not openly. It is a previously made deal. Then they grab the people and take them to the front of the queue. Never women. People from Zimbabwe only get a one month extension and other people from other countries get three to six months,â€ a respondent applying at the Cape TownÂ office told researchers. 3. Renewing permits
The corruption doesnâ€™t stop when an asylum seeker has gained access to a refugee reception office.Â The report notes that 12% of asylum seekers had paid bribes of anywhere between R100 and R2000 for asylum papers (this figure was 24% for Marabastad); while 13% had been asked for money in exchange for help.

Several respondents also said they were able to â€œbuyâ€ refugee status from brokers or interpreters, who have links to officials working at the reception centres.

â€œYou pay for a renewal at Musina on the street. People of the community come to us and tell us to pay. They take your name and permit number and send an SMS to the Department of Home Affairs. It is R500 to R1,000. You are served before the others and you donâ€™t queue. They call us inside. It is Ethiopians, Somalis, and Pakistanis. They think we have money. They donâ€™t propose paying for status. That would be too obvious if Ethiopians got that,â€ said a respondent in Musina. 4. Paying â€œfinesâ€
When an asylum permit is lost or expired, asylum seekers are fined, for amounts ranging from R200 to R3,000. Of those surveyed, 11% (95 people) indicated that they had been fined.

Fifty-nine fines were paid, however, 31 of these were not paid at a police station or court â€“ as the law requires. Of these, 25 fines were paid atÂ refugee reception offices, suggesting that the â€œfineâ€ may in fact have been a bribe.

Furthermore, these fines are able to be challenged in court. However, 79% of those fined had not had their rights explained to them; 80% did not understand their rights; and 79% were not aware that they could take the matter to court.

The report notes that this fining process places refugees at even greater risk â€“ if they canâ€™t afford to pony up, they are then more easily exploited by corrupt officials seeking unofficial payments to turn a blind eye.

The corruption spreads beyond immigration and home affairs officials, with policemen also soliciting bribes from people looking to avoid arrest, and a small number of respondents (0.4%) able to buy their way out of jail â€“ and even Lindela.

With 20% of overall respondents reporting that they had been asked for money to resolve the issue they were at the office on that day to resolve, the lengthy processing period means ever more opportunity for corruption.

â€œIt is corruption everywhere. They are camped from outside to inside. They ask for money. You pay, but they donâ€™t help you. If you can give R2,000 to R5,000 you can get status,â€ said a respondent at Marabastad.