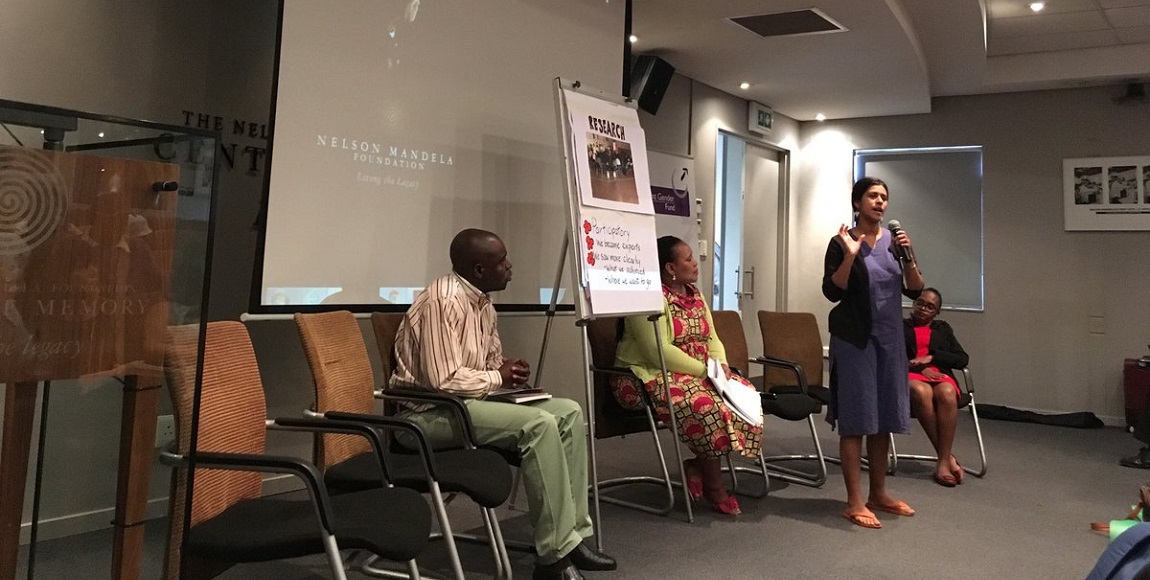 1. Justice and Women – Melmoth, KwaZulu Natal
Justice and Women recently started a much-needed conversation about women understanding their bodies. It found that women in the Melmoth community are taught that their husbands own their bodies. The women dressed according to what men expected of them and used their bodies in service of their husbands and children. Women also have trouble using Zulu words to name their private parts and talking about their private parts which leads to difficulties in reporting sexual violence at police stations. In its objective of getting women to own their bodies, the organisation put together a book called The Book of WOMB (Who owns my body?) which collates stories from the women in the community about their bodies and the relationships they have with them, and reflects critically on the work the organisation does. The organisation found that gradually, women in the community became more open about their bodies and open to conversations about them.

Justice and Women compiled a book called “The Book Of WOMB (Who owns my body?)” to allow women to take ownership of their bodies and normalise speaking about their private parts and GBV. #GBVdocmentation

Rape Crisis Centre found that there was a lack of conversations in households about gender-based violence and that parents did not feel they needed to speak about this issue because it doesnâ€™t affect them or their child. Parents were also unable to have conversations about sex with their children. It says after the workshops and focus groups, learners, parents and the community began to recognise the need to speak about gender-based violence with their children. It found that rape myths (like if a man buys a woman a drink it means she wants to sleep with him) are prevalent among high school learners but that they are easily changed. The centre hopes to create greater awareness and greater action among the community through its campaigns.

The next group is the Labour Research Services. They held meetings w Vaal communities and told stories and held mass meeting to raise awareness around reducing GBV. #GBVdocumentation

4. Lifeline Pietermaritzburg – Msinga, KwaZulu Natal
Lifeline has evaluated the impact of its Msinga Intervention which held open dialogues with community members, trained counsellors and healthcare workers in Msinga to deal with conversations on the effects of gender-based violence. The rural Msinga community is the worst performing performing municipality in the country where less than 20% have access to basic services. In the community, 57% of adults have little or no school; 74% of these are women. The community has a history of communal violence. The community practises customs like ukuthwala, in which a young girl is kidnapped by an older man and his peers to compel her to marry him.

Lifelineâ€™s work focuses on challenging harmful traditions while preserving local culture. It has found that traditional leaders recognise that gender-based violence destroys social climate and are on board to eradicate it.

Lifeline Pietermaritzburg did work in Msinga, worst performing municipality in SA where only 20% receive basic services. Ukuthwala is common here, so is practice where young girls are made to have violent debut sexual experiences,

6. South African Faith and Family Institute (SAFFI) – communities in the Western Cape
In a two-part project, SAFFI documented how religious leaders and faith communities experienced their work. It found that patriarchy, racial oppression and white supremacy are root causes of domestic violence and that while the clergy is spiritually equipped to deal with domestic violence, it is not practically equipped. SAFFI held conversations and dialogues with faith-based communities and religious leaders in the Western Cape to challenge patriarchal cultural norms and religious understandings. Because preachers have a big impact on faith-based communities, it also held sensitisation workshops with religious leaders to transform the way they think about gender. SAFFI worked together with religious leaders to put together a 10-week series of sermons about tackling gender-based violence. It also identified the need to connect the gender-based violence organisations and faith sectors.