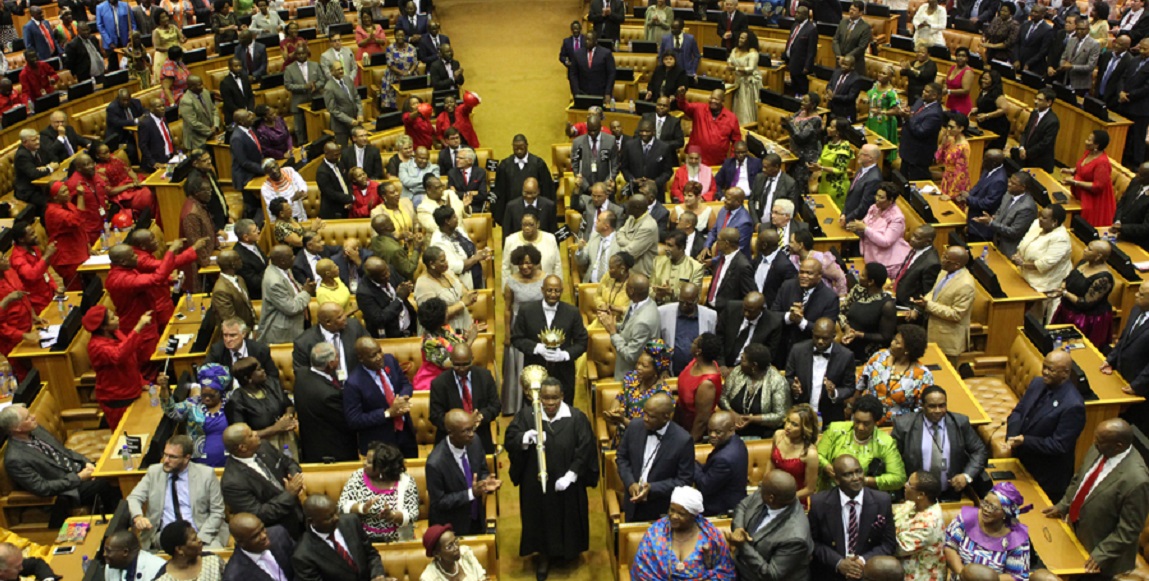 The Economic Freedom Fighters are no strangers to leaving Parliament – whether of their own accord or not – and this time, for President Jacob Zumaâ€™s tenth State of the Nation Address, it was more poignant and important than ever before.

The country is on a knifeâ€™s edge, and even though weâ€™ve been perfecting a balancing act of maintaining some semblance of normality while treading the deep, dark waters of â€œwhat the hell,â€ itâ€™s now more than ever that taking a stand against a government that hasnâ€™t been held to account is important. The people were forgotten in all the politics – and itâ€™s added to the political fatigue.

So here are five reasons that The Daily Vox thinks the EFF having exited #SONA – even by force – was a loud and clear message to the president and his supporters.

1. It really seems like Zuma couldnâ€™t give a fuck

Name calling and serious accusations being flung around, vicious fistfights, members of Parliament being dragged and manhandled (and hitting back with hard hats), claims of the constitution being violated, cable ties and pepper spray in Parliament, metaphorical cows being slaughtered, out of order points of order, sound cuts, army and riot police deployed outside.

In short, it was a mess.

#SONA2017Is #Zuma a psychopath? Why does he laugh when chaos is reigning around him? pic.twitter.com/5xfslx9em1

As Zuma sat in Parliament, watching the chaos unfold before him, more than a handful of South Africans must have thought, â€œwhat does that man think of himself?â€ Yet, he managed to keep his oblivious game face on and seemed to soldier through the pandemonium like a trooper. Except – heâ€™s the cause of all of it.

The fact that his party would rather have an echo chamber in Parliament than the entire democratically elected constituency listen to his speech is the beginning of a slippery slope that leads many disillusioned South Africans to not only vote elsewhere – or not at all – but draws attention to the fact that the Zuma contingency is losing grip on its country and reality itself.

The man has no skaam.

The Gauteng Department of Healthâ€™s negligence resulted in the death of 94 mentally ill patients on its watch. Itâ€™s been a week and nobody has been properly held to account yet – even though there have been resignations, suspensions, and investigations launched. There has been no formal acknowledgement by government that this was their doing. There has been no memorial. No public apologies. Nothing. People died and the ruling party waves its hand like a king waving away starving subjects and makes it disappear like it never happened.

The lives lost in #LifeEsidimeni deserve more than just “condolences” and promises to do better. Where is the accountability? #SONA2017 pic.twitter.com/2rduyto3kz

And the DA, in all its self-righteousness, were accused of â€œusing the dead to play politicsâ€. The humanity of the people who died were forgotten in all the spectacle and thereâ€™s an underlying brokenness in all of it, and it reeks of politicking.

Heard in parliament: Mmusi Maimane you are using the lives of dead people to play politics

Besides the fact that this yearâ€™s SONA was a recap of everything the government didnâ€™t get right, there was not much to celebrate with the actual state the nation is in. Under Zumaâ€™s administration, we have seen not just tragedy, but a complete shambles made out of some of the most important portfolios in government and parastatals – finance, education, the SABC, and SAA to name a few – and constitutionally enshrined rights being violated blatantly and without care of consequence.

One after the other, MPs stood up, all bringing home the same message: Zuma did not deserve to address Parliament as he had violated the Constitution, and Baleka Mbete and Thandi Modiseâ€™s reactions to these MPs reinforced the message. Cope leader Mosiuoa Lekota said all those who were in Parliament had taken oaths of office, “but none of us has broken that oath,” he said referring to everyone except Zuma.

However indignant the opposition might seem, they have a very fair point in that the ruling party cannot rein in one man, whose leadership has seen South Africa take turns for the worse on most fronts. Sure, itâ€™s political. But the mere fact that the opposition has had to resort to name-calling in Parliament is not an indictment on their inability to articulate their thoughts; itâ€™s a sure sign that this is the only way to get any sort of reaction from the powers that be.

Praise poets voice is being drowned out by the EFF calling Zuma a “tsotsi”. #SONA2017

Because nobody else is doing it. The ANC itself cannot hold one man accountable for deceit and corruption. How can Parliament do it when the majority is made up of the very same people who sit in silence while criminality flourishes on their watch?

“Mr Zuma please leave baba. You do not belong here, you are a delinquent!” – @MbuyiseniNdlozi #SONA2017

5. How is it okay to waste money on SONA when so many South Africans still donâ€™t have basic necessities?

Lots of people commented on what the big names in Parliament were wearing, but it was summed up for us in one comment: â€œIf a journalist asks a politician â€˜What are you wearing?â€™, their rightful answer should be â€˜All your taxes, honeyâ€™.â€

Approximately R4 million was spent on preparations for the event, withÂ R204, 000 alone spent on the presence of the SANDF and other security forces alone. How many students could that have funded? Or social grants allocated? For what, ne? A 21 gun salute and a scuffle with journalists? Tsek.

Minimum wage at R3500? Politicians are wearing outfits at #SONA2017 that cost more than that.ðŸ¤”