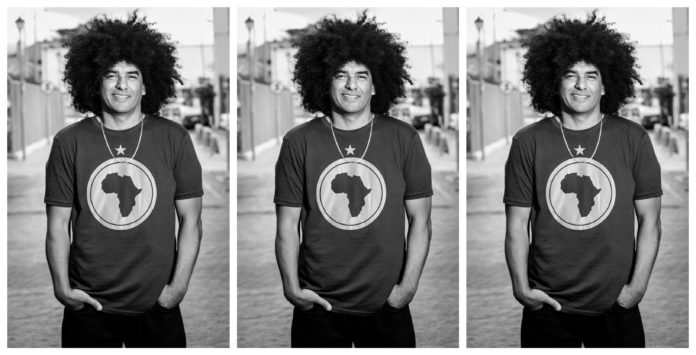 Emile Jansen is a pioneer of South African hip hop culture. Jansen is an artist, activist and now author of a book on the African origins of hip hop. He is also one of the editors of the first ever Afrikaaps dictionary. The Daily Vox spoke to him to find out more about his work.

While Jansen was working on a book called Neva Again, he got the idea for the dictionary. Neva Again covered decades of work on hip hop culture and activism in South Africa. He collaborated with Quentin Williams, Adam Haupt and H Samy Ali on Neva Again. Through working on the latter, he kept thinking it would be jas to put together a dictionary on Afrikaaps. The core idea behind it was to decolonise language.

Jansen said Afrikaaps was stolen by making a bible and a dictionary. Reclamation of it would take place at these starting points. Every single source that has been written in Afrikaaps will be eligible for inclusion. Every book that had some reference to Afrikaaps has already been collected. People have already reached out from all over the country to get involved. There are many words, sayings and variations of spelling. This dictionary will not be the final story, said Jansen.

Politicking around identity: Afrikaans holds many truths and evils

“It will be a working document. This will be an ongoing process. Over time we can keep adding and bringing out new editions,” said Jansen. He said it has been a lesson in self-awareness when transcribing rap lyrics for example. There is no reference point at all because nothing had been recorded this way before.

“When we speak, we don’t really take note. We just talk.You never think of it as a legitimate language. There is going to be a mind shift change. You know, it’s not just about the dictionary, it’s about people stepping into their identity more,” Jansen said.

The dictionary will pull from many existing sources. The Islamic/Afrikaaps collections as well as  Griekwa/Afrikaaps records have already been added to the process. Jansen said the idea behind the dictionary was always communication. The dictionary is not about dictating how to spell and say things. The intention of the language is so that you can understand it, Jansen said. This in itself is decolonising, and not holding people to Western standards.The dictionary will also display the roots of words, he said.

“RECONNECT THE STRING: The African Origins of Hip Hop Culture and its Ancestral Healing Power

His other book, Reconnect the string, released in April 2021. It began with Jansen writing a different text. He was in the process of editing a chapter for a book and then realised that it could be a book on its own. Through Reconnect the string, he started expanding on the ideas. With the Olympic breakthrough he could see  there was more intention in elevating hip hop culture. Breakdancing is a street dance that originated in African-American communities living in New York in the early 1970s. It has also become an Olympic sport for the 2024 games. The book explains various lessons Jansen learned in the last 27 years of being involved in Hip Hop Culture. It exposes the First Nation/African origin of the culture through showing parallels of expression.

“I saw a trend worldwide of people saying hip hop started from nothing. It worked on my gat. It means that you take away from the heritage that brought about this creation,” Jansen said.

His book draws parallels between what African Americans created in the South Bronx of New York and what was created on the African continent. The memory of their ancestry was embedded in them.

“When they made a circle, clapped their hands and made cyclic chants, it was African in origin. The practice of breakdancing and graffiti art too. It’s a circle and repetition like beatboxing. All the first-nation elements of expression are present in Hip Hop,and its effects,” Jansen said.

“Hip hop taught us to love ourselves.To step into the circle”

Academics extract information from communities and put it in an academic context. They “mine” our ideas and they get the doctorates, Jansen said. He explained communities like the Cape Flats never benefit from academic discourse .The content from these communities are never shared. Jansen finds the not sharing of findings problematic and exclusionary.

“They don’t even bring back the thesis to the very people they studied. There is no sense of responsibility. There is also the assumption the people won’t understand. It is very condescending too,” said Jansen.

Dr Simone Peters is an academic who identifies as coloured, and grew up on the Cape Flats. Peters found that white academics tend to give a narrow view when studying communities they do not belong to. She challenged this by showing a variety of narratives in her research study of a coloured community.  “We need an upward mobility of coloured people into academia, so that we can write about our communities,” said Peters.

Some of the other work Jansen has been involved with is the Heal the Hood Project. Jansen founded the project in 1998. As part of the Black Noise hip hop crew, the project evolved into a fully fledged non-profit organisation (NPO) ten years later. Black Noise is South Africa’s oldest hip hop crew founded in 1988 on the Cape Flats. Black Noise was involved in youth development initiatives very early on. The community work Jansen was doing with Black Noise got channeled into the NPO. The crew and organisation’s ethos is to put back into communities.

Jansen said the project is subject to many academic studies from the West. He decided some time ago they need to be intentional about being paid for documenting their culture. The Creators was a 2011 documentary about the lives of diverse South African artists. It was directed by South Africans with the assistance of an American academic, Laura Gamse. Jansen and the project’s activities in communities were profiled in it.

“It is literally a battle between academic folks and practitioners of the culture like us. They are visitors really,” said Jansen.

Copies of Jansen’s books are available to purchase directly from him.