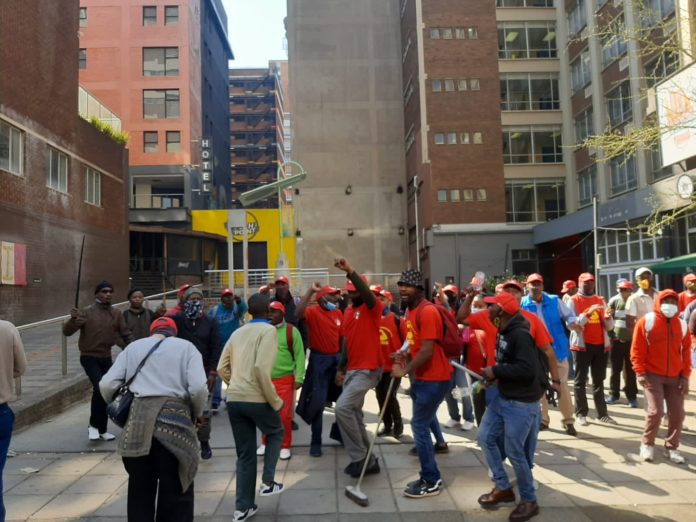 Since September 1, South Point staff have been on strike. Workers are demanding that the student accommodation company meet their demands before they return to work. Over a month since the strike began, workers are still taking to the streets. Workers are in negotiation with South Point but a resolution is yet to be reached.

After around eight weeks of striking, the South Point staff have reached an agreement with the company. Workers eventually settled on a 5% wage increase, change room facilities, professional development training and for current employees to be considered first when positions in the company become vacant.

The coronavirus pandemic led to South Point cutting down on the number of shifts workers could cover. This resulted in cleaning staff, maintenance crews, and shop stewards having their working hours reduced. Prior to the strike, some workers were earning R2 000 per month.

On September 1, members of the General Industrial Workers Union of South Africa (GIWUSA) presented their demands to management. Amongst their demands were that workers get a R12 500 salary increase along with housing and transport allowances. GIWUSA are also demanding that South Point contribute to their medical aid and must be given a thirteenth cheque. Workers also want cleaning staff to be insourced.

Following a series of negotiations, these demands were rejected by South Point. The corporation has deemed the demands unaffordable. According to South Point, this will cost the company approximately R20 000 per worker.

According to workers, these provisions are insufficient. They are determined to continue striking until all their demands are met by South Point.

In 2021, the Braamfontein Community Forum (BCF) was established. It sought to assist workers during the strike. GIWUSA, the Workers & Socialist Party (WASP), and the Socialist Youth Movement (SYM) are all affiliated to the BCF.

The BCF has called for South Point to consider and meet the demands of striking workers. “You can only treat your workers as subhuman and pay them poverty wages for so long before they organise and resist,” said Raees Noorbhai, SYM coordinator, told The Daily Vox. “The strike is the beginning of an inevitable reckoning for South Point.”

#AccommodationIsLand: “We Are All Here Because We Are Black And Landless”

Over a month into the strike, Mametlwe Sebei, president of GIWUSA, said that “now is not the time to be scaling down.” He encouraged workers to intensify their efforts and must not shy away from the struggle. “The demonstrations of workers keep the strike alive,” he said.

SYM campaign co-ordinator and WASP member, Zaki Mamdoo, addressed the crowd on 14 October and said that a coalition must be built. “We must build a united front and form real solidarity,” he explained.

Wits, along with the National Student Financial Aid Scheme (NSFAS), have agreements with South Point. Many Wits students stay in South Point residences in Braamfontein. The striking workers have called on the university to intervene.

Striking workers and students marched to the gates of Wits on September 30 but were not granted entrance. They then marched to the University of Johannesburg (UJ) where they handed over a memorandum to university management.

Where do workers go from here?

Having called on South Point to hear them out for over a month, workers will still continue striking until their demands are met. Neither Wits nor UJ have taken definitive stances on the strike. The BCF, however, is determined to assist the striking workers in any way they can. Donations are currently being collected to provide workers with necessities. This includes transport from their homes to Braamfontein so that the strike can continue.