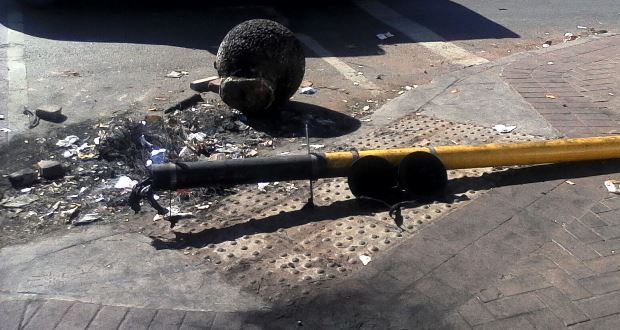 Earlier this month, residents of Dobsonville in Soweto took to the streets to protest against protracted power cuts in the area over the non-payment of electricity bills and their refusal to use the new prepaid electrical meters installed by Eskom.

The struggle over electricity in Soweto is now in its fourth month, after Eskom announced in May that it would cut electricity if residents refused to install the prepaid meters. The community says they simply cannot afford to pay for power and the prepaid meters would keep them in the dark.Â MANDLA NYAQELA spoke to two residents about the power struggles in the community. Matthew Thekiso, 44, unemployed, Dobsonville
I was part of the protest [that took place] and I’m also part of the community delegation for the meetings that have been taking placeÂ between us, the ward councillor and Eskom.

We were protesting because of the ongoing and recurring problem that concerns electricity. We have not been having electricity at all for almost two weeks now; Â neighbouring communities do have electricity, but we do not.

We have engaged our ward councillor concerning the issue, but we still do not have lights. Children are going to school wearing uniforms that are not ironed.Â We’re living as people who stay in the rural areas, but being in an urban area – we’re cooking outside; we make a fire to be able to cook.

This problem has been happening for the past six years, however, it’s worse now.

Eskom is imposing prepaid meters on us without having consulted with us to find out if we will be able to afford it. We are still waiting on them to attend to our issue. We approached our ward councillor who, with a very unfriendly attitude, told us that the situation was not his problem because the people around this community do not want to accept the new prepaid electricity meters.

We have been engaging the ward councillor on the matter, however he has always turned a deaf ear to us. That’s the reason why the young people in this ward started vandalising municipal properties such as the street traffic lights and so forth.

They keep telling us lies and making empty promises, especially when its time to vote.

Most of these households survive from our pension grants and many of our kids are not employed, so where is the money to pay for the electricity from these new meters going to come from? We don’t want these new prepaid electricity meters. We want electricity back into our households.

Update: On Monday 10 August 2015, Brian Molefe, acting CEO of Eskom told SAFM that the parastatal was negotiating with civic organisations in Soweto “about what we are going to do with the arrears.”

“The solution to the arrears really, in my humble opinion, is prepaid because with prepaid people can buy electricity of R5 or R10 or R20 and they can put it into the meter and they can monitor how that money is being spent,” he said.

This power struggle is nowhere near over just yet.