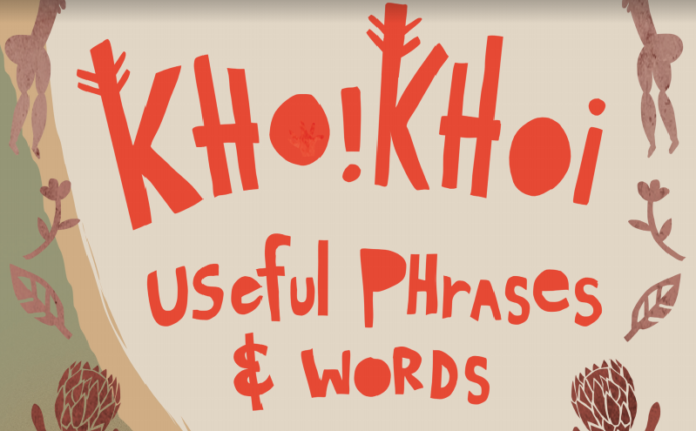 Some people may consider KhoiKhoi a forgotten language – but in reality, it’s used across South Africa every day. Words like dagga (“cannabis”), and kak (slang for “feces” or “rubbish”) and eina (when crying out in pain) are all KhoiKhoi. The language also has also influenced several place names: karoo (“dry place”) is one; others include Knysna and Goudini. And the language features on South Africa’s coat of arms.

There are around 250 000 first language KhoiKhoi speakers in Namibia, and around 10 000 in South Africa according to rough estimates. The KhoiKhoi language is what’s called an origin language: one that has influenced other languages, in this case Afrikaans and isiXhosa among them. KhoiKhoi is known for its clicking sounds. The use of click consonants spread through contact with a number of Nguni languages such as isiXhosa, isiZulu and isiSotho in South Africa.

Read more: Geralt Cloete on using the arts to honour his heritage

Now South Africa has its first KhoiKhoi reader. It was a labour of love by Toroxa Denver, a First Nation KhoiKhoi person who undertook to honour their (Toroxa Denver uses they/them pronouns) Abogan, or ancestors, by compiling the reader. They say: “We must recognise Khoikhoi First Nation communities in South Africa, stripped of our languages, a gross human rights violation unacknowledged in South Africa; a people forced to exist in the languages of our colonisers.”

Toroxa Denver started teaching themselves KhoiKhoi a few years ago. They have also been taught by KhoiKhoi speaking communities in Namibia, members of whom shared words via Whatsapp voice notes.

You can also learn a bit of KhoiKhoi — first with our short guide, and then by getting your hands on a copy of the reader. To start with, let’s cover the clicks.

The four KhoiKhoi clicks are: ?-x a dental click , ?-q and alveolar click, ?-c a lateral click, and  ?-v a palatal click. This refers to the parts of the mouth where you perform the clicks. The symbols on the right hand side are the Namibian notations. This is how the clicks are written in South Africa. It may seem daunting at first, but check out this video to get you started.

Here are some useful phrases:

Tawedes: a universal greeting that can be used at any time of the day

Resources like the reader are hugely important, especially for a language that isn’t recognised as a mother tongue, listed among the country’s official languages, or taught in schools. There are also very few digital resources related to the language (though there is a beginner KhoiKhoi app available on the Play Store – Toroxa Denver wasn’t involved in creating this, but urges people to support it, too).

Apart from Toroxa Denver’s work, the KhoiKhoi Language Reader was made possible with the help of Cultural Survival, a US-based agency, and funding from the National Arts Council of South Africa. Kare, or praise, is also due to several individuals: Ms Fredricka Vogelsang, Mr Paul Vogelsang, Ms Maria Uazukuani, Ms Delri Stoffel and Ms Wilhelmina Goeieman. Toroxa Denver plans to have thousands of copies printed and to distribute these to KhoiKhoi communities across South Africa. The reader will also be available online soon via online shopping portals.

The injustices of coloniality and apartheid on South Africans has had lasting effects on heritage and culture. But we can turn the tide by supporting our ancestral languages. KhoiKhoi gave the world mama (ma in Khoekhoe means to “give”) and the word haka (a dance). The udawa (“reclamation”) of Khoikhoi is equally important for our continent: it’s a language rich with African stories and histories. After all, Africa will voaga (“rise”) when her languages – especially her Xgusi gobab (“mother language”) – do.