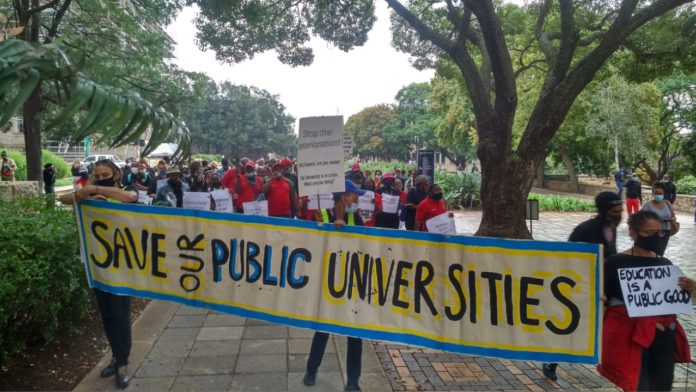 There seems to be a lull in student protest action across South Africa – but the issues that sparked this year’s protests persist.  Many students, for instance, say they still haven’t received their funding from the National Student Financial Aid Scheme (NSFAS), despite some universities putting out statements that suggest the contrary. Here’s what has been happening in higher education.

Yesterday more than 5000 prospective students turned up at DUT campus to register. This was as a result of a hoax message doing the rounds that invited “walk-ins’ to register. DUT management has temporarily suspended on-campus registration. Following more violent outbursts today DUT has closed all five campuses till further notice.

University of the Free-State (UFS)

UFS held its SRC elections recently, with little fanfare. It was a clean sweep for the EFFSC (Economic Freedom Fighters Students Command), which secured 5000 of the 7000 votes cast.

CUT had its virtual orientation for first year students on 6 April.

Read more: How the university funding crisis played out this week

But some CUT students are still waiting for their NSFAS funding. Without this, their food and housing allowances are unpaid and they cannot register.

In March, the South African Union of Students (SAUS) called for a national shutdown. This was in response to the many issues facing university students, including historical debt, registration fees and the missing middle. A few public universities joined the protests; others, like the Tshwane University of Technology (TUT), opted to complete the 2020 academic year. At the end of March, SAUS announced that the shutdown would end with immediate effect. SAUS said it had held many stakeholder engagements with the Minister of Higher Education, the Public Protector and the South African Human Rights Commission to table students’ demands. Many of their demands were addressed, they said, including NSFAS funding for first-year students.

Wits academics in support of students

On April 1 the Academic Staff Association of Wits University (ASAWU) organised a march in solidarity with students’ calls for a lasting solution to the funding crisis in the higher education sector. ASAWU said: “The funding crisis extends far beyond the problems plaguing NSFAS […] Equally important is acknowledging that the current funding crisis cannot be solved at an institutional level, and has to be addressed nationally.”

Wits University was one of the first universities to start the current cycle of protests. They were asking for students with historical debt to be allowed to register. The university’s student representative council (SRC) managed to raise R4 million to help students in urgent need of financial assistance. The SRC said they want to raise R21 million in 2021 for students in need.

Comprehensive plan for funding coming up

Higher education minister Blade Nzimande is due to present a comprehensive proposal to the cabinet on how to tackle funding of university students in June. This is what Nzimande told parliament’s portfolio committee on higher education at the end of March. Nzimande is set to put together a team to research all these issues and then compile the proposal.

The proposal’s main focus will be on funding for the missing middle and those with historic debt.