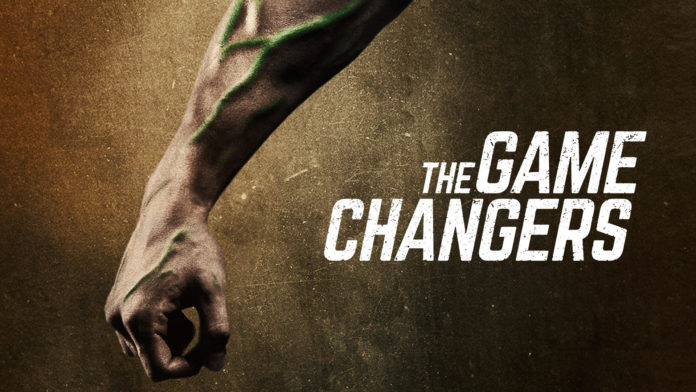 Nothing says ‘manly’ quite like a nice piece of rare, bloody steak, amiright? Actually, you may be wrong according to a new documentary on Netflix called The Game Changers. Traditional constructions of masculinity say a ‘real man’ is physical, powerful, unemotional, entitled to respect, and sexual. The Game Changers appeals to traditional masculinities and assures viewers that ‘real men’ eat plants.

Directed by Oscar-winning director Louie Psihoyos, the documentary was originally released in June but is now streaming on Netflix. It focuses on the misconceptions around eating meat to support physical prowess in sport. Boasting Arnold Schwarzenegger, Jackie Chan and Lewis Hamilton as executive producers, it has the backing of heavyweights in the industry. (Hamilton’s own consistency is a bit dodgy, but let’s move on).

“Ima keep runnin and runnin, I’m a champion,” Moosh and Twist sing in the opening threads of The Game Changers. Then, viewers meet James Wilks who is exploring a plant-based lifestyle to speed the recovery of a major knee injury. Wilks, a self-defense trainer and ex-mixed martial arts competitor, takes viewers on his personal journey discovering the athletic, medicinal, sexual, and environmental advantages to a plant-based diet.

Did you know that the gladiators were predominantly vegan?

In his research, Wilks discovers that the Roman gladiators were predominantly vegetarian. Information that professional fighters, the epitome of traditional masculinity, ate mainly plants goes against everything he’s taught about nutrition. Further digging shows how many pro-fighters follow a plant-based lifestyle and are just as strong, if not stronger than their meat-eating competitors.

In a scene about the one of the most anticipated fights between world champion fighter Connor McGregor and Nate Diaz in 2016, meat became the focal point. Diaz, who follows a predominantly vegan diet, was taunted by McGregor, who was a big meat eater. McGregor compared himself to a lion that would feast off of Diaz, whom he compared to a gazelle. In the three fights between the two, both have won a match each. The other match was cancelled.

Besides athlete interviews, the film features cool graphics and expertise from physicians, professors, scientists about the benefits of plants. The doccie is also peppered with small experiments showing the effects plant-based diets had on the quality of athletes’ blood and their endurance on the field or in the gym. These studies even tested athletes’ erections…

Lead delegate of the American Urological Association Dr Aaron Spitz conducted the study. He said: “When I think of a manly man, I think of someone who has strength, endurance, sexual prowess and fertility. In fact, what the scientific studies are showing, is that the more meat men eat, the more quickly they lose their… manly manhood.”

It wasn’t a terribly scientific study. Using a pair of rings that went on the base and the tip of the penis during the night, Spitz measured the strength, longevity and number of the athletes’ erections over two nights. The athletes were in fits of giggles over their results. Basically, they all experienced an increase in the strength of their penises, how long they experienced erections, and the hardness of their penises. It’s all quite amusing and the three vow to take their dates to Veggie Grill instead of for a steak on Valentines Day.

The Game Changers appeals to a new market

Often vegan documentaries are slammed for forcing images of slaughterhouses down viewers throats. Health studies promoting plant-based lifestyles are countered by alternative studies, often covertly funded by the meat and dairy industry. But in my experience as a vegan, the most resistance to a plant-based diet comes from men. Men who are athletes and gym rats are worse.

You have to applaud the meat industry for the way it sold the idea that ‘real men’ eat meat. The idea is pervasive even today. And considering how fragile masculinity is, it isn’t difficult to believe that men will resist eating plants because it threatens their masculinity. But The Game Changers appeals to those with traditional ideas about masculinity and urges them to rethink their aversion to veggies.

My own gripes with appealing to traditional masculinities aside, the film provided some interesting medical and scientific research. It also helpfully covered the vast ecological benefit to reducing animal consumption.
Of course, it’s going to have it’s naysayers. Medical science is not an exact science. But it’s all part of the fun really.