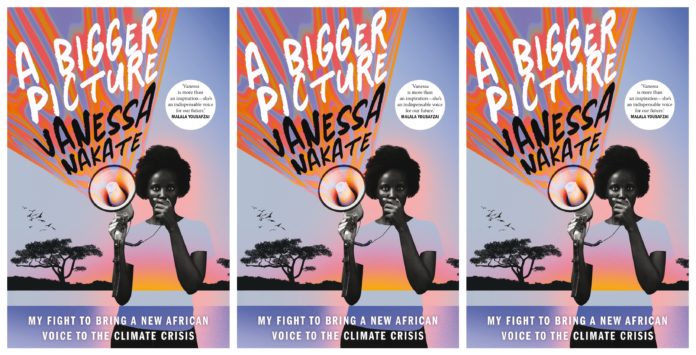 Vanessa Nakate is writing her story for herself and for thousands of other young people on the African continent. In A Bigger Picture, Nakate explains how she started her climate activism journey and all the lessons she learnt. The book is a clear message and guide about what needs to be done to achieve climate justice.

In 2019, Nakate was interviewed in The Daily Vox. At the time, Nakate was raising awareness about the Congo rainforest. She said there was global concern for the Amazon rainforest. However, there wasn’t a lot of attention around the forests on the African continent. It is for that reason that she went and found out more about the Congo rainforest. She said it was important in the spirit of creating a fair and just climate action.

This is something that has always guided Nakate’s activism as she explains in the book. When she first learnt about climate change and its effects, she was passionate about rooting it in her real-life experiences. She saw the effects of flooding and other natural disasters in her country on Uganda. For Nakate and many others living in the so-called Global South, the effects of climate change are not abstract. Instead, the effects are their lived realities.

In her book, Nakate outlines all of this. She explains how she started weekly climate strikes by herself outside shopping malls and the Ugandan parliament. Slowly, the strikes grew and she received international recognition for the work she was doing. She also managed to connect with other climate activists from Uganda, across the continent and around the world.

With all that recognition, Nakate writes she realised the problem of climate change was not just a single issue. She writes powerfully and heartbreakingly about the incident that gained her global acknowledgment. In January 2020, during the World Economic Forum, a picture was taken of Nakate with four white activists including Greta Thunberg. When the picture appeared online, Nakate was the only one cropped out.

There was a global outcry on social media and Associated Press later apologised. However, Nakate writes she realised that they didn’t just crop her out of the picture. She felt they were erasing climate activists across the continent who were trying to show that climate change is an African issue.

The entire book is rooted in that idea. Nakate speaks about the work she is doing in her country to mitigate the effects of climate change. She has started a Green Schools Project and the Rise Up Movement in Uganda. In the book, she brings in interviews she did with activists from across the continent and “Global South” about their experiences and work. It is all deliberate to show that while activists from the “Global North” are recognised and their work celebrated, at the end of the day it is people living in the “Global South” who will face the worst effects.

It is as Nakate puts it: “those with fewest resources and who’ve contributed the least to the crisis are contending with the gravest consequences”. Besides outlining her activism journey and work, Nakate also puts out a message. She, along with the activists she spoke to, want the international community to support and amplify their work. After all, for Nakate and her fellow activists, climate change is not a theory, it is part of the daily lives in their communities.

The book is also incredible because it shows the challenges Nakate had to face along with her growth. Initially, when she started her strikes, she had to contend with what society would say about her as a woman protesting on the street. There were also the real concerns of being arrested by the police and government if they saw her protests as being anti-government. She mentions that several of her friends in Uganda, and in other countries were arrested by their governments for their climate actions. However, Nakate overcame all her fears and now calls out her government, other governments and the international community for their failures.

All of this is to paint a vivid picture of the challenges activists in the “Global South” face in their climate activism. They are erased from the global activist movement, they are sidelined from the important conversations on the international stage and they face harassment in their home countries.

The book is not all doom and gloom though. While the climate crisis seems overwhelming at times and like there is nothing individuals can do, Nakate disputes that. She ends the book with ten simple ways young people and people of all ages can stand up for what is right and just. She says her story is a motivation that no matter where you are or who you are, “what matters is that you begin and do something”.

After all Nakate raising her voice and starting the small climate strike in Kampala has led to her amplifying the continent on the global stage.