Home Reporters' Notebooks “We will stay here anyway, we have nowhere else to go.â€
WhatsApp
Facebook
Twitter
Email
Print 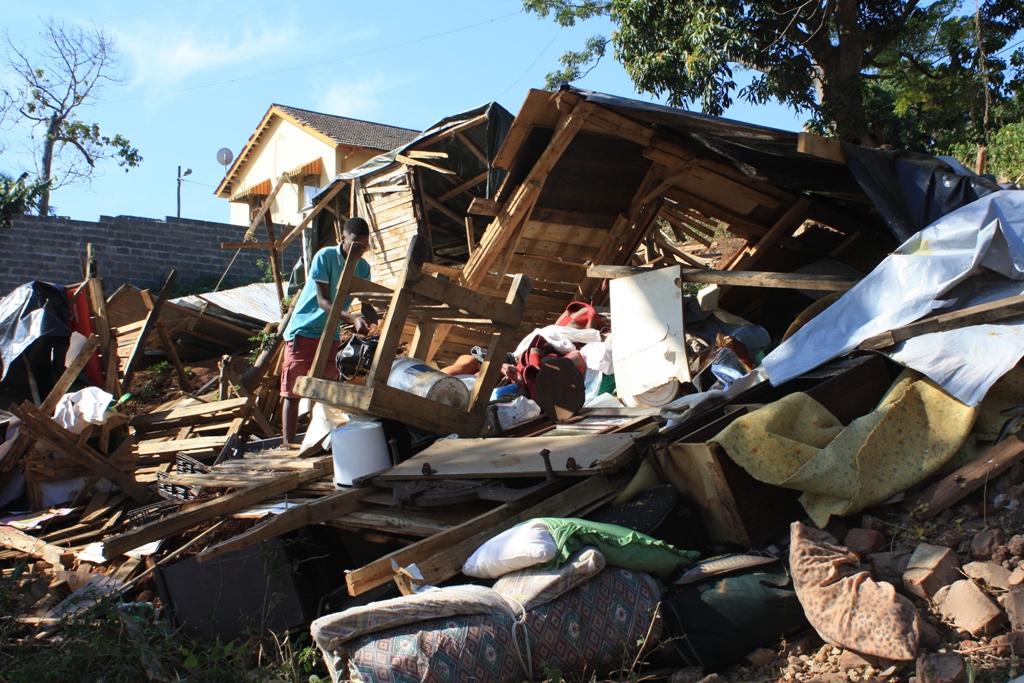 On Sunday the eThekweni MunicipalityÂ destroyed dozens of homes in Cato Crest, which it said had been built illegally on land earmarked for housing. RUMANA AKOOB was there.

Durbanâ€™s shack dwellers live in constant fear. Evictions have become a common phenomenon in Durban and around the country. Â On Sunday morning the eThekweni Municipality destroyed 48 informal dwellings in the Cato Crest settlement.

According to the 101 ward councillor, Nzimuni Ngiba, the municipality broke down these homes because their inhabitants were illegally occupying land that would be used for housing.

As I arrived at Cato Crest, the protest had just become violent. Enraged residents had thrown rubbish onto the street. Burnt tyres blocked off the road next to the Jan Smuts highway. The settlement that was destroyed was just out of view of drivers who shook their heads at the protest and moved on, past the mansions that stand just a half a kilometre away from the devastation. Within minutes of my arrival, a community whose homes had just been brought to the ground where also under attack. Tear gas was thrown into the crowd of protesters and a stun grenade went off next to me. The police ran through the settlement close by and a moustached policeman bellowed, â€œSend your members through!â€

The scene was something youâ€™d expect to have happened during apartheid, not 20 years after democracy.

Going against policemenâ€™s requests for me to stay behind them I walked through the settlement to meet a community member who was too afraid to come close to the road again. â€œYouâ€™re going to get hurt, these people are dangerous,â€ a policeman carrying a gun warned me.

But the residents told me the police had it wrong. â€œIf we try to stop them from breaking down our houses they threaten to kill us,â€ Mzamo Majozi told me.

â€œThey come and break down our homes and when we build them up again they come again,â€ said Mpindelo Mahlwanthi, a Cato Crest resident who told me his shack has been broken down three times already this year.

I walked over slanting trees used as bridges above streams, over iron sheeting that used to be roofing, and found myself next to a young mother. She carried her year-old baby and told me in a trembling voice that she could not afford new materials to build with and that sheâ€™d have to sleep out in the cold.

The municipality had provided no alternative shelter.

Dumsani Ndlovou from the eThekweni Municipalityâ€™s human settlements unit told me that when they go in to do an eviction, because of the cost to remove materials, they â€œwork hard on destroying them so they become worthless.â€ Around me, people were fighting against the gathering darkness to salvage as much as they could and rebuild.

School books littered the ground. Two dusty, stuffed toys lying beneath a fallen wall caught my eye. It struck a chord. Despite reporting on a similar incident earlier this year, you can never hide from the pain your fellow South Africans live through.

Majozi said that it was hard to live in their conditions. â€œThey said they will come back tomorrow but we will stay here anyway, we have nowhere else to go.â€