Home As Told to Xenophobia: â€œThe government can say they will fix it, but that is...
WhatsApp
Facebook
Twitter
Email
Print 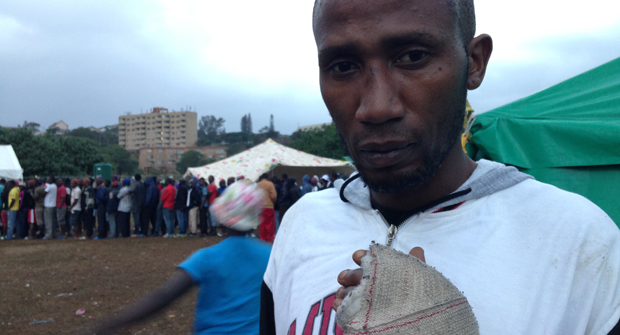 THARCISSE BWAMI, 35,Â from the Democratic Republic of Congo has been in South Africa for nine years. His journey south was long and hard, but he persevered because he believed he could make a life here. After the xenophobic attacks in Durban, which left him with stitches on his head and broken fingers, heâ€™s changed his mind. Bwami spoke to The Daily Vox about why he wants to leave.

I was staying in Umlazi and I was attacked on the 10th of April at around half nine at night. I saw a group of more than 20 people coming to my place. They broke the door and started beating me with stones and sticks.

One of my neighbors from Ethiopia was shot with a gun. I went with him to the hospital and by the time I got back home on Sunday, I found that they had taken everything from my home and shop.

Some of my neighbours advised and asked why did I came back because those â€œnaughty boysâ€ would come back. They said I should find somewhere to go and that is why I came to the camp, because in the community it is not safe.

I arrived in South Africa in 2006, passing through Burundi, Tanzania and Zambia and Zimbabwe after which I came here to South Africa. I travelled the whole route because I learnt a lot about East Africa in school and I knew that South Africa was the best country in Africa and the most peaceful. I didnâ€™t know that something like xenophobia could be in South Africa.

I did experience a little xenophobia in 2008 in Johannesburg, but it was not as terrible as it was this time. This time many people died and many businesses owned by foreigners were destroyed.

I was very surprised to see the things that I saw here.

I will try to go to the UNHCR offices and explain to them and ask them if they can please find another country that will take me that is not South Africa.

I donâ€™t want to remain in South Africa and reintegrate with the community because my life is at risk here.

I donâ€™t think they can give us 24-hour soldier protection to look after us. When the people were attacking us that time and people called the police, the police didnâ€™t come. Why do they then say that this time they will come? I think they canâ€™t help us.

– As told to Al Jazeera English.