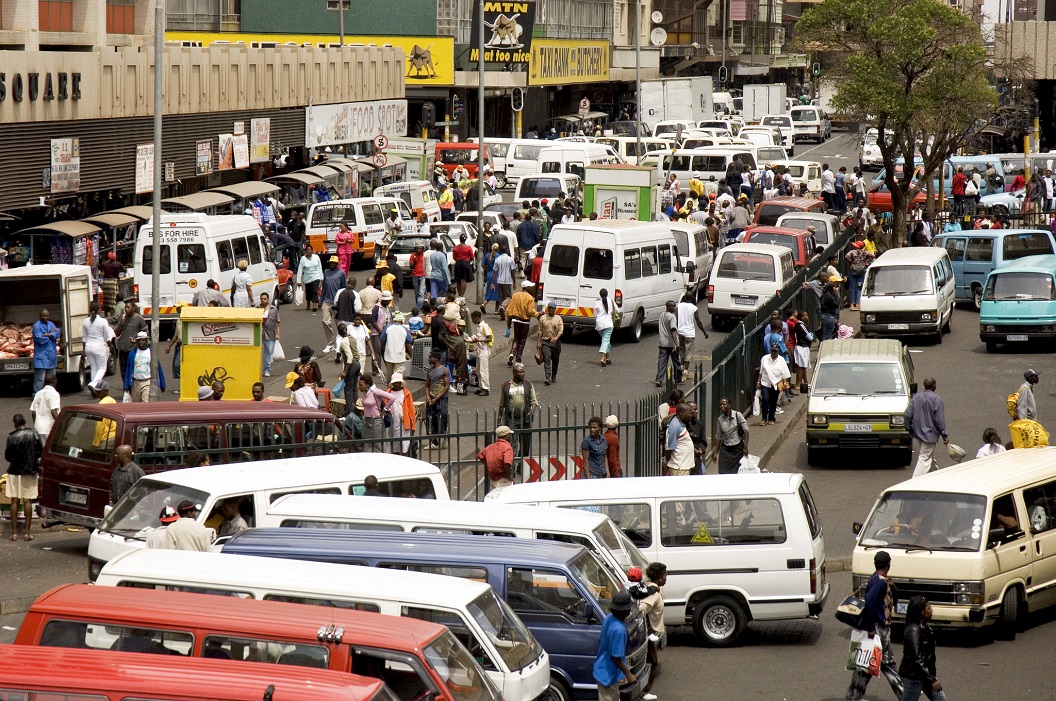 The conductors in the taxi ranks in the Durban CBD taxis are popular for their energetic calls to passengers, especially the phrase “Yahamba Mfethu”, which loosely translates to “Are you boarding, my brother?” But since the South Beach & North Beach Taxi Association recently ruled to end the system of conductors, loud music, weekend rush and car hooters is all that lingers on a weekend in the city centre. Lizeka Maduna spent the day on a weekend driving around the city with one of the drivers.

Walking through the usually-lively West and Russell Streets, one is welcomed by pedestrians, hairdressers’ chatter and seemingly busy taxi rank marshals. On November 1, the association dismissed all the conductors who frequented the CBD’s busy streets, luring clients for a ride. This came after numerous complaints from the commuters of criminal activities and “unhygienic” conductors.

Running around the popular stop between West and Russell Street on a scorching hot day, a taxi rank marshal is between calling for passengers, opening the door of three taxis at the same time and attending to those (drivers) who want to be next in line. In just ten minutes standing at this stop, over ten South and North Beach taxis pass. I couldn’t help but wonder, how many taxi conductors have become jobless, and how much pressure does this marshal now have to work under?

Generally speaking, a conductor helps the driver manage the passengers, including finding new ones in the rank and on the route. These conductors were employed by individual drivers, and this often resulted in rivalries, as conductors would fight each other at ranks over passengers. Having got rid of them, the associations replaced them with marshals, who do not work for any individual driver, but for all them.

While some commuters have expressed relief over the decision, many of these conductors will lose their only source of income, which some rely on to support their families. South Africa has a serious youth unemployment problem, and many have to resort to conducting in taxi ranks to make ends meet.

The Ten Commandments Of Catching A Taxi

One conductor who commented on the association’s Facebook post pleaded with them not to dismiss them, as this would be taking a bread out of their mouth. He said: “I am a South and North Beach Taxi Association conductor and I’m just saying can you please bring is back because some conductors feed their families with this money.”

Spending a day with a South Beach taxi driver Sandile*, I began to realise and appreciate the work of conductors. Taxi math is not an easy one.

The issue of disrespectful and unreliable taxi conductors has been raised numerous times by commuters, and some have alleged that the drivers hire drug addicts.

One North Beach driver interviewed by The Daily Vox confirmed this, saying it was convenient to work with a whoonga addict in terms of cost. (Whoonga, also known as nyaope, is very low-grade heroin, usually cut in with other substances.)

“On average a conductor earns R 300 a day, but with these whoonga boys you can just give them a R 100 for a fix and they can work an entire day without asking for more money,” he said.

Although commuters have complained a number of times about disrespectful and aggressive conductors who forcefully try to convince them to take a taxi, Majola says that for one to have a good working day with the conductor, they need to ensure that they give them a fix of whoonga before they begin working.

“Once they’ve smoked they become energetic and work without any complaints,” he said.

Festive season is nearing and this is the time conductors really come in handy for both the drivers and commuters. Having to call for passengers to catch ride while counting change might be a headache for these drivers, who will now be forced to multitask while paying attention to the season’s traffic. But, this is not the case for Sandile. He seems to have a good relationship with commuters, most of them know him by name.

He says he’s been a south beach taxi driver for over four years now and have been able to work without the help of a conductor.

“I can count the money myself and I’ve been doing it for years,” he says.

He adds that although this will take a toll on conductors, especially his who he has had a good working relationship with, dismissal of conductors is a good thing.

“The association had seen an influx of conductors, including the unreliable drug users who have no regard for their work and our clients. Even some drivers had started getting involved in shady dealings, where you’d find that passengers get robbed on board and they don’t do anything about it, giving us all a bad name.”

“Also, these conductors had no respect for passengers’ choices when it comes to taxis. They would try and force them to board taxis even when they don’t want to, in extreme cases passengers ended up being insulted or physically handled. It was against what I believe in as a service provider,” said Sandile.

With the association’s decision to dismiss conductors, notoriously famous for criminal activities Centerville Rank, in the market is bursting at seams with the dismissed conductors. Most of them, being the squalid bunch that everyone complains about.