Home The Street Young Durbanites on Mandela: â€œIf It Weren’t For Him, We Wouldn’t Be...
WhatsApp
Facebook
Twitter
Email
Print

July 18 this year will mark the 100th birthday of South Africaâ€™s late icon and former president Nelson Mandela. The Daily Vox spoke to young people in Durban to find out what positive role the icon played in their lives, and this is what they had to say. Nelson Mandela was a hero, that’s what we’ve been told since we were growing up and I believe so. The mere fact that when he was released from prison he was able to unite people and instill the idea of a rainbow nation was great. He had power to tell the people to avenge themselves but instead he encouraged peace – he brought people of different races together. As a young black South African, today I have access to quality education because he fought for us.

Nelson Mandela is an internationally acclaimed icon and is renowned for his revolutionary activism against the apartheid. Following his release from prison in 1990, South African people have regarded him a hero who fought a winning fight against prejudices that were faced by black people during the apartheid era. If there’s one thing Nelson Mandela taught us itâ€™s unity. He brought this nation together and today we are able to share same spaces as white people, we’re able to be at schools and get educated. He’s an icon. Although there are things which I feel strongly that he didn’t do enough, I still see him as a hero. As a young black African woman I still don’t feel as free as I should be in a democratic state, where the likes of Mandela and others fought. Perhaps as much as he fought for us as a nation, some of the laws implemented during his time, especially that have to do with women’s rights, were not effectively implemented. But he did play his part and it’s now up to us.

Young People On Mandela: He Could Have Done More For Us He fought for his people and that’s why almost everyone sees him as a hero. Black children are able to go to school, we’re at universities getting education. He fought against apartheid and racism, and although he might not have fully achieved a non-racist South Africa, he did what he could. It’s now all up to us to practice the spirit of unity that he instilled in us. We are where we are today because of his sacrifices. Sacrifices were made. Nelson Mandela spent 27 years in prison and if it weren’t for him and others we wouldn’t be here today. I’ve had the privilege of being at school and end up here at varsity because of their fighting spirit. It’s written in history that he is our hero and the coming generations will know about him. He brought peace among the people. I’ve had opportunities in my life that I don’t think I would have gotten had it not been for his heroic spirit that took South Africa from an Apartheid state to a democratic one. 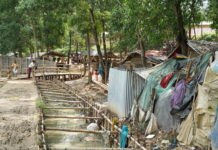 No Solutions In Sight For The Rohingya, Two Years On