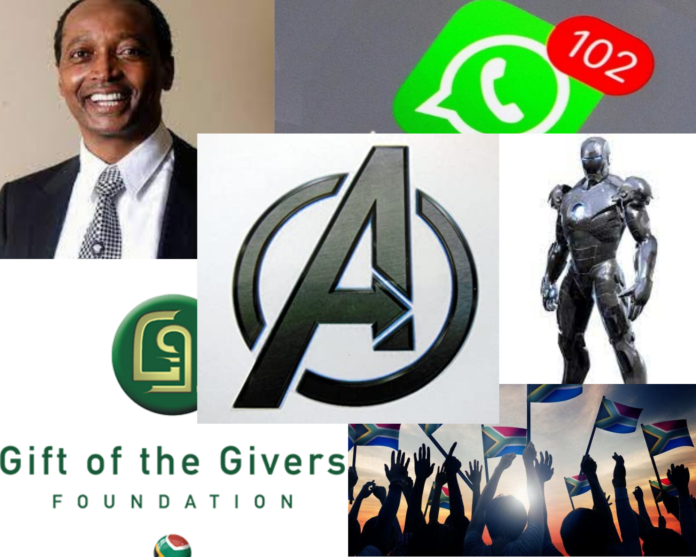 Movies and series have helped many of us to get through the pandemic, keeping us entertained and distracted. But if you pause Netflix for a moment, look up and look around, you’ll also realise that we’re living each day in a movie: on both its best and its worst days, South Africa is a summer blockbuster. Politicians are the so-called heroes who are meant to run things but instead end up fighting amongst each other and leaving a trail of destruction. Never mind them, then – let’s take a look at the all-important supporting cast and crew who all too often have to sweep in and save the day.

The Iron Man of South Africa is Patrice Motsepe.

Motsepe is not only the billionaire who brought us Beyoncé – he is also incredibly philanthropic. In 2018 he pledged to donate R3.5 billion rand towards South Africa’s land reform programme through his Motsepe Foundation. The funds will assist skills development programmes in rural communities. Often our rural areas are neglected, and this sort of investment is empowering for the landless. Following the lead of other billionaires worldwide, he also pledged half of his fortune to his foundation. Recently he donated R1 billion to fight Covid-19 in South Africa. This is what a lead actor should be; charismatic, ethical, conscious, and with a winning smile too. The real star of the show who is very low-key but always pleasantly surprises us when he does say something. In fact, let’s call Motsepe Platinum Man from now on: South Africa produces over 80% of the world’s precious metal and is a fitting name for the mining magnate.

South Africa is a constitutional democracy with a three-tier system of government.  The three parts are the Executive (the Cabinet), the Legislature (Parliament), and Judiciary (the courts). Each tier provides checks and balances on the others.

These aunties provide us with much comic relief by constantly sharing 5G conspiracies and other assorted laugh out loud “forwarded many times” messages. But let’s not be too hasty to dismiss them. Once I get a WA message I actually go and check its veracity. It keeps me on my toes. I do my own checks and balances on the latest vaccine conspiracy texts. Just like the TikTok generation, the Whatsapp Aunties keep us laughing. They also force us out of our apathy on many government issues, and that’s a great supporting character in my movie.

A film crew basically ensures the production gets made, from a technical standpoint. These are the behind-the-scenes folk making sure the best parts don’t end up on the cutting room floor. They keep the cogs in the machine running, from sound to lighting.

I wasn’t sure who should play this role: it was between our judiciary and the South African people.

The public won in the end because there would be no movie without us. We provide the cinematography (our lives) and the sound (our voices). We make governance possible, just like the visuals in a movie. We are the opening and closing credits. Government is not solely to blame for everything. We need to step up and adjust the script, too. We need to participate more and learn our lines before rehearsal. In real life that would be helping those around us where we can.

I have always been a DC fan. Superman’s chiseled jawline, the brooding Batman and Wonder Woman’s lasso all pulled me in. But the DC-verse is very solitary, made up of one-man shows, so I also watch the Marvel movies to get a different experience.

If there was ever an ensemble cast in South Africa like the Avengers it would be the Gift of the Givers.

They are my favourite NGO in South Africa. No frills, no fuss: just the work and assisting the most vulnerable people in our society; too often swooping in to do the jobs that municipalities should. For instance, Gift of the Givers drilled boreholes in just three days for villagers in the Eastern Cape – a task the municipality has not been able to do for years. Gift of the Givers are ideal cast members. They turn up at the set on time, they know all their lines and execute their scenes beautifully. They should win the Best Picture Award every year for consistency and cleaning up local government failures.

Which organisations or individuals would feature in your South Africa: The Movie cast? Let us know your casting on our social media channels. Use the hashtag #TDVSATheMovie