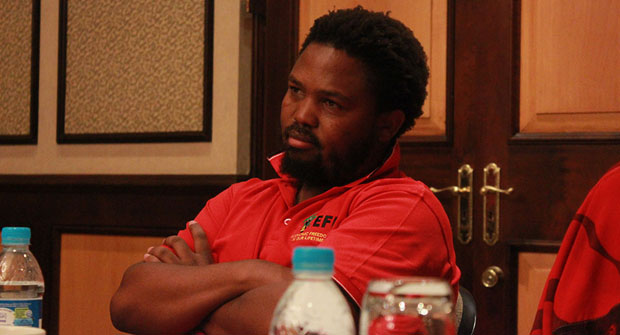 When EFF leader Julius Malema stood up in Parliament at the 2015 State of the Nation Address (Sona) and said, â€œIt is my right to speak as a member of this house,â€ his voice rung with conviction. But as Malema complained about the violence against his party at Parliament, he conveniently forgot the violence the EFFÂ had, that same day, inflicted on one of their own, writes RAâ€™EESA PATHER. A few hours before Sona, EFF MPs Andile Mngxitama and Khanyisile Litchfield-Tshabalala had arranged a press briefing to discuss the recent party infighting.

As I took my seat in a cosy conference room at the Cape Sun Hotel, a colleague turned to me and asked, â€œWhat is going on?â€ We all wanted the answer, but it wouldnâ€™t come. In that primly furnished room, Mngxitamaâ€™s fellow Fighters were out to stop him, and they were willing to spill his blood to do it.

The two MPs arrived late, looking tense and tired. At first EFF members were asked to leave. They shouted and protested until they were told they could stay. Just as Mngxitama was about to head to his podium, Bernard Joseph, the Western Cape provincial chairperson of the EFF, rose up and declared the whole event a farce.

Joseph said that Mngxitama was no longer a member of the EFFâ€™s central command team and, therefore, did not have the mandate to call a press conference. â€œWe canâ€™t allow this type of situation to happen in our organisation. We are here to defend this organisation,â€ Joseph said emphatically. Mngxitamaâ€™s supporters began to chant â€œJoseph, sit down!â€, while the pro-Malema faction tried to drown them out.

It all happened so fast. Around the room, people began dancing and singing â€“ within seconds a toyi-toyi was in full swing.

I turned away from the crowd to see Mngxitamaâ€™s reaction. Throughout the disruptions he had been quietly speaking with Litchfield-Tshabalala; occasionally, a smile-cum-grimace would break out on his face. Now he was getting up to leave. I moved closer to himÂ andÂ huddled with journalists as we asked him what he planned to say at the conference, or if another conference would be scheduled

Suddenly, I felt the crowd of journalists around me disperse, and I instinctively backed away from Mngxitama. Men in red regalia rushed forward, heading straight towards the lone Fighter. A scuffle broke out, and Mngxitamaâ€™s EFF golf shirt was ripped from his chest. He shrunk into a corner with his back tightly pressed against the wall, and two women moved in front of him, protecting him from members of his own party. Arms snaked forward, and fists punched in his direction. The women in front were immovable.

It was meant to be a press conference, but the niceties of a media address had been swallowed by this raw, brutal attack. Malema may have condemned the way in which police had callously expelled EFF MPs from the opening of Parliament, but heÂ has barely breathed a word against what his own party had done to Mngxitama. His loyalists spoke to me with pride.

â€œWhat you perceive as violence was just a demand from the leadership of the Western Cape for Andile to remove all the gear of the EFF,â€ Monwabisi Maswana, the ward 53 chairperson in the Western Cape, told me, as Mngxitama hurried away from the hotel, and ran to his car, Malema loyalists chasing after him. â€œIâ€™m very proud. We did a very good job by avoiding people from using our platform as EFF members. Enough is enough. Theyâ€™ve abused our platform for so long,â€, EFF member Napolean Webster added, as theÂ chanting continued around us.

At a press briefing on Friday, Malema heartily clarified that Mngxitama has a right to speak. The EFF comander in chief gave his EFF Western Cape leaders a dressing down for the way Mngxitama was treated. However, Malema reasoned, it was right that Mngxitamaâ€™s T-shirt was forcibly removed, because he had organised the presser to â€œinsult his own partyâ€. It has to be said that if Malema condoned Mngxitamaâ€™s T-shirt being ripped off, he condoned the violence in that room â€“ it was all part of the same action.

Parliament may be more entertaining with the EFFâ€™s presence, but if this is how the party treats its own members â€“ if they canâ€™t even admit to violence when violent intent is clear â€“ then we are in trouble.

Politicians are leaders, but Mngxitamaâ€™s press conference was a sign of the real state of the nation â€“ a nation where our leaders try to gag us, wage violence against dissent, and then complain about attacks against their person without looking in the mirror to see their own crimes reflected.

Mngxitama eventually told reporters that the press conference had been called to inform people that Malema had been in cahoots with ANC members to expel seven EFF MPs from Parliament in exchange for no disruptions during President Jacob Zumaâ€™s Sona speech.

Nevermind, the chaos in Parliament last night: the EFF â€“ Mngxitamaâ€™s own party â€“ resorted to violence when he criticised its leaders. The hypocrisies of the EFF cannot be washed away by how entertaining they are or how they are victimised in Parliament,Â not when they victimise their own members.