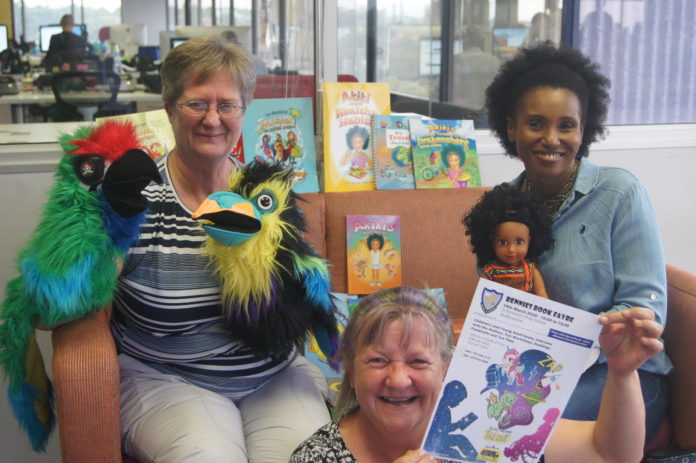 Literacy levels in South Africa have long been a cause for concern. Many children in South Africa cannot read with understanding in any language. And South Africa’s reading culture has been described as weak. The Schools Reading Road Show (SRRS) is an initiative working to change that. In March, SRRS will be hosting the inaugural Bennies Book Fayre.

The Daily Vox team set down with organisers Jann Weeratunga and Kim Hunter, and author Fatuma Abdullah to chat about the concept and what they hope to achieve.

What is the SRRS?

It is a group of authors who have come together to help address the reading problem in South Africa. Weeratunga said adults often have the opportunity to meet and interact with authors, yet children often are not given this opportunity. With the roadshow, they take children’s authors into schools. The children are given the chance to interact with the authors, listen to them read their stories, and even play with the characters (in the form of toys) from the books.

At the more funded and privileged schools, the roadshow sells the authors’ books. Using those funds, they are able to buy books for under-resourced schools to ensure that the reading culture reaches all schools. Building on the successes of the roadshows, they decided to launch a book fayre.

Why a book fayre?

The fayre will be taking place on March 14 in conjunction with the St Benedict’s Prep at the St Benedict’s College in Bedfordview. Taking place under the theme “Homegrown” the fayre hopes to give children between the ages of two and 17 the opportunity to meet local adult and child authors. Abdullah said it was important for them to use the theme homegrown because they want the children to meet the local authors. She hopes that after the learners see the authors in person it will inspire them to start reading and writing their own stories as well.

Why is the fayre so important?

Hunter said the idea for the roadshows and the fayre begin with the Progress in International Reading Literacy Study (PIRLS) 2016 report. Released in 2017, the report showed that 78% of Grade 4 learners could not read for understanding. Hunter said it was those awful statistics that caused them to question how they inspire children to read.

What makes it different?

Abdullah says the book fayre is different from others out there because they are centering children and young adults in it. She said they are opening up a whole canvas of what is out there in terms of children’s authors. This is not only in how the fayre will be carried out but also with the authors. Many of the authors who will be showcasing their children’s books are not the ones who are found in mainstream retail stores. Instead many are self-published and indie authors. The authors are also mostly writing stories that fulfill the theme of “homegrown” in that they tackle issues relevant to a South African and broader African continent audience.

When is it happening?

The fayre will showcase local authors of children’s and young adult books. There will be storytelling sessions, panel discussions, and various children’s book activities. Tickets for the event are available via Webtickets.