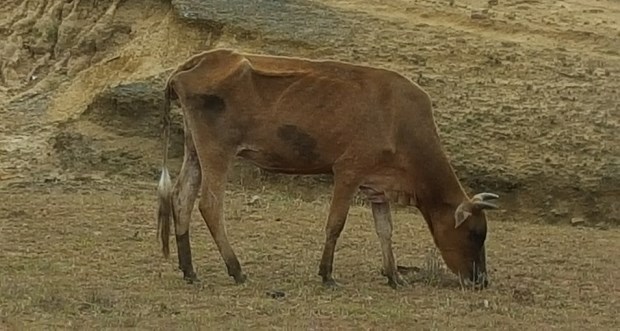 Farmers across South Africa are warning the government they might not survive the current drought gripping South Africa.

What is a drought?

Defining the particular circumstances around a drought can be difficult, the National Drought Mitigation Center looks at it conceptually and operationally. Conceptually it’s “a protracted period of deficient precipitation resulting in extensive damage to crops, and a consequential loss of yield.” The operational definition “helps define the onset, severity, and end of droughts, how a drought functions or operates.” This is the definition used to describe the proper effect and extent of the damage.

In October 2019, Agri South Africa, an agricultural industry association released its 2019/202 Agriculture Drought Report. One of the key findings from the report said: “37,44% of rural communities in South Africa are affected by drought.” Additionally, the report found that the drought conditions have affected South Africa over the past few years have “left many maize producers in the North West and parts of the Free State in a very challenging environment.”

The drought in the Western Cape, Northern Cape, and Free State have left the agricultural production severely strained. This is turn has affected employment in these areas and caused a constrained supply of products. Many farmers have been forced to sell their cattle because they are unable to provide for them.

The effects on farmers

Speaking to Al Jazeera, cattle farmers from the Northern Cape said the situation is very difficult as there has been very little rain since 2017. They’ve been forced to sell their cattle at a local auction. With the flooding of the market as many other farmers try to get rid of the cattle as well, the prices are very low. This all means that many labourers in the sector have lost their jobs as the cattle are sold or die.

Speaking to The Daily Vox, Afasa’s Peter Mashala said calling for the affected areas to be declared a state of disaster would mean the “government would have acknowledged that the drought has reached the level of disaster.”

In this state of disaster, the government would have to roll out urgent disaster relief and interventions. Additionally, the government could provide subsidies to small-scale farmers who are unable to insure their crops due to the high costs of insurance.

Afasa is doing an assessment with their members and but Mashala it’s “too early to quantify the losses due to farmers having different commodities they produce on the farms.” The drought has affected not only the livestock farmers but it’s affecting farmers across the sector, including those working with fruit and vegetables.

Mashala said that looking at a preliminary report they conducted it shows that in KwaZulu Natal “losses from 20 farmers were estimated at R12.5 million from livestock and crops.” A more comp report on the losses suffered by their members will be released soon. The preliminary report shows that the Free State province is estimating the current losses at over R25 million for both livestock and crops.

Mashala says while the organisation appreciate the efforts by the government in certain parts of the country, it is not enough.

“Most farmers are still battling to recover from the long drought that occurred two to three years ago. The impact of drought over consecutive years requires consecutive years of support in order for black farmers to get back onto their feet,” said Mashala.

With regard to the after-effects of the drought, there is no best-case scenario. Along with the strains being faced by farmers, consumers are also being affected. The loss of crops and livestock means rising food prices. Farmers who do not have adequate insurance and protection will be forced to leave the business. There have also been many reports of farmers dying of suicide due to the bad conditions.

NGO Gift of the Givers has reportedly recorded eight suicides by farmers since 2014 because of drought, and two more suspected to have been due to drought.

“The whole situation threatens the country’s food security as it may lead to low production,” said Mashala.

According to the Economist’s Intelligence Unit’s Global Food Security Index from 2017, South Africa is the most food-secure country on the African continent. Yet, this doesn’t reflect the conditions of the ground with most households in urban and rural areas not being food secure. This doesn’t even account for the households that are not food sovereign. Food sovereignty refers to being able to choose the types of food to eat in addition to having access.

The greatest concern at the moment is the farmers who are suffering due to the drought conditions. They are losing millions of rands and risk losing everything. The effect though is going to be felt for most South Africans, worsening already difficult conditions.