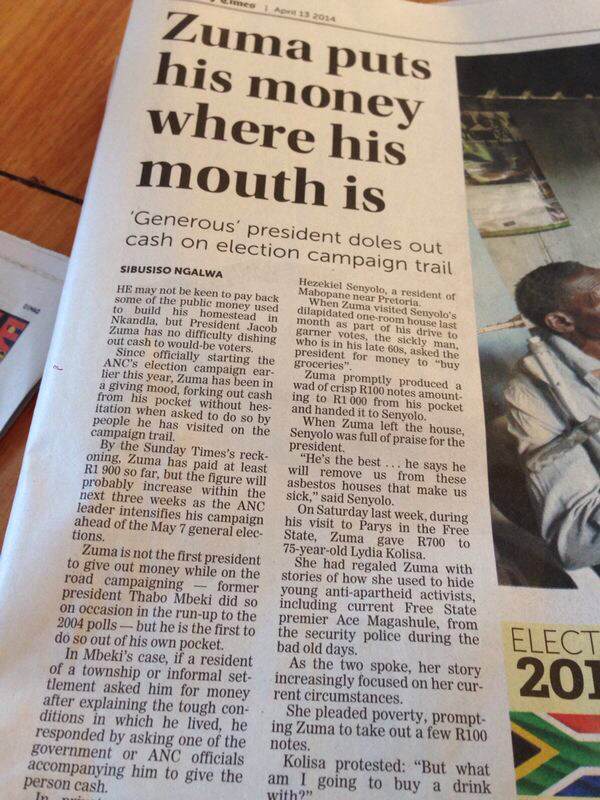 UYANDA SIYOTULA writes to the Sunday Times about an article that appeared in the paper reporting President Zuma is doling out cash on the campaign trail.

On April 13, the Sunday Times carried a startling article titled â€œZuma puts his money where his mouth isâ€ describing how President Zuma went at lengths to distribute money â€“ a paltry R1900-00 – during his trip to the homes of ANC supporters.

As a journalist covering election stories, I was quite shocked by the framing of the story. The title is firstly misleading, suggesting that Zuma was living up to his promises, when in actual fact, he was merely donating money to those whom he visited. Zuma is described to be in a â€œgiving moodâ€, his actions â€œgenerousâ€ because he took money out of his own pocket.

Moreover, Zuma is compared with former President Thabo Mbeki whom it was said had to borrow money from his officials when he was on the campaign trail. This is a cheap shot.

That Zumaâ€™s actions amount to day light bribery, seems to be lost on the reporter and the editorial staff of the Sunday Times. It is as if the reporter forgets that the money is taxpayerâ€™s money â€“ that it was never his money in the first place.

The bias and lack of objectivity in this article cannot be ignored and must be questioned, considering that we are meant to be holding up to our leaders â€“ as a way to hold them to account, not to help decorate them.

The beneficiaries of the Presidentâ€™s â€œgenerosityâ€ are poor citizens from poverty stricken communities, with poor housing. Never mind that they do not have basic services, but the story turns their trouble into a sideshow, focusing primarily on Zumaâ€™s â€œgenerosityâ€. This poor representation of voters as easily bought and subjective citizens is offensive, and problematic. At the sight of the presidentâ€™s notes did these people really just forget about their daily challenges and demands for a better life?

When I was at the ANCâ€™s rally in Eldorado Park last weekend, even the most loyal ANC supporters had a list of complaints but said they will vote for the ANC because of the good it has done. But they were not blind to the faults of the party. Representing Zuma in such a manner is misleading and disappointing.