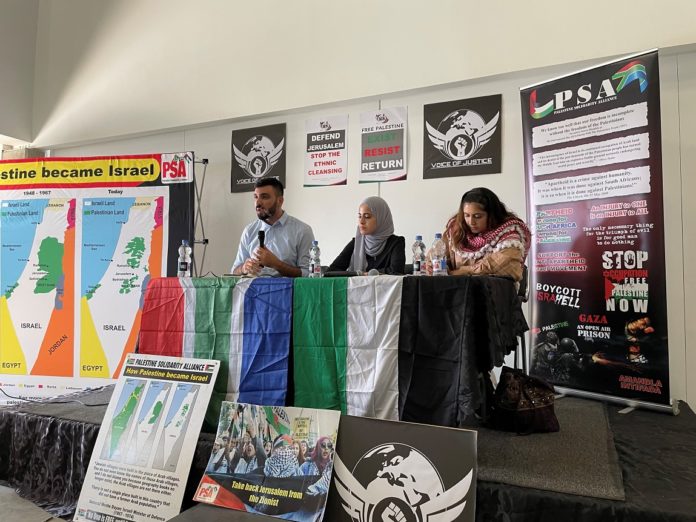 In May, the world’s attention turned to Palestine and in particular the neighbourhood of Sheikh Jarrah. The apartheid Israeli government began evicting Palestinian residents from the neighbourhood. This sparked international outcry as the world watched Israeli forces attempt expelling Palestinians from their homes. Muna El-Kurd has become one of the young voices associated with the fight to save Sheikh Jarrah and the struggle for a liberated Palestine.

In October El-Kurd visited South Africa during a tour organised by Palestinian solidarity groups. The Daily Vox team sat down with her for an interview. This was El-Kurd’s second visit to South Africa. In 2019, she visited the country under banner of the Palestinian Youth Movement (PYM).

What inspired you to take up activism?

Living under occupation is hard. It is exhausting. When faced with such a reality, how can one not take up activism? Every day, Palestinians must find new ways to resist Israeli occupation and brutality. These modes of resistance are connected to each other and come in different forms. Education is resistance, graffiti is resistance, and we must do all that we can to resist.

El-Kurd along with her twin brother Muhammed and many other young people from Sheikh Jarrah have been using social media to raise their plight. El-Kurd and her family have been resisting settlers in their home for many years.

How to help Palestine when the world isn’t watching

What is your role as a young woman – and by extension, all young women – in the struggle for Palestine?

Women are incredibly important to the struggle. As a young woman, I believe that it is my duty to resist oppression in all forms. I think about my mother, my grandmother, and all the brilliant women who came before me. They are all sources of inspiration to me. As women, we must go to the frontlines and make sure that our voices are heard. The Palestinian struggle needs women.

What are the parallels you would draw between apartheid Israel and aparthied South Africa?

Many South Africans have said that Israeli apartheid is far more severe than South African apartheid. Indeed, they are similar in many ways. A lot of commonalities emerge when looking at the two. Both saw external forces exerting violence on the indigenous population. Although apartheid in South Africa is said to have come to an end, the reality we see on the ground is very different. One day, the occupation of Palestine will come to an end. When this happens, we will not share our land with the Israeli colonisers.

What kind of solidarity is needed from South Africans to advance the liberation of Palestine?

Palestinian Youth Are Trying To Forge Their Own Future

Given that October is mental health awareness month, how does living under occupation affect your mental health?

When I opened my eyes to life, the first thing I saw was a settler in my house. I have seen Israeli soldiers beat my father, arrest my grandmother, and abuse my neighbours. I have seen them damage Masjid al-Aqsa and damage our property. Of course this has had a negative effect on my mental health. The occupation has had a negative effect on the mental health of every Palestinian. But we are strong people. We draw our strength from justice, from the people who support us, and from the resistance movement.

How can social media be used to counter oppression?

Social media is an effective tool which can be used to combat oppression. We used social media to tell the world about our plight. We used #SaveSheikhJarrah and #FreePalestine and got them trending. This attracted international attention. Netanyahu, who was the Israeli prime minister at the time, tried thrice to halt social media access. He was unsuccessful. As the youth, we must use social media to get our messages across. Although social media is helpful, a two-prong approach is required – social media and work on the ground.

What is the future of the Palestinian resistance, particularly in the wake of the movements in May?

The Palestinian resistance is growing. Ben Gurion once said “the old will die and the young will forget” and Palestine would be erased once and for all. This was not the case. Although the old have died, the young still remember and will continue to do so until Palestine is free. I hope to see the rise of popular resistance. I believe in the power of Palestinians mobilising on the ground. Whether it be from the Palestinian diaspora or anywhere else, I hope to see the rise of international solidarity.